Poll: 85 percent of voters say top priority is to make sure legal votes are counted correctly

A vast majority of voters said the top priority amid inconclusive election results should be making sure every legal vote is correctly counted instead of having the results of the election as soon as possible, a new Hill-HarrisX poll finds.

Eighty-five percent of registered voters in the Nov. 2-4 survey said every legal vote should be counted correctly.

By contrast, 15 percent said having the results of the election as soon as possible should be the higher priority. 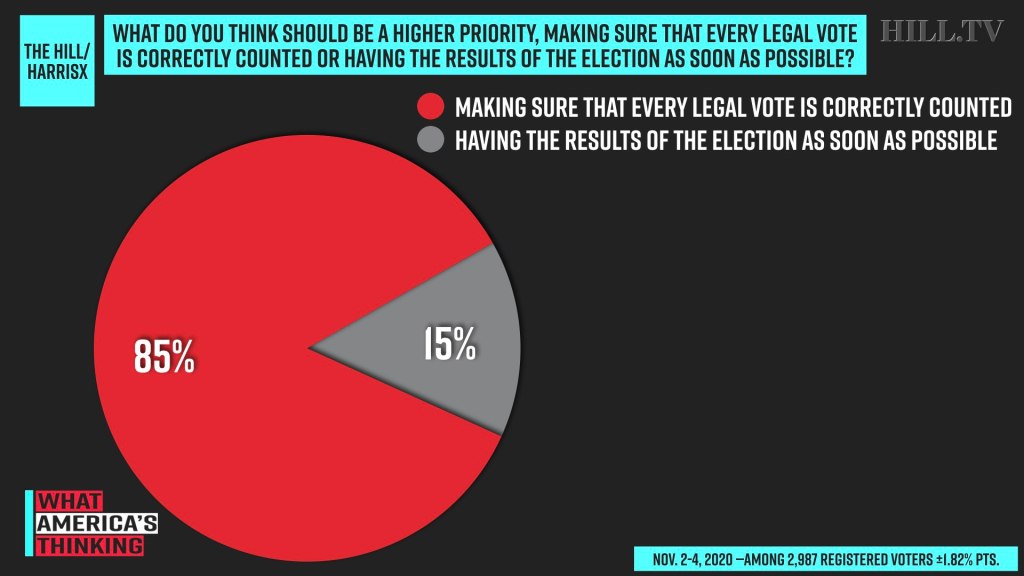 A recent Hill-HarrisX survey found that 78 percent of voters said it’s inappropriate to claim victory before all the votes are counted.

“Voters almost universally agree that it’s more important to count all votes over having a result as soon as possible, and they want the candidates not to claim victory prematurely and to eventually accept the results of the election and call on their supporters to do the same,” Dritan Nesho, CEO and lead pollster of HarrisX, told Hill.TV.

“This view and expectation is consistent from before and after Tuesday’s vote,” Nesho added.

The poll results come after President Trump has claimed premature victory and cast doubt on the electoral system following Election Day, claiming that Democrats are stealing the election by cheating in key battleground states.

Democratic nominee Joe Biden currently leads Trump in vote tallies in the battleground states of Arizona, Nevada, Georgia and Pennsylvania, an indication that the former vice president is inching closer to electoral victory.

The Hill-HarrisX poll was conducted online among 2,987 registered voters. It has a margin of error of plus or minus 1.82 percentage points.