A slim majority of voters say they support the idea of expanding the Supreme Court, a new Hill-HarrisX poll finds.

Fifty-two percent of registered voters in the Oct. 25-28 survey said they either strongly or somewhat support increasing the number of seats on the high court, while 48 percent oppose such a move.

The poll found that 64 percent of Democratic voters are in favor of expanding the court, with one-quarter saying they strongly support it. Meanwhile, 59 percent of Republican respondents and 52 percent of independents said they oppose increasing the number of seats on the court. 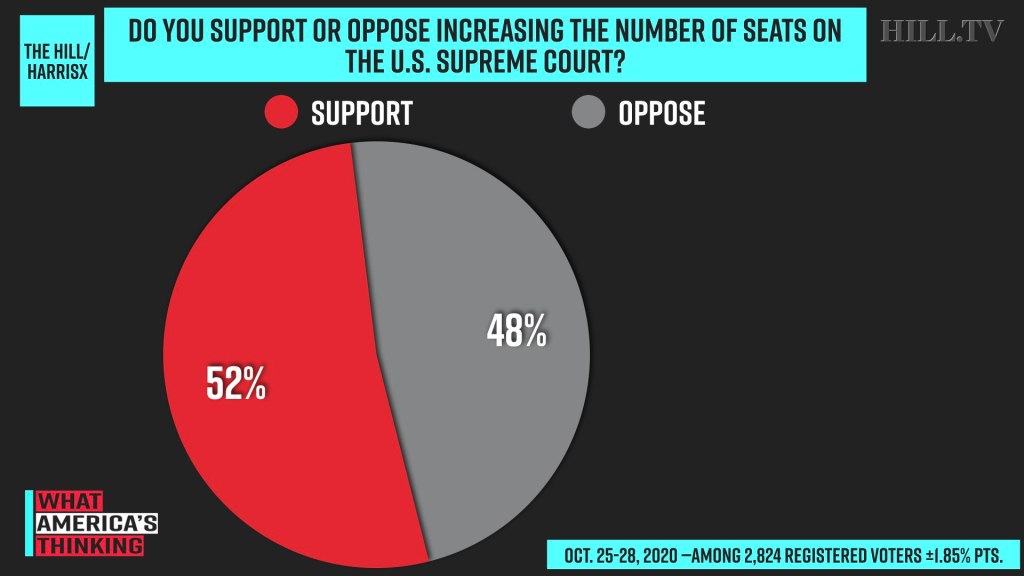 It was the first time the question was asked in the Hill-HarrisX poll, which was conducted the same week the Senate voted to confirm Justice Amy Coney Barrett, President Trump’s third pick for the high court.

Some progressives have called for expanding the size of the court in the wake of liberal Justice Ruth Bader Ginsburg’s death, with several Democratic lawmakers supporting such a move after Republicans signaled they would push to fill the vacancy before the election.

Many Democrats tamped down on such talk before the election, even as conservatives celebrated the prospect of having a bolstered 6-3 majority on the court.

The Hill-HarrisX poll was conducted online among 2,824 registered voters and has a margin of error of 1.85 percentage points.