Poll: 66 percent of voters disapprove of how Congress is handling its job

Two-thirds of voters say they disapprove of how Congress is handling its job, a new Hill-HarrisX poll finds, as lawmakers scramble to pass another coronavirus relief bill and a bill to fund the government this month.

Sixty-six percent of registered voters in the Dec. 3-7 survey said they disapprove of the work being done by Congress, including 32 percent who strongly disapprove.

Meanwhile, 34 percent of respondents said they approve of how Congress is handling its job, with just 8 percent saying they strongly approve. 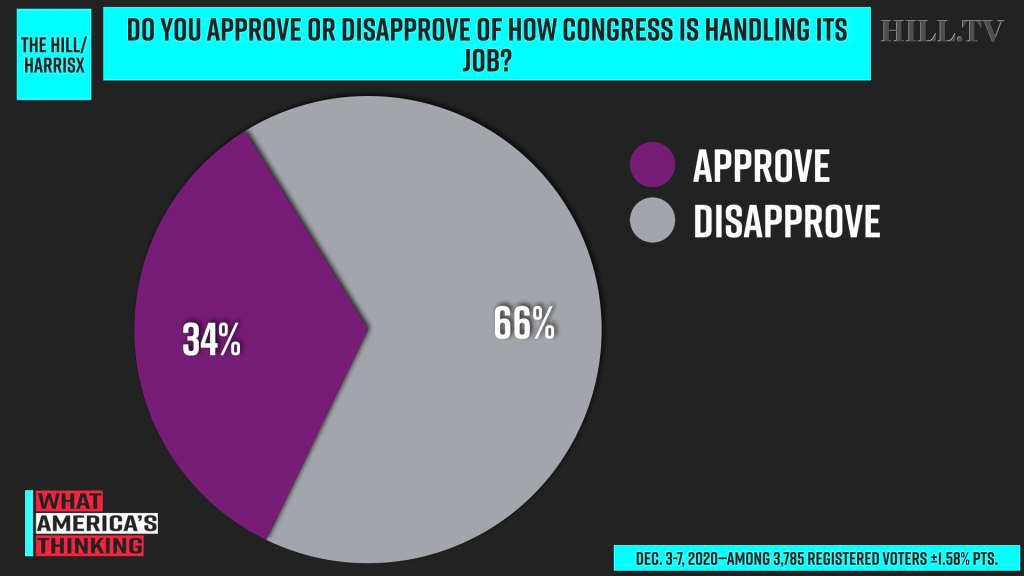 The survey found younger respondents were more forgiving than their older counterparts.

Forty-eight percent of 18 to 34-year-olds and 46 percent of 35 to 49-year-olds approved of how Congress was handling its job. Among those over the age of 50, less than a quarter approved of the work done by Congress.

A majority of respondents across political ideologies disapproved of how Congress is doing its job, the poll found, including 67 percent of Republicans, 62 percent of Democrats and 71 percent of independents.

“Ratings of Congress and congressional leaders remain low and are hurt by partisan gridlock on high-profile issues like coronavirus relief and the next economic stimulus bill,” Dritan Nesho, chief pollster and CEO of HarrisX, told Hill.TV.

“Voters are practical and want action; their view is akin to the old adage: when your house is burning you do not squabble over the size of the firehose,” Nesho added.

The House is expected to pass a one-week funding bill on Wednesday to avert a government shutdown as lawmakers continue to negotiate details of a fifth coronavirus relief package before the end of the year.

The Hill-HarrisX poll was conducted online among 3,785 registered voters. It has a margin of error of 1.58 percentage points.