A majority of voters disapprove of President Trump pardoning members of his family before leaving office, a new Hill-HarrisX poll finds.

Fifty-five percent of registered voters in the Dec. 3-7 survey said they do not support Trump pardoning family members before exiting the White House.

By contrast, 45 percent of respondents said they approve of the notion. 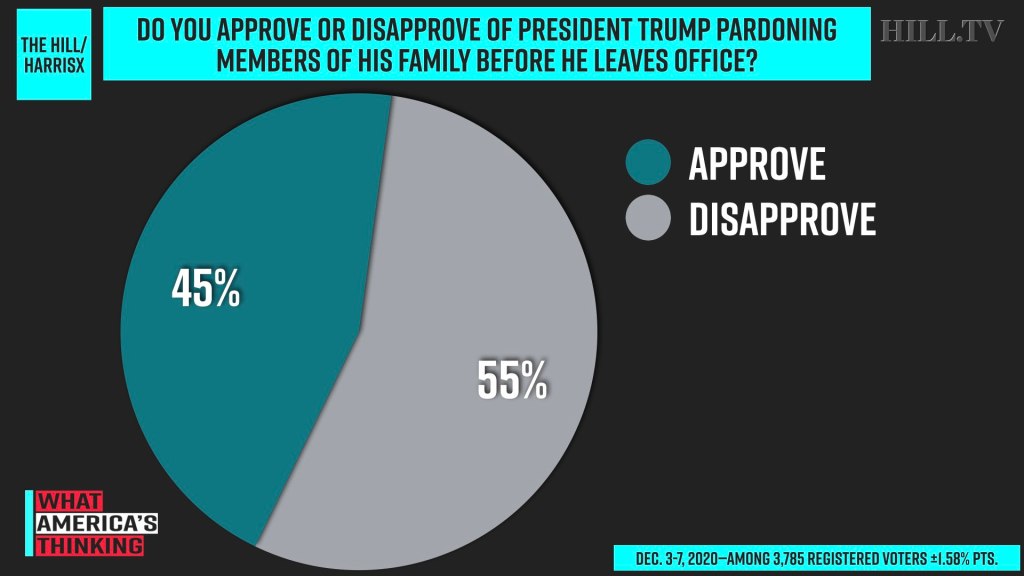 On the other hand, 77 percent of Democrats and 60 percent of independents disapprove of the idea.

“Support for Trump preemptively pardoning his family members is slightly lower than his overall approval, suggesting the move will be controversial and opinions on it will largely break around partisan lines,” Dritan Nesho, CEO and chief pollster at HarrisX, told Hill.TV.

“But the who, what, and why of any eventual pardon, as well as the context in which it is done and the messaging around it, will determine how the public ultimately reacts to the action. It’s likely that voters will disapprove of the action but also do not think it is an important issue,” Nesho added.

While Trump has not yet pardoned any members of his family in the last weeks of his presidency, The New York Times reported earlier this month that discussions were taking place among Trump and his advisors surrounding potential preemptive pardons of Trump’s family members and close allies.

The Hill-HarrisX poll was conducted online among 3,785 registered voters. It has a margin of error of 1.58 percentage points.