Poll: Support for keeping health care system ‘as is’ up 12 points from last year

The number of voters who support keeping the current health care system “as is” has risen 12 percentage points in the last year, a new Hill-HarrisX poll finds.

Twenty-six percent of registered voters in the Dec. 3-7 survey said the country’s current healthcare system should be kept the same, up from 14 percent who said the same in a Feb. 2019 survey. 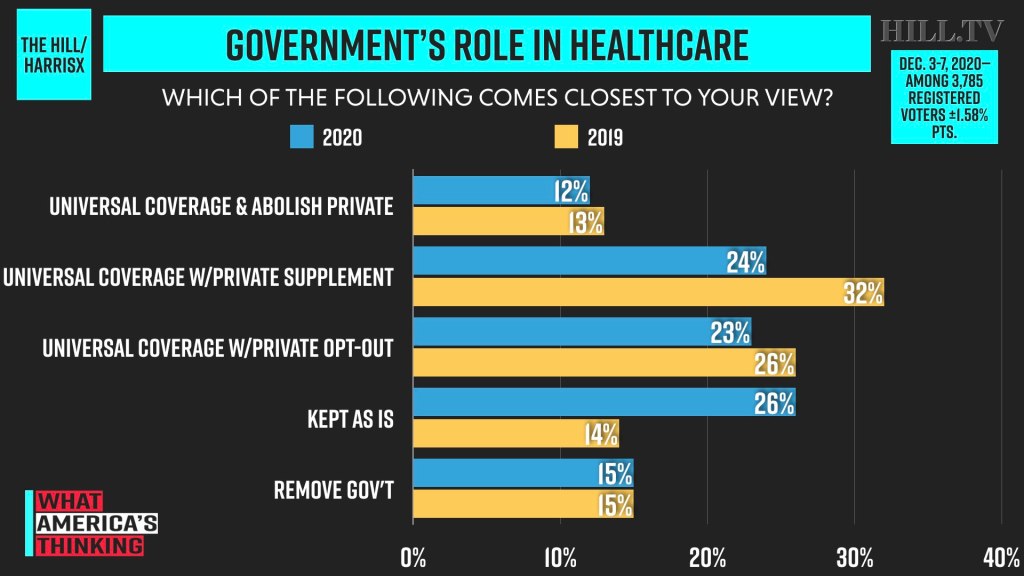 The survey found that while most voters want to provide coverage in some form to all Americans, they do not want to abolish private insurance, consistent with last year’s study.

Twenty-four percent of respondents said they want Medicare/Medicaid should be expanded to cover all citizens regardless of age or income, but that people should be able to purchase private supplemental plans.

Twenty-three percent said any citizen should be able to sign up for Medicare/Medicaid regardless of age or income while those with private plans could keep their existing insurance.

Fifteen percent of voters said the government should remove itself from paying for all health care.

And only 12 percent said Medicare/Medicaid should be expanded to cover all citizens regardless of age or income and private health plans should be abolished, down 1 percentage point from 2019.

“The support for government-provided health care is sort of locked in and the coronavirus hasn’t really changed it,” Lee Miringoff, director of the Marist Poll, told Hill.TV.

“There is a support for a concept of universal health care but people want options,” Miringoff added.

An April 19-20 Hill-HarrisX survey of this year found 69 percent of voters support providing Medicare to all Americans.

The Hill-HarrisX poll was conducted online among 3,785 registered voters. It has a margin of error of plus or minus 1.58 percentage points.