Three-fourths of voters surveyed in a new Hill-HarrisX poll say $600 in coronavirus relief payments is “too little.”

By contrast, 15 percent of registered voters in the survey, which was conducted Dec. 30 to Jan. 3, said it’s about the right amount of money and 8 percent said it’s too much. 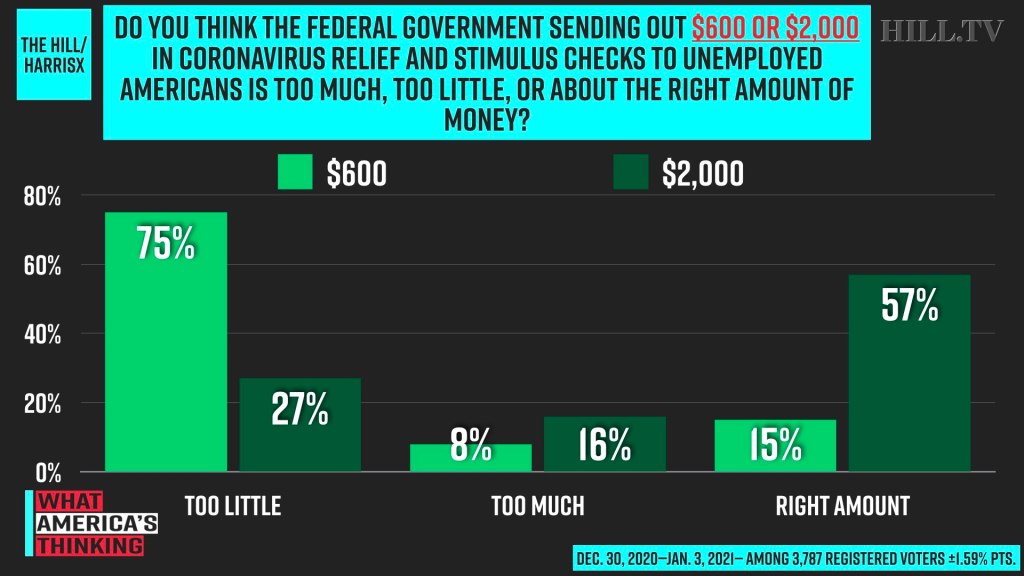 Majorities of voters from both parties agreed that $600 in relief payments is too little.

Seventy-seven percent of Democrats and independents said the amount is insufficient while 71 percent of Republicans agreed.

The survey also found 57 percent of voters said $2,000 in stimulus checks is “about the right amount.”

“Voters across party affiliation and income levels are of a consistent view that $600 in COVID relief is too little and a strong majority agree with President Trump and the Democrats that $2,000 is an appropriate amount and more support is needed,” Dritan Nesho, CEO and chief pollster at HarrisX, told Hill.TV.

“This sentiment is a pressure point for Senate Republicans as the Biden administration takes office and could lead to another round of COVID relief and stimulus,” Nesho added.

The survey follows a bipartisan effort to increase the amount of direct payments.

President Trump has also voiced support of increasing relief checks to as high as $2,000.

Last week, Senate Republicans blocked a House-passed bill that would have increased direct payments from $600 to $2,000.

The new Hill-HarrisX poll was conducted online among 3,787 registered voters. It has a margin of error of  1.59 percentage points.