A majority of voters believe the storming of the U.S. Capitol by supporters of President Trump was mostly incited by the actions of a mob of people, a new Hill-HarrisX poll finds.

Fifty-percent of registered voters in the Jan. 6-7 survey said the Wednesday’s attack on the U.S. Capitol was caused by actions taken by the mob. 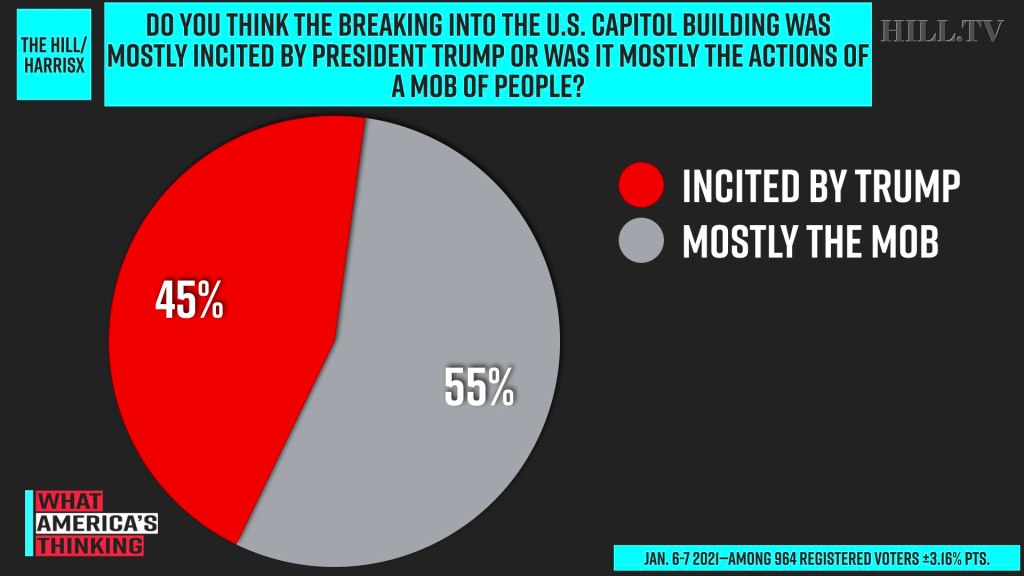 Trump, during a speech at a Washington, D.C., rally on Wednesday encouraged a group of his supporters to march on the Capitol while Congress worked to certify the election results that broke for President-elect Joe Biden in November.

Following his comments, rioters breached the Capitol security, breaking windows and vandalizing lawmakers’ offices. The breach forced lawmakers, staff and media to evacuate both chambers of Congress and hide in undisclosed locations.

Since then, Trump’s remarks have been condemned by lawmakers on both sides of the aisle, and some have called for his removal from office.

The survey found voters split on the issue of removing Trump from office.

Forty-nine percent of voters said Trump’s handling of the riots were grounds for impeachment while 51 percent said there was no basis for the procedure.

On the issue of invoking the 25th amendment, the poll found 49 percent of respondents in favor and 51 opposed.

Recent Hill-HarrisX data shows 59 percent of voters disapproved of Trump’s handling of Wednesday’s events and 61 percent said he should do more to stop the violence.

“Voter opinion on whether and how to hold president Trump accountable for this week’s storming of the Capitol is split, with the issue being divisive and breaking strongly along partisan lines, and independents unsure of which direction to go,” Dritan Nesho, chief researcher and CEO of HarrisX, told Hill.TV.

“Opinions can change and decisions by leaders across the aisle will matter in determining voters’ ultimate reaction. What we know as of now is that 45 percent of voters believe the riots were mostly incited by President Trump, 55 believe they were mostly the actions of a mob, with a majority of Republican voters and Trump voters still standing by the president at this stage,” Nesho added.

The Hill-HarrisX poll was conducted online among 964 registered voters. It has a margin of error of plus or minus 3.16 percentage points.