A plurality of voters support the push to impeach and remove President Trump, a new Hill-HarrisX poll finds.

Forty-four percent of registered voters in the Jan. 8-11 survey said they support Trump’s impeachment and removal from office, while 18 percent said Trump should be censured and 38 percent said no action should be taken toward him.

While 44 percent back Trump’s impeachment and removal, that is down from the 48 percent who supported Trump’s first impeachment a year ago. 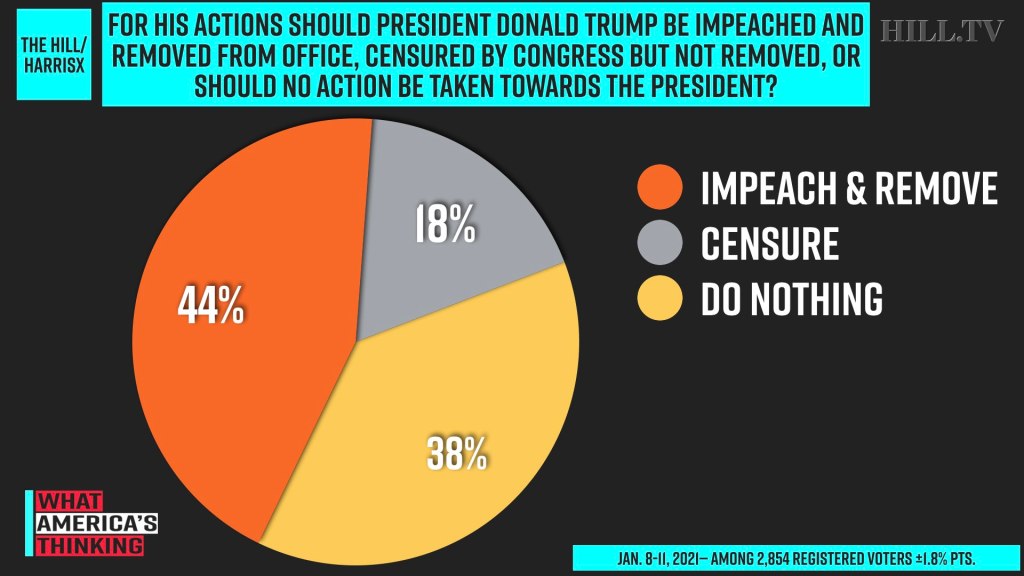 Seventy-nine percent of Democrats in the latest poll said Trump should be impeached and removed for his actions, down 1 percentage point from last year’s survey. By contrast, 71 percent of Republicans said no action should be taken, 7 percentage points more than in 2020.

A plurality of independents, 38 percent, sided with Democratic voters in backing Trump’s removal.

“Voters are torn on whether or not to impeach Trump, and between asking for accountability or moving on and focusing on focal issues like coronavirus and the economy. Overall 44 percent support impeach and remove, 38 percent think no action should be taken, and 18 percent would like Congress to censure the president — almost exactly the same numbers Trump had going into the last impeachment battle. And like last time the electorate splits strongly along partisan lines,” Dritan Nesho, CEO and chief pollster at HarrisX, told Hill.TV.

“Independents are the key battleground here and evenly split between impeachment plus removal and no action should be taken. As we reported last week in the Hill-HarrisX poll a majority of independents believe there are grounds for impeaching Trump but lesser numbers believe another impeachment should drag on into the new administration or that Trump should be removed with eight days left in office,” Nesho added.

The House moved Wednesday to impeach Trump for inciting an attack against the Capitol last week, distinguishing him as the only president in U.S. history to be impeached twice. Several Republicans backed the measure on Wednesday, though it’s unclear whether the Senate will vote to convict Trump.

The Hill-HarrisX poll was conducted online among 2,854 registered voters. It has a margin of error of plus or minus 1.8 percentage points.