Poll: 64 percent of GOP voters say they would join a Trump-led new party

A majority of Republican voters said if former President Trump were to start a new political party they would likely join, a new Hill-HarrisX poll finds.

Sixty-four percent of registered Republican voters in the Jan. 28-29 survey said they’d join a new political party led by the former president, including 32 percent who said they would very likely join.

By contrast, 36 percent of Republican respondents said they are either very or somewhat unlikely to join. 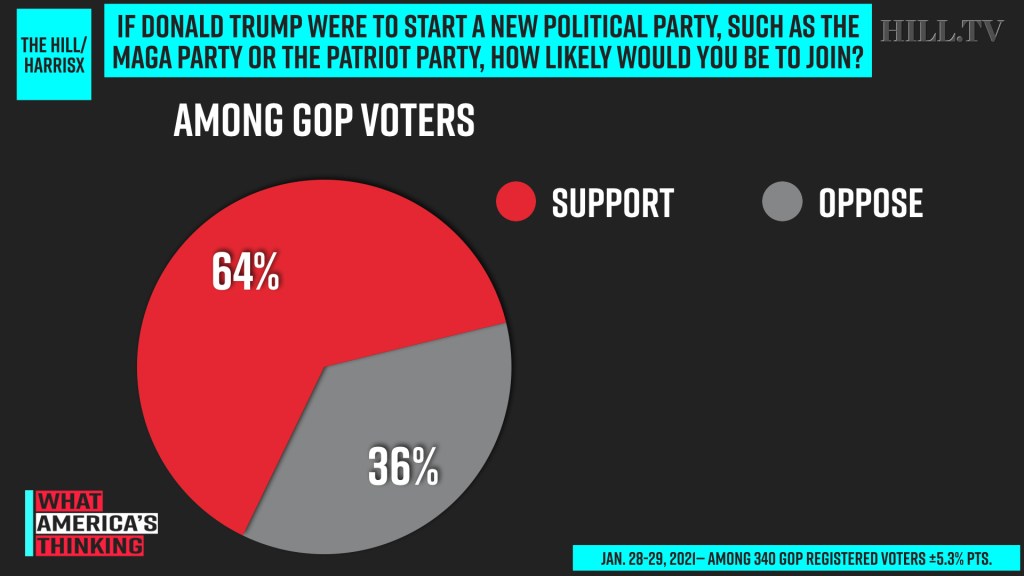 The survey found 28 percent of independents and 15 percent of Democrats said they’d likely join a third party led by Trump.

“These numbers show that despite the Capitol riots Trump remains a political force to be reckoned with. He benefits from a diverse base of support making up over a third of voters, voters who are attracted to him on a number of issues that are yet to be properly addressed by, and coopted by, Democratic and Republican elites,” Dritan Nesho, CEO and chief pollster at HarrisX, told Hill.TV.

“If Trump were to split from the GOP and create his own party, polling suggests he might well create the second largest political party in the country, knocking the GOP down to third place,” Nesho added.

The most recent Hill-HarrisX poll was conducted online among 945 registered voters, 340 of which self-identified as Republicans. It has a margin of error of +/- 3 percentage points.