Fifty-two percent of registered voters say the Senate should convict former President Trump in his impeachment trial and bar him from running for office, a new Hill-HarrisX poll finds.

Forty-eight percent of those who responded in the Feb. 8-9 survey said the chamber should acquit and not restrict the former president from holding future office. 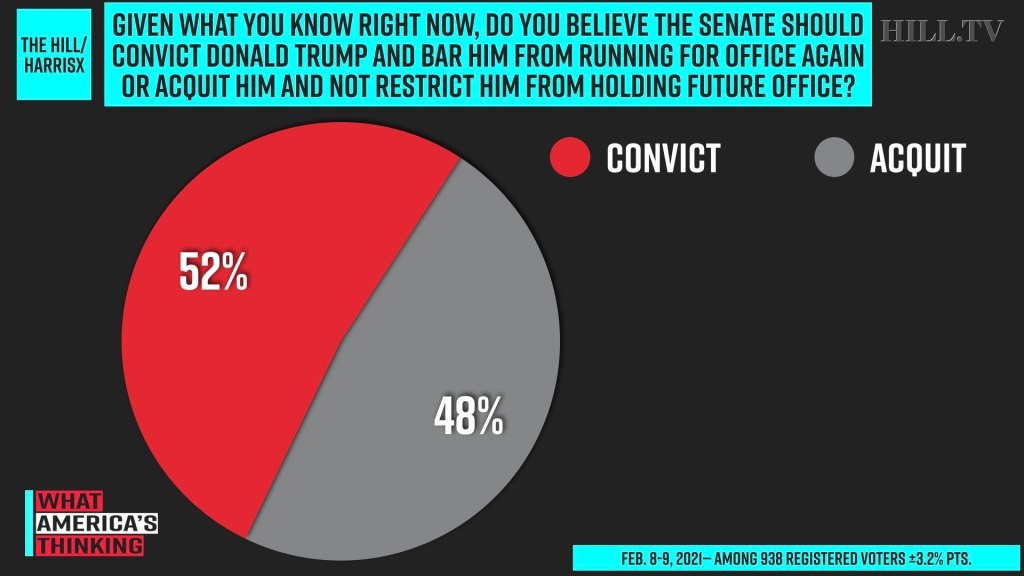 The survey comes as the Senate impeachment trial is ongoing as House managers present their case for convicting Trump and barring him from seeking future office.

The survey found 83 percent of Democrats said they believe the Senate should convict Trump, along with 53 percent of respondents who identified as independents.

Eighty-two percent of Republican respondents said they believe the Senate should acquit the former president.

“Trump’s second impeachment trial raises a set of complicated political and constitutional questions that has resulted in a split public on the issue. The public is also generally tired of impeachment processes,” Dritan Nesho, CEO and chief pollster at HarrisX, told Hill.TV.

“Voters are split on whether to hold an impeachment trial on a former president in the first place, and are unclear what the penalty for a conviction should be. It is therefore not surprising to see voters also split on the key question of whether Trump should be convicted and barred from running for office again, or whether to acquit Trump and not restrict him from holding future office, ” he added.

“One thing we see clearly is that 82% of Republicans want Trump acquitted and the core group in the middle, independents, are divided 53-47 on this question. It is unlikely that this type of public opinion will sway any Senate votes needed to reach the threshold of conviction,” Nesho also added.

The House impeached Trump just before he left office. He was impeached for his role in the deadly Jan. 6 riot at the Capitol.

The most recent Hill-HarrisX poll was conducted online among 938 registered voters. It has a margin of error of plus or minus 3.2 percentage points.

8 hours ago
Rising
3 days ago