A majority of voters approve of the Democrats using budget reconciliation to pass coronavirus relief, a new Hill-HarrisX poll finds.

The survey comes as Congress passed a budget resolution this month to allow for budget reconciliation, a process which would allow them to pass another coronavirus stimulus bill with a simple majority.

By contrast, 33 percent of respondents said they do not support the move. 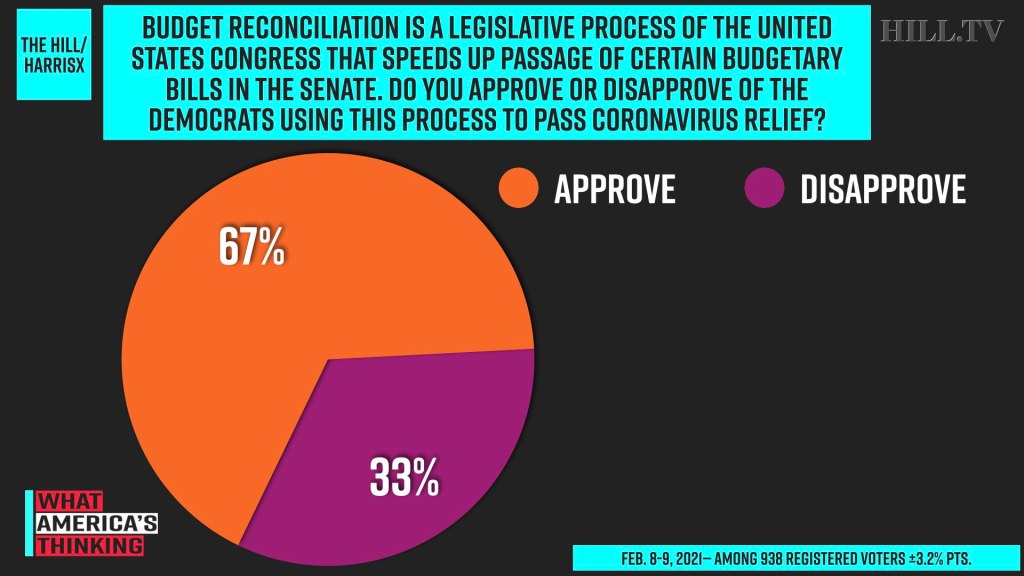 The survey finds 94 percent of Democrats support using budget reconciliation to further relief legislation along with 68 percent of independents.

Earlier this month, Vice President Harris cast her first tie-breaking vote in the Senate to pass the budget resolution that would allow for Congress to pass a version of President Biden’s $1.9 trillion coronavirus stimulus package.

“The yeas are 50. The nays are 50. The Senate being equally divided, the vice president votes in the affirmative. And the concurrent resolution as amended is adopted,” she said in the early morning hours on Feb. 5, according to ABC 7.

The Hill-HarrisX poll was conducted online among 938 registered voters. It has a margin of error of  +/- 3.2 percentage points.