Sixty percent of registered voters in the Feb. 8-9 survey said the support Biden as president, a 1-point dip from last week’s poll.

By contrast, 40 percent of respondents disapprove of Biden’s job thus far in the White House. 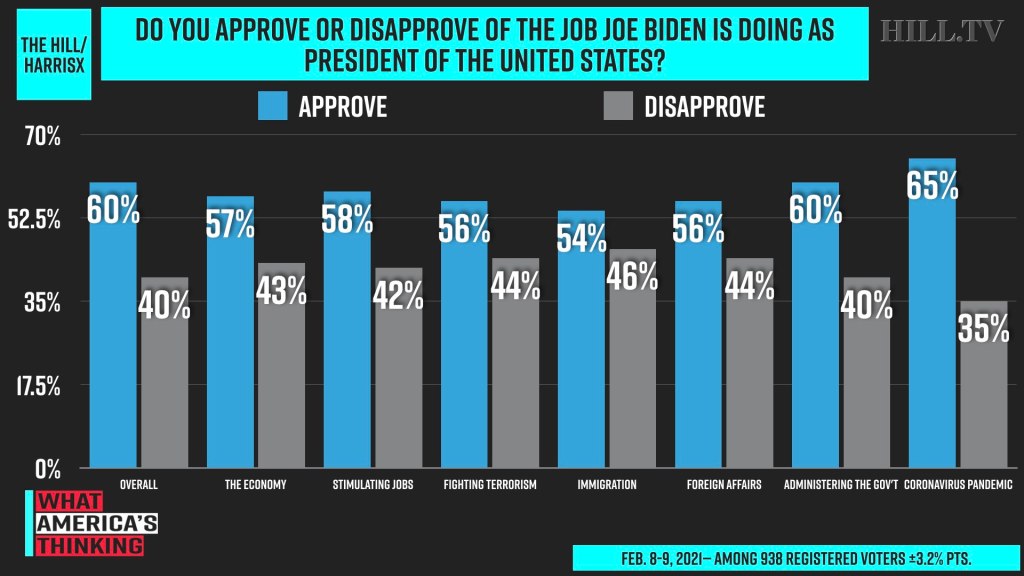 Fifty-seven percent of voters approve of President Biden’s handling of the economy and 58 percent approve of his efforts to stimulate jobs.

According to the poll, Biden’s highest areas of approval are in the areas of administering the government and handling the coronavirus pandemic.

Biden and his administration have repeatedly stated that their first priority is delivering medical and financial aid to the American people amid the coronavirus pandemic.

Sixty percent of voters support Biden on administering the government and 65 percent support his handling of the virus.

Biden announced earlier this week that the government has purchased 200 million more coronavirus vaccines, part of the administration’s efforts to ramp up the number of inoculations administered within his first 100 days in office.

Biden began his term with 63 percent support, including 69 percent of those who approved of his handling of the pandemic.

The most recent Hill-HarrisX poll was conducted online among 938 registered voters. It has a margin of error of 3.2 percentage points.