Ninety percent of registered Democratic voters in the Feb. 12-15 survey said they have a very or somewhat favorable view of the Democratic Party, up slightly from 88 percent in a March 2020 poll. 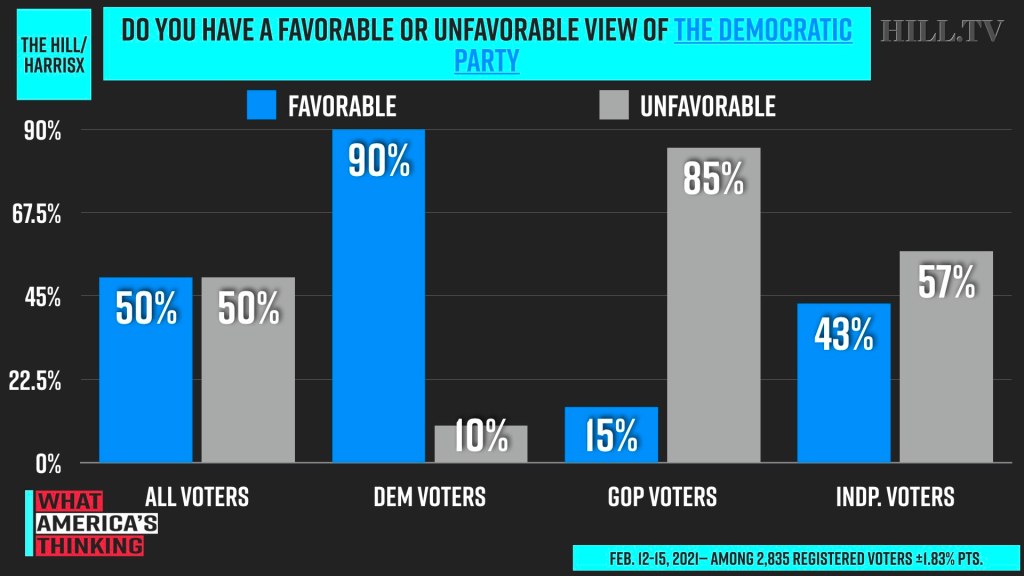 By contrast, 78 percent of Republican respondents said they view the Republican Party very or somewhat favorably, down from 91 percent in last year’s survey. 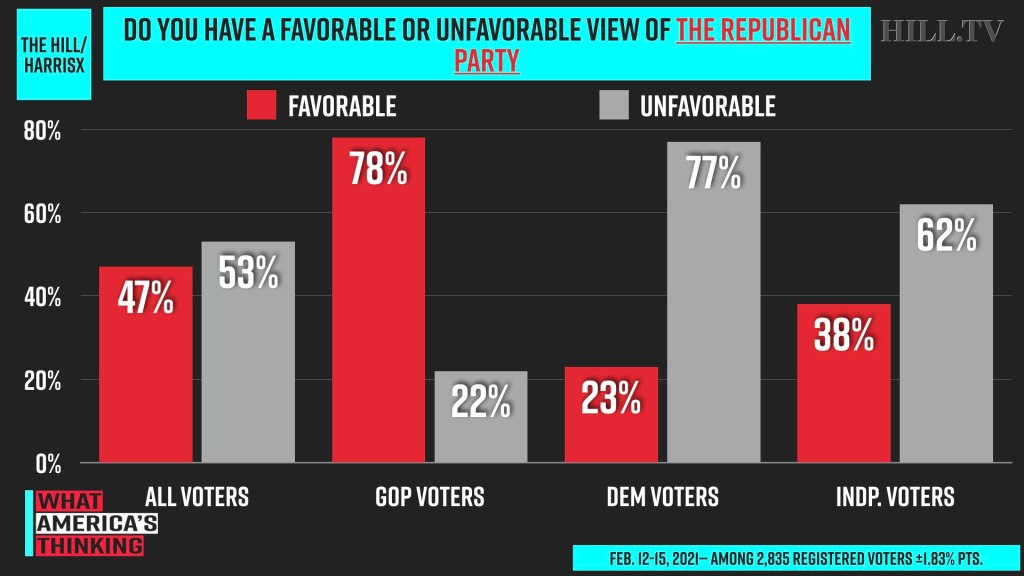 Overall, voter favorability was down from last year for both major political parties.

The poll was taken after President Joe Biden’s inauguration and the second impeachment of former President Trump, which showcased divides among GOP political leaders in the wake of the Jan. 6 mob attack on the Capitol.

“When I step back and try to get a sense of why people like or dislike the Republican Party or Democratic Party the first thing I think about is this last poll we put out which shows that a significant amount of Republicans are embracing a fairly wide variety of conspiracy theories,” Daniel Cox, Director of the Survey Center on American Life and research fellow at the American Enterprise Institute, told Hill.TV.

Many of the people in the pro-Trump mob who attacked the Capitol believed falsely that an election victory had been stolen from Trump. Some in the crowd chanted for the hanging of former Vice President Mike Pence out of a mistaken belief he could have taken steps to ensure Trump remained president.

A recent Survey Center on American Life poll found roughly 30 percent believe that Trump has been secretly fighting a group of child sex traffickers that include prominent Democrats and Hollywood elites to be a mostly or completely accurate statement.

The survey also found a majority of Republican respondents believe Biden’s 2020 victory was not legitimate and there was widespread voter fraud in the election.

“I’m really interested in seeing if Republicans continue down this road and if the leadership doesn’t try to distance itself from these beliefs whether there’s an electoral price to pay,” Cox added.

Senate GOP Leader Mitch McConnell (R-Ky.) has harshly criticized Trump for his role in riling of his supporters beforr the attack, though he voted to acquit the former president on the charge that he incited the mob.

A recent Hill-HarrisX poll found that 64 percent of Republican voters said if Trump were to start a new political party they would likely join.

The most recent Hill-HarrisX poll was conducted online among 2,835 registered voters. It has a margin of error of 1.83 percentage points.

4 days ago
Rising
6 days ago