President Biden’s job approval is steady at 61 percent as his 100th day in office approaches, a new Hill-HarrisX poll finds.

About six in 10 registered voters in the April 16-19 survey approve of the job Biden is doing as president, steady from last week’s poll. By contrast, 39 percent of voters disapprove of Biden’s performance.

The survey finds broad approval for Biden’s handling of the coronavirus pandemic — 68 percent — while nearly a third of voters, 32 percent, disapprove of his efforts. 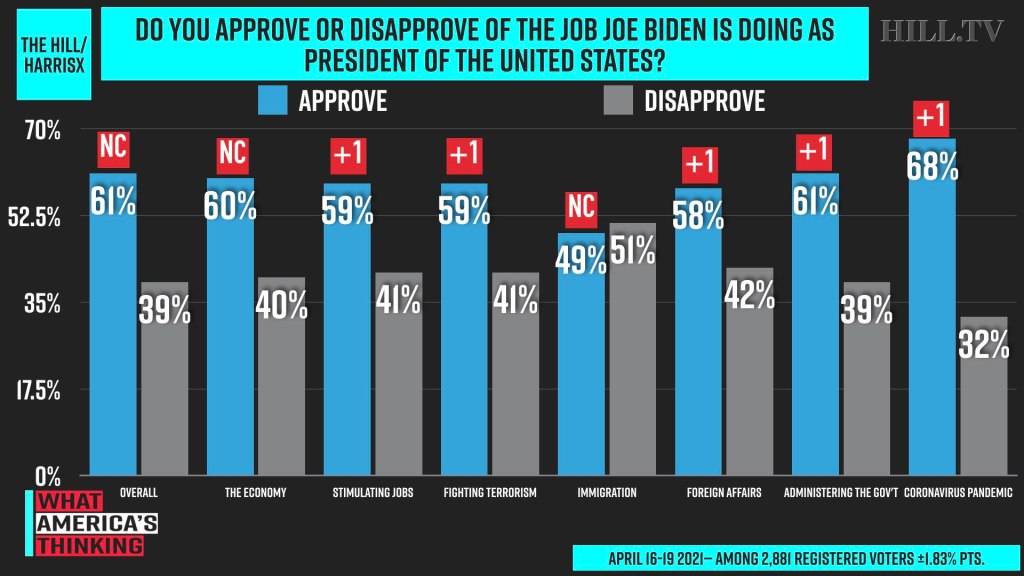 “Voters wanted President Biden to focus mainly on covid relief and vaccinations in his first 100 days in office and he has delivered on both fronts, leading to a high approval of 61 percent that’s also been fairly steady over the last month,” Dritan Nesho, chief pollster and CEO at HarrisX, told Hill.TV.

“It remains to be seen whether his high approval can be sustained by the opening up of vaccinations to all U.S. adults and the economy gearing back up, or whether the administration’s newer tax-and-spend and deficit spending initiatives will harm it.”

Biden receives his lowest marks on immigration, with 49 percent supporting him on the issue. The administration has faced a surge in migrants at the southern border, putting a strain on federal resources.

“Biden’s handling of the immigration crisis, where he’s viewed lot more critically, has also failed to hurt the president’s overall approval rating, suggesting that immigration is not a salient issue yet for voters and the GOP has struggled to make it such,” Nesho added.

The Hill-HarrisX poll was conducted online among 2,881 registered voters. It has a margin of error of 1.83 percentage points.