An overwhelming majority of voters support the US withdrawal from Afghanistan, a new Hill-HarrisX poll finds.

Seventy-three percent of registered voters in the April 24-27 survey said they approve of President Biden’s plan to remove US troops from the country by September 11, the 20th anniversary of the terrorist attacks that ignited the conflict.

By contrast, 27 percent of respondents disapprove of the plan to withdraw. 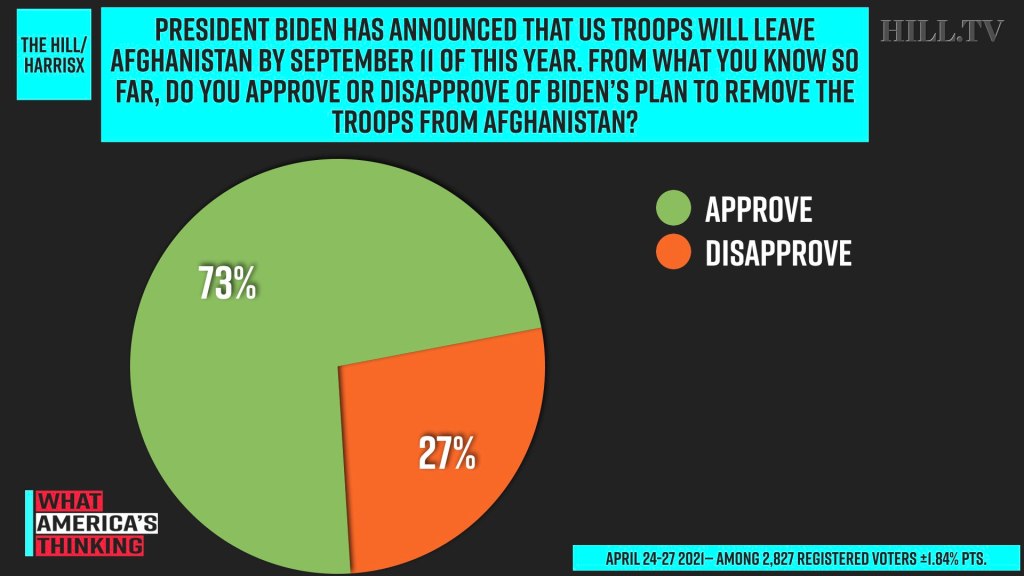 Ninety percent of Democrats and 75 percent of independents support the decision along with 54 percent of Republicans.

The survey found support across demographics, with 90 percent of Black voters, 84 percent of Hispanic voters and 67 percent of white voters approving of the removal.

President Biden on Wednesday reiterated his intentions of removing US troops from Afghanistan during his first address to a joint session of Congress.

Biden has received bipartisan pushback from lawmakers citing fears of creating a leadership vacuum that could be filled by the Taliban.

The White House confirmed Thursday that the U.S. military withdrawal from Afghanistan has officially begun.

The most recent Hill-HarrisX poll was conducted online among 2,827 registered voters. It has a margin of error of 1.84 percentage points.