The survey comes as the Biden administration faces mounting pressure to support a proposal led by India and South Africa that would waive an international intellectual property agreement that protects pharmaceutical trade secrets.

Backers of the move argue it would enable lower-income countries to manufacture the vaccines themselves while those opposed say it could make the vaccine less safe and damper production in existing locations. 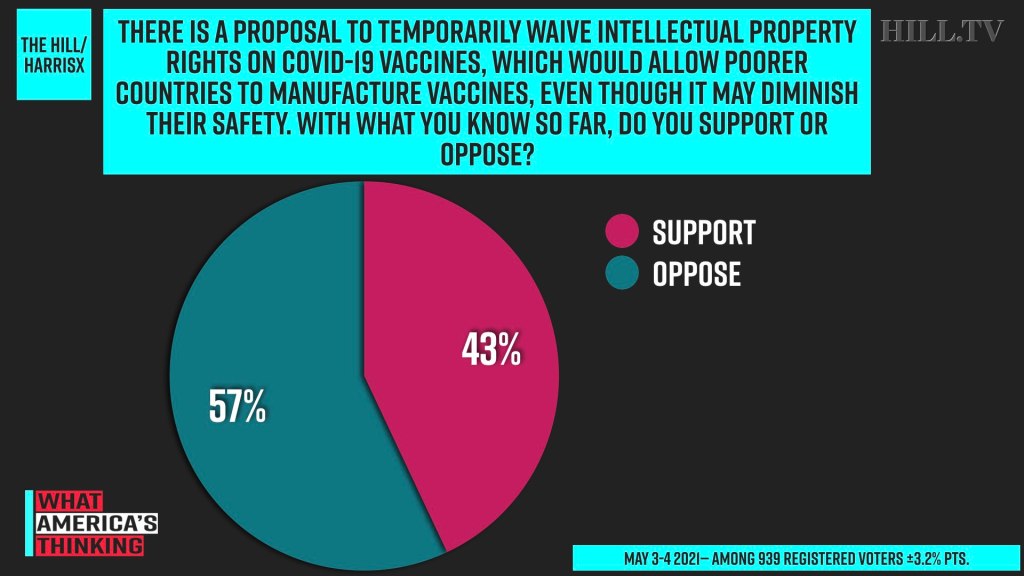 Sixty-four percent of Republican voters along with 52 percent of both Democratic and independent voters said they oppose waiving the intellectual property rights of vaccines.

“This is a complex issue with a remarkably sophisticated understanding by the public. The tension is as follows: On one hand you have the need to protect the intellectual property rights of the scientists and companies that brought about the fastest vaccine in history, and will likely need to produce new versions of the shot even faster to battle evolving strains,” Dritan Nesho, chief researcher and CEO of HarrisX, told Hill.TV.

“On the other hand there’s the need to save lives, reaching global heard immunity and providing access to the vaccine as broadly and equitably as as possible,” Nesho continued.

“Today a majority of 57 percent of U.S. voters would like to protect the intellectual property of vaccine makers, but as more and more people are vaccinated in advanced economies, voter pressure for broader and more equitable distribution will rise,” Nesho added. “Already we see Democrats and independents here split on the issue of whether or not to waive IP rights to provide greater access to the vaccines.”

President Biden is expected to weigh in on the proposal at a World Trade Organization meeting on Wednesday.

The most recent Hill-HarrisX poll was conducted online among 939 registered voters. It has a margin of error of 3.2 percentage points.