A majority of voters said passing President Biden’s infrastructure plan with bipartisan support is more important than getting it passed as quickly as possible.

Sixty-nine percent of registered voters in the May 14-15 survey said it is more important the bill be passed with support from both Democrats and Republicans.

By contrast, 31 percent of respondents said it is more important that the legislation be passed as quickly as possible. 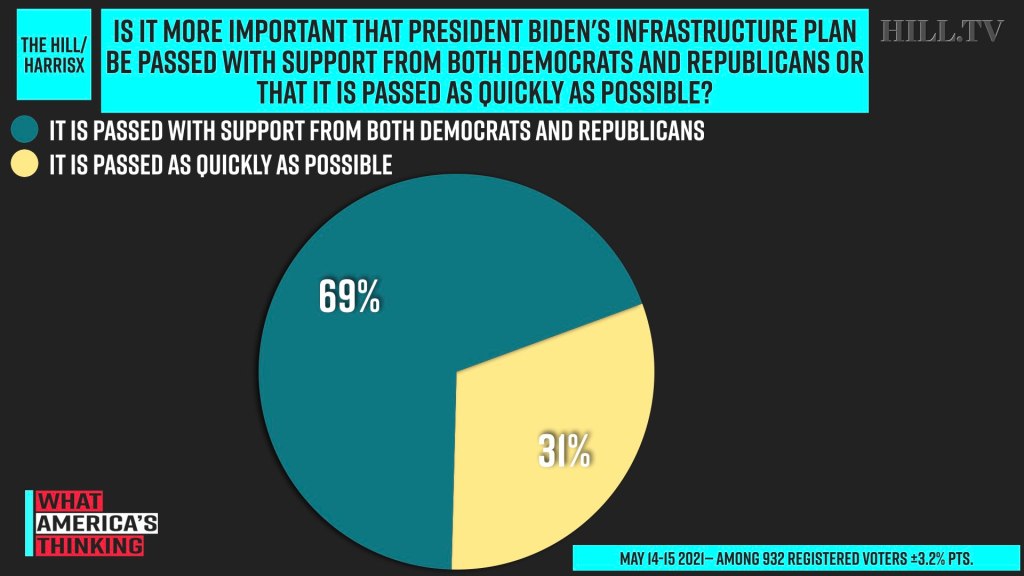 The survey found a majority of voters across party affiliation favored bipartisanship when it came Biden’s infrastructure plan.

Eighty-five percent of Republican voters said it is more important to pass the plan with support from both Democrats and Republicans along with 61 percent of independent voters and 58 percent of Democratic voters.

“For several years now there’s been overwhelming support across the political spectrum for the need to upgrade the country’s infrastructure and invest in the future competitiveness of the U.S. economy. Where there’s disagreement is in how much to spend and how to do it,” Dritan Nesho, chief pollster and CEO of HarrisX, told Hill TV.

“Today Biden’s infrastructure plan faces the political counter pressures of taxation and inflation which worry voters about trillions more in government spending. Therefore, 69% of voters — and 58% of Democrats themselves – support a compromise, bipartisan bill on infrastructure reform rather than Democrats moving unilaterally to pass it as quickly as possible. Polling also shows voters would prefer a price tag of around $1 to $1.5 trillion with social welfare spending elements left out of the bill as well as more involvement of private sector funds for infrastructure,” Nesho added.

The administration has also proposed a $1.8 trillion investment in U.S. families, called the “American Families Plan,” what the White House has characterized as part of the country’s infrastructure.

The bill would revamp the country’s child care, education and paid family leave.

Republicans, however, have balked at the spending plan overall stating that they are open to addressing traditional infrastructure such as repairing roads and bridges.

Talks have stalled on Capitol Hill as Biden aims to gain support from lawmakers on both sides of the aisle.

The most recent Hill-HarrisX poll was conducted online among 932 registered voters. It has a margin of error of 3.2 percentage points.