A vast majority of voters support U.S. action against China if evidence is found proving that the coronavirus was leaked from a Wuhan lab, a new Hill-HarrisX poll finds.

Eighty-three percent of registered voters in the May 30-June 1 survey said they support the U.S. government taking action towards China if new intelligence reveals that COVID-19 originated in a lab in the city, while 17 percent of respondents oppose any action. 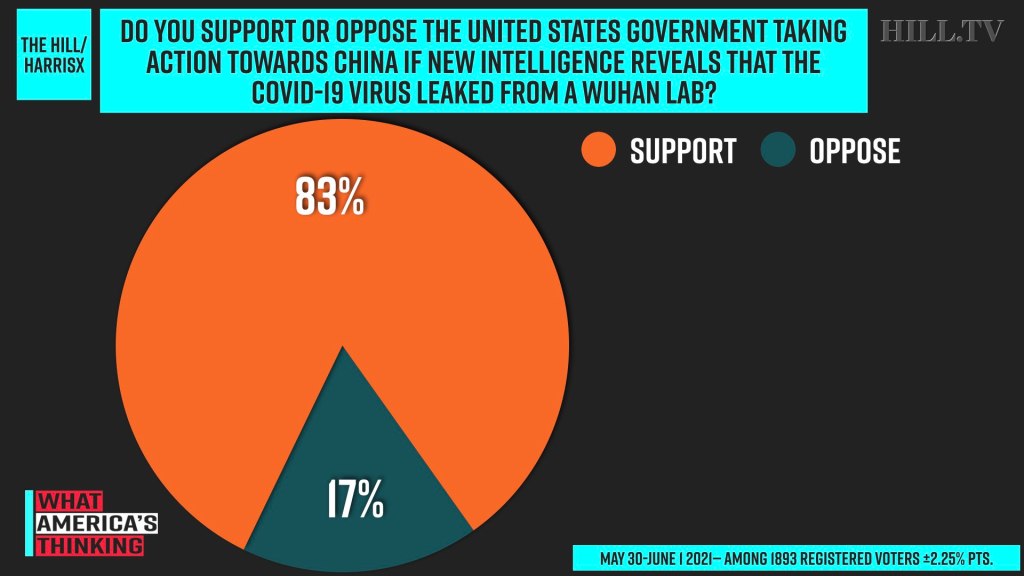 While the origins of the virus remain unclear, health officials and experts have lent more credibility to the idea that it could have come from a lab in Wuhan instead of originating naturally within animals, which was the prevailing theory for more than a year.

President Biden last week ordered U.S. intelligence agencies to investigate and report back on the origins of the COVID-19 virus, which has killed roughly 600,000 Americans and millions world wide.

The Hill-HarrisX survey found strong support from voters across party lines to impose action on China if new evidence reveals the lab leak theory to be true.

Eighty-seven percent of Republicans, 83 percent of Democrats, and 80 percent of independents said the U.S. should take action against China in that event.

As to what kind of action, 30 percent of voters said they would support a call for a global tax on Chinese products to make up for the economic damage sustained by the world in 2020, and 25 percent said they support requesting China pay reparations to the families of the dead or affected.

Eighteen percent said they support imposing travel and financial sanctions on senior leaders of the Chinese Communist Party responsible for the potential virus leak, while 6 percent called for boycotting the 2022 Beijing Winter Olympics and another 6 percent backed some other option.

Fifteen percent said they prefer no action, saying the leak would have been an accident.

“There is overwhelming consensus among American voters that China should be held accountable if it is shown that the COVID-19 virus originated in and leaked from a Wuhan laboratory,” Dritan Nesho, CEO and chief pollster at HarrisX, told Hill.TV.
“But voters are also pragmatic and want accountability without unnecessary antagonism. The preferred course of action is having China to pay for the damage the coronavirus caused, with 25% requesting reparations from China for those affected by COVID19 and 30% calling tor a global tax on Chinese products to make up for the economic damage sustained by the world. Only 18% would respond with sanctions on senior Chinese leadership and 6% want to boycott the 2022 Olympics,” Nesho added.

The Hill-HarrisX poll was conducted online among 1,893 registered voters. It has a margin of error of 2.25 percentage points.

6 hours ago
THE HILL TV
8 hours ago