A majority of voters say they do not think President Biden’s chief medical advisor Anthony Fauci should resign, a new Hill-HarrisX poll finds.

Fifty-eight percent of registered voters said Fauci should not resign.

By contrast, 42 percent of respondents said he should resign. 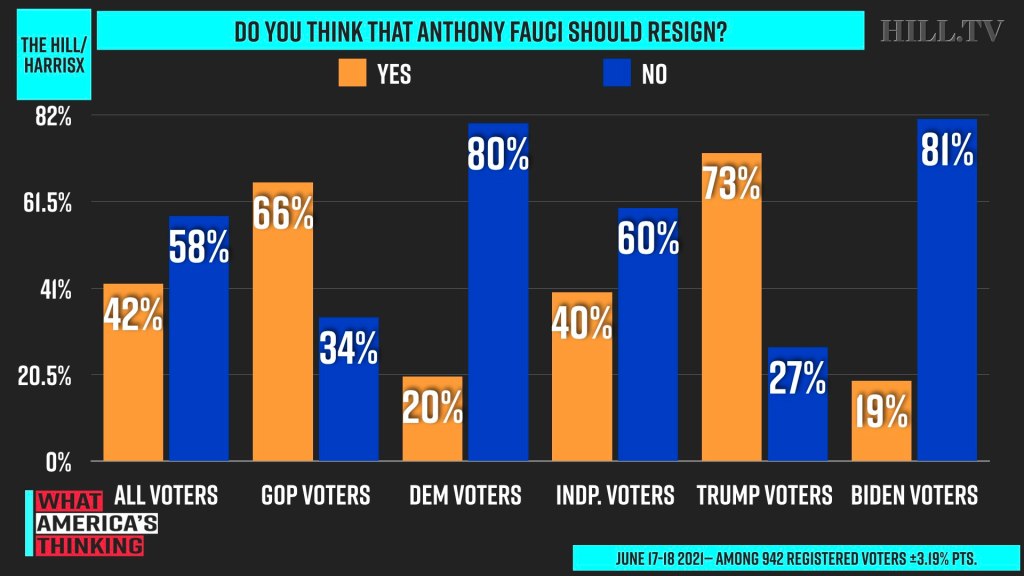 Eighty percent of Democratic voters, 60 percent of independents and 81 percent of Biden voters do not want Fauci to resign.

Sixty-three percent of Republicans and 73 percent of voters who cast their ballots for former President Donald Trump said the country’s top infectious disease expert should resign.

The results underscore the partisan differences over the coronavirus and Fauci, who has been cheered by liberals but heavily criticized by some conservatives, such as Sen. Rand Paul (R-Ky.).

A recent Hill-HarrisX poll found 61 percent said Fauci has been truthful to the best of his knowledge regarding the origins of COVID-19 while 39 percent said he misled the public.

The most recent Hill-HarrisX poll was conducted online among 942 registered voters. It has a margin of error of plus or minus 3.19 percentage points.

What America's Thinking
15 hours ago