More than two-thirds of Americans support a vaccine mandate, according to a new Hill-HarrisX poll.

Sixty-eight percent of registered voters in the July 28-29 survey said they support a vaccine mandate, compared to 32 percent who oppose one.

Among respondents who said they have been vaccinated, 81 percent also back a vaccine requirement.

By contrast, 70 percent of voters who have not received a vaccine and do not have an appointment to get one said they oppose any such mandate. 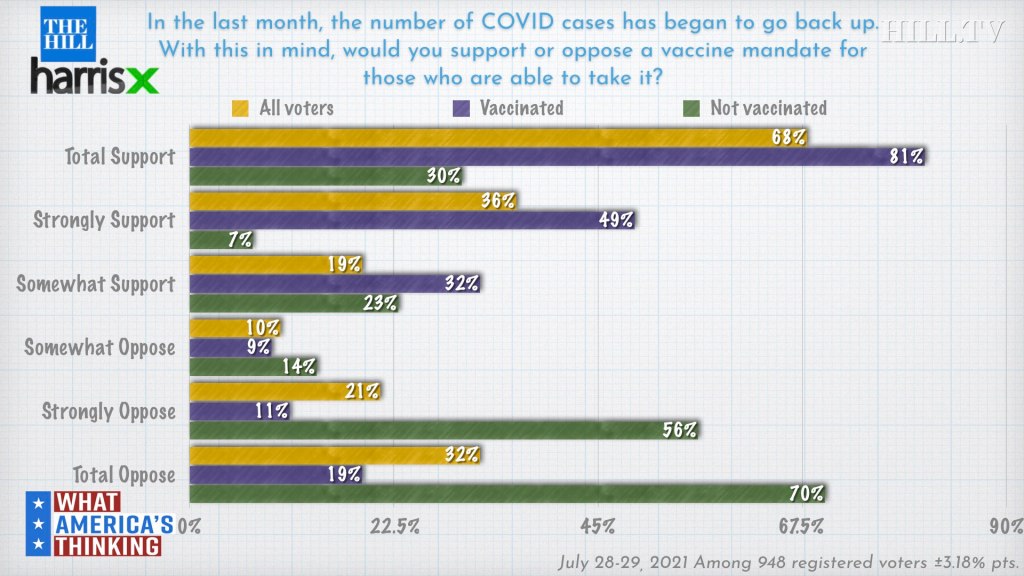 Eighty-seven percent of Democratic voters said they support a vaccine mandate, including 55 percent who said they strongly support the idea, while 13 percent oppose one.

Fifty-one percent of Republican respondents said they oppose a vaccine mandate, while 49 percent said they support one.

Sixty-nine percent of independents supported a mandate, with 31 percent disagreeing.

President Biden on Thursday directed all federal employees and on-site contractors to show that they are vaccinated or otherwise submit to regular coronavirus testing as the delta variant continues to spread and coronavirus cases rise throughout the country.

The most recent Hill-HarrisX poll was conducted online among 948 registered voters. It has a margin of error of 3.18 percentage points.