Voters say inflation is their top economic concern, a new Hill-HarrisX poll finds, as members of both parties warn about rising prices.

Thirty-one percent of registered voters in the Aug. 2-3 survey named inflation as what concerns them the most when thinking about the future of the economy.

This was followed by the national debt, at 22 percent, and unemployment and income inequality, at 15 percent each.

Nine percent of voters said they aren’t concerned about the economy’s future while 7 percent said labor shortages were their biggest concern and 1 percent said something else. 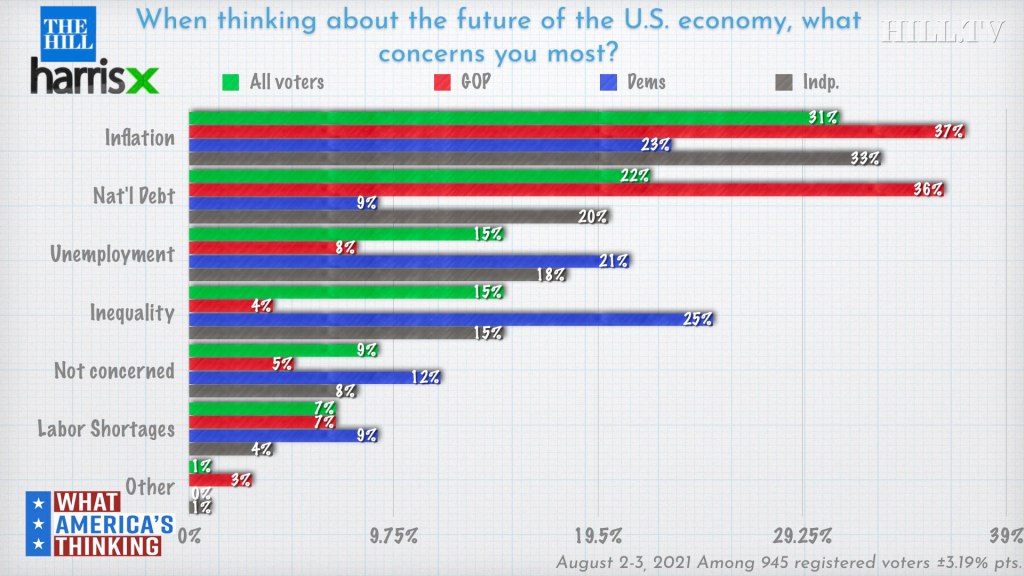 Inflation was listed within the top two concerns for voters across party lines, with Republicans listing it as their biggest concern while Democrats listed it second behind income inequality.

A key inflation gauge used by the Federal Reserve rose 3.5 percent in June, the biggest one-month gain since 1991. Republican lawmakers have attempted to blame President Biden’s economic agenda for rising costs, while Biden and the Federal Reserve argue it has largely been caused by short-term factors.

A recent Morning Consult-Politico poll found that roughly six in 10 voters blame Biden’s policies for the recent rise in prices.

The most recent Hill-HarrisX poll was conducted online among 945 registered voters. It has a margin of error of 3.19 percentage points.