President Biden’s job approval is down 6 percentage points amid the Taliban takeover of Afghanistan, a new Hill-HarrisX poll finds.

Forty-nine percent of registered voters in the Aug. 20-21 survey said they approve of Biden’s performance as president, down from 55 percent at the beginning of the month.

By contrast, 43 percent of respondents in the new poll said they disapproved of Biden, up from 40 percent in early August. 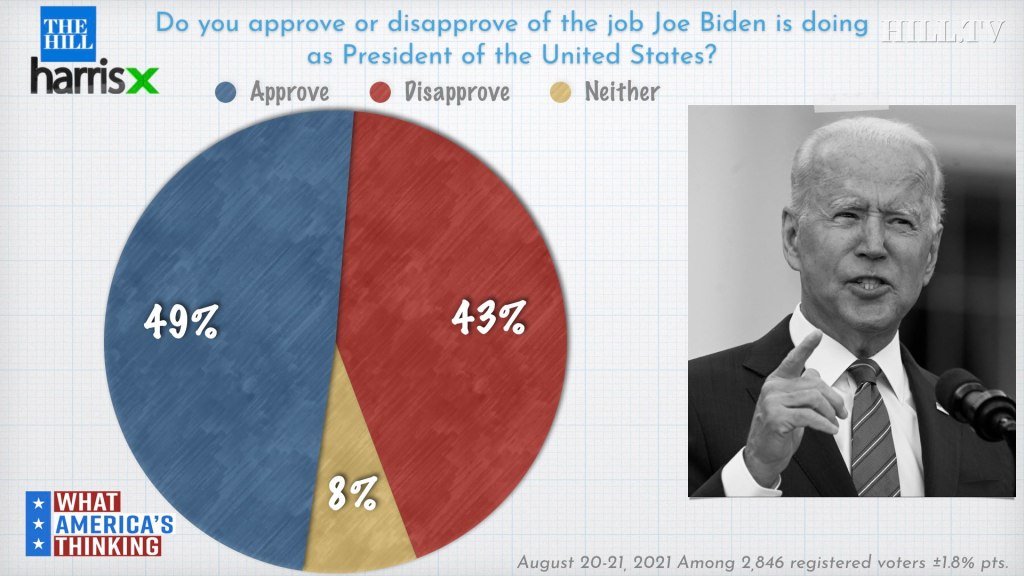 “President Biden is below 50 percent approval for the first time in our poll,” Dritan Nesho, chief pollster and CEO at HarrisX, told Hill.TV.

“His honeymoon with voters has slowly been ending over the last 30 days,” Nesho added. “Now, the mishandled Afghanistan pullout, which voters view as a crisis of Biden’s own making, despite an overwhelming majority agreeing to pulling US troops out of the county, has put Biden’s approval under water.”

Forty-nine percent of respondents said they approved of Biden on foreign affairs, a 5 point dip from the previous survey.

Meanwhile, 55 percent said they approved of Biden’s performance when it came to administering the government and fighting terrorism, both down 3 points from the first week of August.

Biden’s highest marks were in his handling the pandemic, with 61 percent approving of his efforts.

The Hill-HarrisX poll was conducted online among 2,846 registered voters. It has a margin of error of 1.8 percentage points.