Poll: Majority say Biden guilty of mismanaging the US withdrawal from Afghanistan

A majority of voters believe President Biden’s promise to evacuate all Americans currently in Afghanistan, but say he is guilty of mismanaging the U.S. troop withdrawal from the country, a new Hill-HarrisX poll finds.

Fifty-eight percent of registered voters in the Aug. 20-23 survey said they believe Biden when he says all Americans still in Afghanistan will be evacuated while 42 percent said they do not believe him.

Earlier this month, the president sent in thousands of troops back into Afghanistan after the Taliban took over consolidated power in the country and overran the nation’s capital of Kabul. Biden originally announced that the U.S. troops withdrawal would be complete by Aug. 31.

Amid the fall of Kabul, Afghan President Ashraf Ghani fled the country and violence has broken out in the streets leading to the capital’s airport. The chaos has hampered the U.S. government’s evacuation of Americans and Afghan partners from the region.

Fifty-two percent of voters said the decision to send troops back to Afghanistan indicated that Biden is guilty of mismanaging the situation. 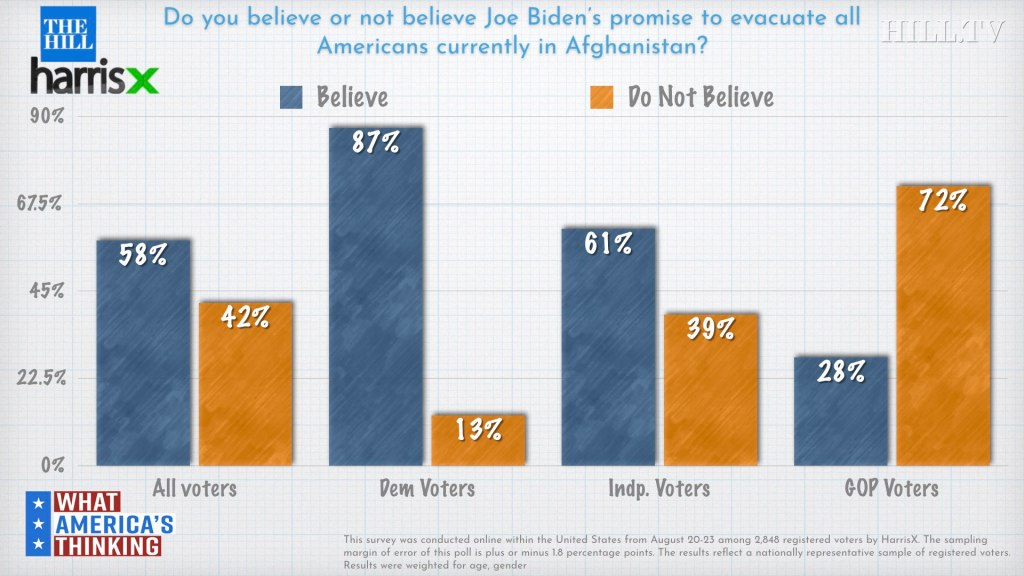 The White House reported it has re-located more than 50,000 people from Afghanistan since the end of July.

“It’s hard for the administration to argue with the facts on the ground, and a majority of voters view the return of thousands of more soldiers into Afghanistan than there were before the evacuation as a clear indication of the mismanagement of the exit from the country by the Biden administration,” Dritan Nesho, chief pollster and CEO at HarrisX, told Hill.TV.

“Voters still believe in President Biden’s promise to get all Americans out by August 31st, and whether that promise is kept or not will be key to the final public opinion verdict on whether this event a is a ‘Pig’ or a ‘Piglet’ in terms of the scope of this foreign policy debacle,” added Nesho, using President Kennedy’s Bay of Pigs foreign policy bounder as an analogy.

This survey was conducted online within the United States from August 20-23 among 2,848 registered voters by HarrisX. The sampling margin of error of this poll is plus or minus 1.8 percentage points.