A majority of voters in a new poll said they think that the House Republican Committee’s probe asserting that the coronavirus originated in a lab in Wuhan, China, and the Chinese Communist Party (CCP) engaged in the “greatest cover-up in human history,” is a true statement, a new Hill-HarrisX poll finds.

Fifty-six percent of registered voters in the Aug. 13-14 and Aug. 16-17 survey said the probe’s conclusion is mostly or somewhat true.

By contrast, 20 percent of respondents said it is mostly or somewhat false and 25 percent said they are unsure. 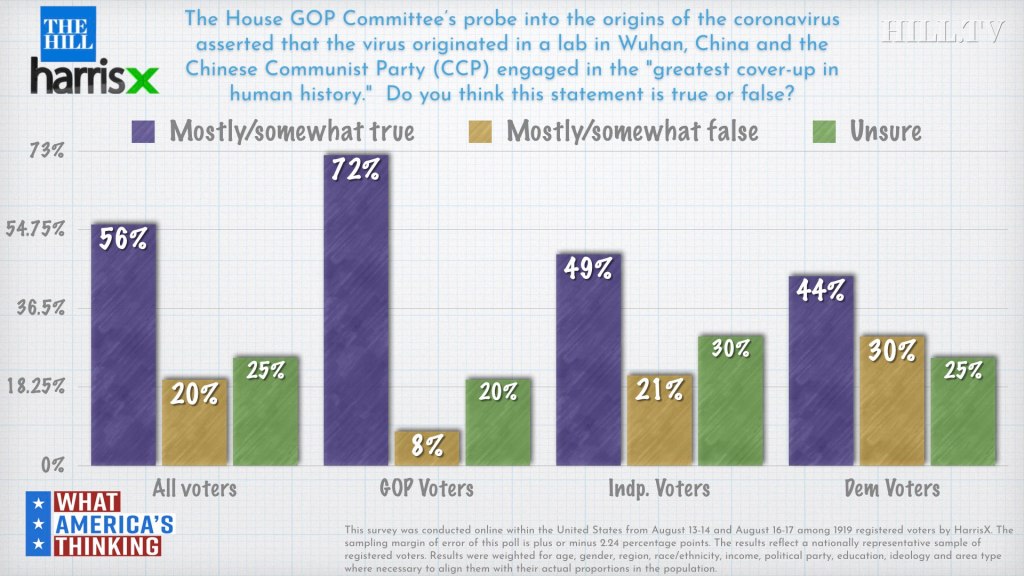 Seventy-two percent of Republican voters said the House GOP probe’s assertion is true while 8 percent said it is not true and 20 percent said unsure.

Pluralities of Democrats and independents said the probe’s conclusion is mostly or somewhat true, at 44 percent and 49 percent, respectively.

A June 7-9 Hill-HarrisX survey found roughly half of voters said they believe the COVID-19 virus was created in a lab in Wuhan, China.

Eighty-three percent of voters in a May 30-June 1 Hill-HarrisX survey said they support the U.S. government taking action towards China if new intelligence reveals that COVID-19 originated in a lab in the city of Wuhan, while 17 percent of respondents oppose any action.

On Tuesday, President Biden received classified findings from an intelligence report on the origins of COVID-19 that could not conclude whether the virus was created naturally or accidentally leaked from a lab.

The most recent Hill-HarrisX poll was conducted online among 1,919 registered voters. It has a margin of error of 2.24 percentage points.