A majority of voters are concerned about the omicron COVID-19 variant, a new Hill-HarrisX poll finds.

Sixty-eight percent of registered voters in the Nov. 29-30 survey said they are either very or somewhat concerned.

By contrast, 32 percent of respondents said they are not very or not at all concerned about the new strain. 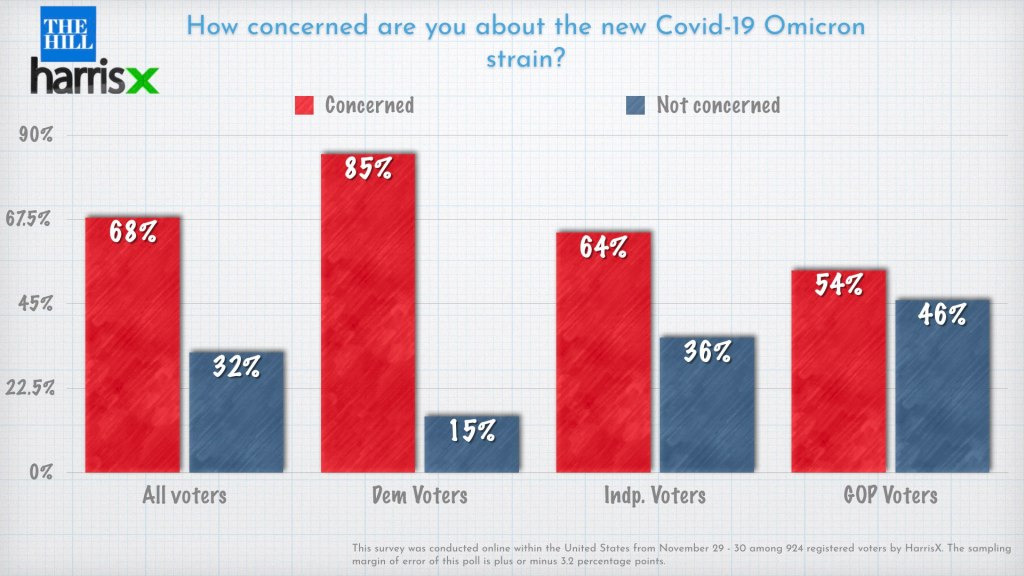 Eighty-five percent of Democrats, 64 percent of independents, and 54 percent of Republicans said they are concerned about the new COVID-19 variant.

The survey also found 36 percent of respondents said they’ve seen, read, or heard a moderate amount about the new strain while 32 percent said only a little bit and 23 percent said a great deal.

By contrast, 10 percent said they have seen, read, or heard nothing at all about the variant.

Last week, the World Health Organization (WHO) designated B.1.1.529 a variant of concern before giving it the name omicron.

President Biden on Monday addressed the nation urging caution, not panic, when it comes to the new COVID-19 strain, saying Americans getting vaccinated and getting their booster shots is the best defense against the virus.

The omicron variant has been detected in several countries but has not yet been detected in the U.S., though, Dr. Anthony Fauci told ABC’s George Stephanopoulos on Sunday it will “inevitably” be spotted stateside.

The Hill-HarrisX poll was conducted online among 924 registered voters between Nov. 29 and 30. It has a margin of error of plus or minus 3.2 percentage points.