The ‘acting’ in his title may be important soon: 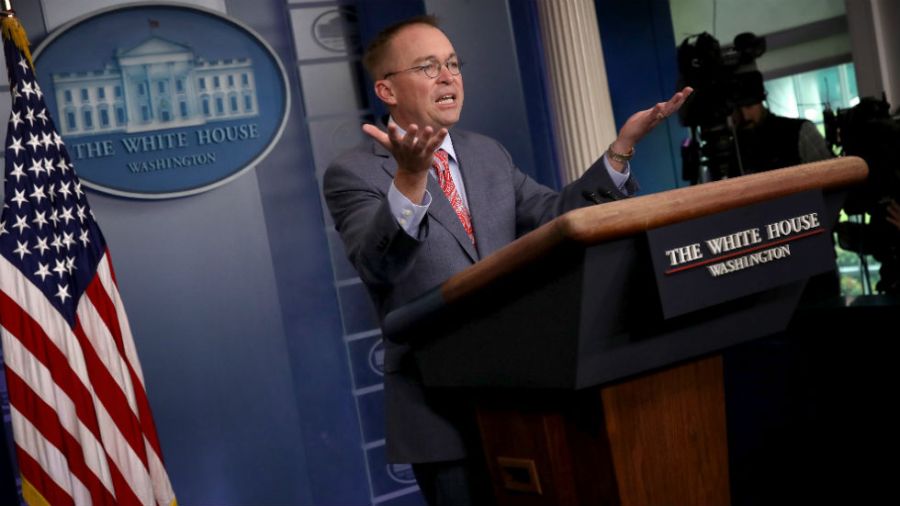 How so: During a press briefing yesterday, Mulvaney admitted that aid to Ukraine was, in fact, tied to President Trump’s desire for the country to launch a political probe related to the 2016 election.

In Mulvaney’s words: “There’s going to be political influence in foreign policy. That’s going to happen.”

Then after the uproar, Mulvaney walked back his remarks and blamed the media: “The president never told me to withhold any money until the Ukrainians did anything related to the server,” Mulvaney said in a statement. “The only reasons we were holding the money was because of concern about lack of support from other nations and concerns over corruption.” http://bit.ly/2MVFlLR

REACTION FROM THE PRESIDENT:

President Trump told reporters that he did not watch Mulvaney’s press briefing but that he has “a lot of confidence” in his acting chief of staff.

Then during his campaign rally, Trump railed on former Vice President Joe Biden and his son Hunter Biden. “Look at the terrible foreign corruption of the Bidens. I hate to talk about him. You know why? I don’t think he’s got a chance,” Trump told the crowd. http://bit.ly/2OWQuPd

“I think Mr. Mulvaney’s acknowledgment means that things have gone from very, very bad to much, much worse.” Schiff also said: “The idea that vital military systems would be withheld for such a patently political reason, for the reason of serving the president’s reelection campaign, is a phenomenal breach of the president’s duty to defend our national security.” http://bit.ly/31rISHl

During an interview on Fox News, outgoing Energy Secretary Rick Perry said there was no quid pro quo in his dealings with Ukraine. http://bit.ly/2pBelcw

In Perry’s words: “There was no quid pro quo in the sense of what those folks out there would like for it to be,” Perry told Fox’s Bill Hemmer. “That we’re [not] going to give you this money unless you investigate Joe Biden and his son. I never heard that said, anywhere, anytime, in any conversation.”

President Trump‘s job approval dropped by 2 points, according to a new Gallup poll. The numbers: His approval is down to 40.7 percent in his 11th quarter in office from 42.7 percent in the 10th quarter. http://bit.ly/2IXesGr

Happy Friday! It’s actually feeling like fall. I’m Cate Martel with a quick recap of the morning and what’s coming up. Send comments, story ideas and events for our radar to cmartel@thehill.com — and follow along on Twitter @CateMartel and Facebook.

Trump tweeted: “Just spoke to President @RTErdogan of Turkey. He told me there was minor sniper and mortar fire that was quickly eliminated. He very much wants the ceasefire, or pause, to work. Likewise, the Kurds want it, and the ultimate solution, to happen.”

Keep in mind: “It’s unclear what Trump was referring to by ‘the ultimate solution,’ but critics of the deal the U.S. brokered with Turkey have noted that Kurdish fighters are being forced to vacate land in northern Syria over the next few days or face additional bloodshed, and that the Trump administration did not appear to extract any significant concessions from Turkey.”

If you watch one thing today — what do General Mattis and Meryl Streep have in common?:

Mattis said at the Al Smith Memorial Foundation dinner: “I’m not just an overrated general. I’m the greatest, the world’s most overrated …  I’m honored to be considered that by Donald Trump because he also called Meryl Streep an overrated actress. So I guess I’m the Meryl Streep of generals, and frankly that sounds pretty good to me.”

Ouch: “I earned my spurs on the battlefield; Donald Trump earned his spurs from the doctor,” Mattis also said.

An impeachment trial is looking all but inevitable:

Via The Hill’s Jordain Carney, “Republicans are bracing for a high-stakes impeachment fight as soon as next month as a trial in the Senate looks all but inevitable.”  http://bit.ly/2VVjTLq

How Republicans are preparing: “Republicans are already studying up on the rules as they prepare for what will be a high-profile, politically charged showdown even as Trump is widely expected to avoid being convicted and removed from office by the Senate, an act that would require the approval of two-thirds of the closely divided chamber.”

Via WAMU’s Mary Tyler March, Bei Bei, the panda at the National Zoo, is moving to China on Nov. 19. http://bit.ly/32nApGh

Why: “[A]s part of the zoo’s agreement with the China Wildlife Conservation Association.”

How to say good bye to Bei Bei: The zoo is hosting a weeklong celebration. Here’s the schedule: https://s.si.edu/2puOljc

All right, we are done here. See yourselves out.:

I’m nervous to ask this because it may impact our friendship, but would any of you try this?  Let me know.

Spotted at the Capitol:

Is Law and Order filming in the Capitol today? Cause Sam Waterston just walked by pic.twitter.com/YdX0eJVRzs

The House was in this morning. The Senate is out.

That’s a lot of pink:

You can rent Barbie’s Malibu Dreamhouse on Airbnb. Photos and details: https://cnn.it/31nuu2N

Via The Washington Post’s “Going Out Guide,” here’s a list of 16 things to do in the Washington, D.C., area this weekend: https://wapo.st/31ryv6f

And to get your weekend off to a proper start, here’s a festive dog with incredible patience: http://bit.ly/2BlLdsr

The Easter Bunny costume may be my favorite…