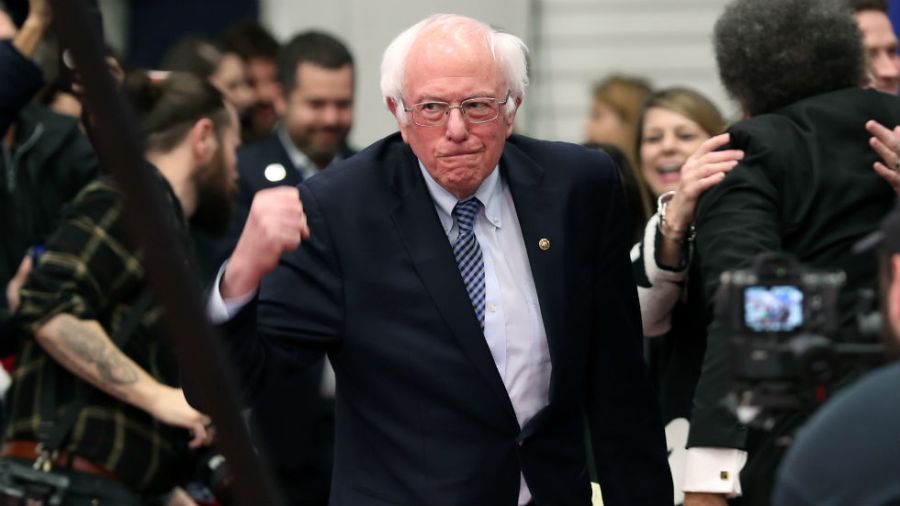 Was this surprising?: Not really. Sanders had been leading in New Hampshire polls in the leadup to the primary, but political watchers were eager to see how the other candidates competed.

Keep in mind about Sanders’s victory: “Though Sanders was the winner in New Hampshire, he once again did not run away with the victory, and Democrats now face the prospect of a long and dragged-out primary that some speculate could end in a contested convention if no one gets a majority of delegates.”

The story is also about former South Bend, Ind., Mayor Pete Buttigieg: “Buttigieg, like Sanders, has had two strong finishes in a row, boosting a candidate who was a political unknown less than a year ago. The challenge for the former mayor going forward will be proving he can win over black and Hispanic voters.”

Breakdown from The Hill’s Jonathan Easley in Manchester, Julia Manchester in Nashua and me from Concord: http://bit.ly/2wc1P6T

*with 89 percent of precincts reporting

Failing to gain traction in the presidential race for the Democratic nomination, Former Massachusetts Gov. Deval Patrick (D) just announced that he is suspending his campaign. http://bit.ly/2uxel0m

Patrick wrote in an email to supporters on why he thinks he did poorly: “Many in the media have noted that I entered the race ‘late.’ As a direct and limiting consequence, I’ve met many people on the campaign trail who lament how they wished I had entered the race sooner.”

Michael Bloomberg is finally opening a New Hampshire office … the day after the primary: Via The Wall Street Journal’s Tarini Parti, “As Democratic presidential campaigns shut down their operations in the Granite State, former New York City Mayor Michael Bloomberg is opening a new office here and hiring nearly a dozen staffers as part of his general election efforts against President Trump.” https://on.wsj.com/31Ojn4B

It’s Wednesday! Filing from downtown Manchester where national media and politicos are starting to clear out, I’m Cate Martel with a quick recap of the morning and what’s coming up. Send comments, story ideas and events for our radar to cmartel@thehill.com — and follow along on Twitter @CateMartel and Facebook.

1. Sanders is the front-runner.

2. Debates matter: Klobuchar wasn’t even on the radar last week.

3. The centrists are cannibalizing one another: This is pretty interesting: “Buttigieg, Klobuchar and Biden combined for more than 50 percent of the vote on Tuesday night, compared with about 36 percent for Sanders and Warren, the two candidates associated with the party’s left wing.”

4. Biden and Warren had terrible nights: Neither received double-digit support and neither are taking away any delegates.

5. Democrats brace for drawn-out primary: No candidate has broken away from the pack. “It could be a long and bumpy ride.”

Context and details from The Hill’s Jonathan Easley: http://bit.ly/2UKVvgU

Tidbit about the turnout: “New Hampshire Democratic turnout has now surpassed 2016, and may beat the 2008 record.” (From Jon Favreau) http://bit.ly/2SiQCdg

The winners of the night: Sanders, Buttigieg, Klobuchar, Bloomberg and the state of New Hampshire.

Reasoning for each, via The Hill’s Niall Stanage: http://bit.ly/2w3yfjJ

ANOTHER ONE BITES THE DUST:

^ Another one bites the dust: Yang dropped out of the presidential race last night. http://bit.ly/38hlmkm

^ And another one gone: Sen. Michael Bennet (D-Colo.) also dropped out of the presidential race last night. https://nyti.ms/2Sik4A1

^ Another one gone, another one bites the dust: Patrick dropped out of the presidential race this morning. http://bit.ly/2uxel0m

SIGHTS AND SOUNDS FROM NEW HAMPSHIRE

A small tidbit that says a lot: Sanders began his election night remarks before Buttigieg finished.

^ And at the Bernie watch party: Sanders supporters chanted “Wall Street Pete” as Buttigieg came on the big screen. (Via The Hill’s Jonathan Easley) http://bit.ly/31MBU1e

Meanwhile at the Pete party: Here is video of the crowd, from The Hill’s Julia Manchester. That energy! I would put this in the “pep rally” category of election night watch parties. Watch: http://bit.ly/2HgzyhF

Not where I expected to be on the night of the New Hampshire primary pic.twitter.com/Vl7wKLqqrO

The theme of the Pete election night party — flags. Lots of flags.: Here’s a photo. http://bit.ly/39r2rno

The Buttigieg press was kept in another room at the watch party; Here is what it looked like. Photo: http://bit.ly/3bwephs

^ But there was a very nice woman there: “Shoutout to the woman handing out chocolate and mints to the print media at Buttigieg’s election night event” (Via The Hill’s Julia Manchester) http://bit.ly/2SmGdwY

I hope Bailey the dog wasn’t too sad last night :/

I laugh every time I zoom in on this photo:

Bernie is straight cheesing in this @NPR stock photohttps://t.co/ePkSIZr0SP pic.twitter.com/CidYAdq1rr

SIGHTS AND SOUNDS FROM MY SPOT AT THE KLOBUCHAR PARTY:

CONCORD, N.H. — In my experience, election night watch parties can either feel like a pep rally, a funeral wake, an awkward networking event or a cocktail party. Klobuchar’s primary watch party was DEFINITELY the latter.

For most of the night, cocktails were flowing, pop music was playing and people were mingling with tiny plates of charcuterie — the spread was pretty nice, I might add. The party had two television screens broadcasting CNN, but the campaign kept the sound muted until later in the night.

Every once in a while, a supporter would look up at the television, see a live shot of the Klobuchar’s party and begin cheering at the camera.

Because I would never mention appetizers without showing them to you: Here’s a photo of the food and drinks: http://bit.ly/2Hi3tpM

The TV situation: One of the TVs kept cutting out. Watch: http://bit.ly/37oxj6y

How we knew Klobuchar was getting ready to give remarks: A campaign staffer started handing out American flags to the crowd. Photo: http://bit.ly/38h0cmt

I saw a green cast at the Klobuchar watch party. Obviously, I had to ask:

I needed to know — and the answer is yes, she did pick a green cast for @AmyKlobuchar! Klobuchar signed it for her. #NHPolitics pic.twitter.com/u3FOUe5itA

^And it gets better: Shoshana Foster, from Nashua, N.H., had surgery on her other foot last summer. Klobuchar also signed that cast, but with a longer message. Photos of Klobuchar signing her other cast: http://bit.ly/2HfpjtR

The press area was just as big as a party: http://bit.ly/2HiaJ4V

Klobuchar was riding a high last night: “While there are still ballots to count, we have beaten the odds every step of the way,” Klobuchar told the crowd with a big smile on her face at her campaign’s election night party in Concord. “Because of you, we are taking this campaign to Nevada,” she added.

My breakdown of her remarks — why her third-place finish felt like a win for Team Klobuchar: http://bit.ly/3bvpcIE

Donald Trump is stirring the pot:

Trump tweeted: “Congratulations to Attorney General Bill Barr for taking charge of a case that was totally out of control and perhaps should not have even been brought. Evidence now clearly shows that the Mueller Scam was improperly brought & tainted. Even Bob Mueller lied to Congress!” http://bit.ly/37k80CO

Timing: “The message came one day after leaders at the Department of Justice reduced the prison recommendation for Stone after career federal prosecutors handling his case had recommended he serve between seven and nine years in jail for lying to Congress and witness tampering.” More context from The Hill’s Morgan Chalfant: http://bit.ly/2vphX4s

Whoa, this is very cool:

SOUND ON: What sound is made when you drop a nine-inch ice core—a sample of ice drilled from a glacier—down a 450-foot deep hole in Antarctica? Turns out it’s something like a series of cartoon ricochets! https://t.co/Zd75da8uvn pic.twitter.com/dPE0jYBTex

The House and Senate are in. President Trump and Vice President Pence are in Washington, D.C.

Feb. 26: The Hill is hosting an event, “America’s Opioid Epidemic: Lessons Learned & A Way Forward” in Washington, D.C. Details and how to RSVP: http://bit.ly/2SAIQKF

Today is National Plum Pudding Day. Sure, why not?

And because you made it this far, here’s a baby trying ice cream for the first time. Same, kid. SAME.: http://bit.ly/2SkvjYB