The Hill’s 12:30 Report: Focus shifts to next stimulus package 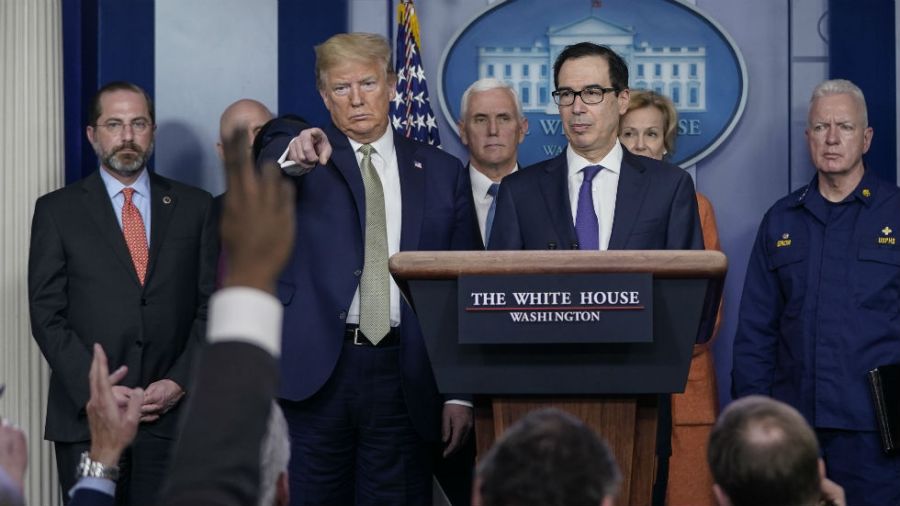 In an interview this morning on Fox Business, Treasury Secretary Steven Mnuchin said Americans could receive two $1,000 checks from the government within nine weeks. http://bit.ly/2U0BRfU

In Mnuchin’s words: This is an unprecedented situation, where for good reason the government has instructed major parts of the economy to close down so that we can win this fight against this virus …  While we’re doing that, we understand there are impacts on hard-working Americans, and the president is determined to support them.”

Mnuchin also said: “As soon as Congress passes this we’d get this out in three weeks, and then six weeks later, if the president still has a national emergency, we’ll deliver another $3,000.”

UPDATES FROM THE WHITE HOUSE THIS MORNING:

It’s Thursday — today is the first day of spring! I’m Cate Martel with a quick recap of the morning and what’s coming up. Send comments, story ideas and events for our radar to cmartel@thehill.com — and follow along on Twitter @CateMartel and Facebook.

No new coronavirus cases today in China: Via CNN, “China has reported no new locally transmitted coronavirus cases for the first time since the pandemic began, marking a major turning point in the global battle to contain Covid-19.” https://cnn.it/3b5g7Fi

The U.S. is preparing to buy 30 million barrels of oil: “The Department of Energy (DOE) announced Thursday it would conduct the sales to fill the Strategic Petroleum Reserve (SPR), fulfilling a pledge by President Trump to offer assistance to the oil industry as prices plummet with the twin threats of the coronavirus and a trade war between Saudi Arabia and Russia.” http://bit.ly/2UjE2KH

Via The Hill’s Sylvan Lane, “the number of Americans who applied for unemployment benefits soared last week as businesses shuttered because of the coronavirus pandemic began laying off workers.” http://bit.ly/2Ujd6L5

Raise your hand if you forgot Tulsi Gabbard was still running:

Rep. Tulsi Gabbard (D-Hawaii) dropped out of the race for the Democratic presidential nomination this morning. http://bit.ly/3dc5kLB

Did she endorse?: Yes, she announced that she is supporting former Vice President Joe Biden.

In her words: “I’m suspending my presidential campaign and offering my full support to Vice President Joe Biden.”

Was this surprising?: No. Her campaign failed to gain traction and was overshadowed by Biden and Sen. Bernie Sanders (I-Vt.).

As a quick reminder: “The bipartisan bill, which is the product of days of negotiations last week between Treasury Secretary Steven Mnuchin and House Speaker Nancy Pelosi (D-Calif.), is the second such legislative package passed by Congress to address the COVID-19 outbreak.”

Via The Hill’s Olivia Beavers, “President Trump is blaming China for the coronavirus pandemic threatening lives and the economy in the United States, further testing a relationship with Beijing already stressed by a trade war.” http://bit.ly/393yadM

For example: President Trump began his press briefing yesterday by calling it a “Chinese virus.”

What this means for the U.S.-China relationship: http://bit.ly/393yadM

IF THIS PANDEMIC HAS SHOWN US ANYTHING, IT’S THAT TRUMP ISN’T CHANGING HIS COMMUNICATION STYLE:

Via The Hill’s Niall Stanage, “On Wednesday morning, as the U.S. death toll from the coronavirus surpassed 100, Trump blasted ‘Sleepy Joe Biden’ on Twitter, accused the Democratic National Committee of seeking to hobble Biden’s main rival, Sen. Bernie Sanders (I-Vt.), and complained yet again that the ‘Fake News’ media was out to get him.” http://bit.ly/393idUI

And then: “Later, at a White House press briefing, Trump defended his use of the term ‘Chinese Virus’ to refer to the coronavirus, despite criticism from some quarters that the term is racist.”

Who would get the direct payments?:

Senate Republicans are considering setting a limit on who can receive direct payments for a coronavirus stimulus. http://bit.ly/3a3M7cN

Where that threshold came from — 2008: “Republican senators say they want to model direct payments on the stimulus checks former President George W. Bush sent out in 2008 during the financial crisis. Twelve years ago, the rebates were reduced for individual incomes above $75,000 and joint incomes above $150,000.”

Pelosi wants Trump to use his war powers:

This morning, Speaker Pelosi called on President Trump to use the emergency war powers that he invoked yesterday. http://bit.ly/2Qt360E

Why: To accelerate production of medical supplies.

Back story: “Trump on Wednesday had invoked the 1950 Defense Production Act — an exceedingly rare step for a president — which empowers the government to mobilize private industry to ramp up production in the name of national security … Yet in a subsequent tweet Wednesday evening, Trump suggested that while he’s invoked the Defense Production Act, he has no immediate plans to use it.”

I will keep finding ways to make you smile. I promise!

Bostonians sang “Sweet Caroline” out their windows: The video is great. Watch: https://ihr.fm/2WD5rdp

I love this!: Some people have started putting their Christmas lights back up to cheer people up. http://bit.ly/2J2TAgk

Does anyone who is homeschooling their kids this week agree?: Television producer Shonda Rhimes tweeted, “Been homeschooling a 6-year old and 8-year old for one hour and 11 minutes. Teachers deserve to make a billion dollars a year.  Or a week.” This tweet has more than 600,000 likes so far. http://bit.ly/2wkBML6

In your free time — you can watch Broadway musicals and plays online for free: Here’s how: http://bit.ly/33zBWdU

This teacher is the MVP — Omg, this is incredible.

You must watch past the first minute. Trust me.

Safe to say that @UARKLaw Professor @grantalexnunn, “Criminal Procedure–Class 16,” is an early favorite for Best Recorded Lecture 2020. Check out the trailer (i.e., the first two mins) of the lecture to see why. pic.twitter.com/fWvUer1oGO

This video has 2.6 million views so far.

When you didn’t prep because prepping is for the paranoid. pic.twitter.com/mO9SaVG5pq

The Senate is in. The House is out. President Trump and Vice President Pence are in Washington, D.C.

I just thought you should know…:

The “Friends” reunion will be delayed because of the coronavirus. Why: It was set to be filmed on March 23 and 24. http://bit.ly/2Wq0pR5

And to brighten your day of social distancing, here’s a baby snuggling with a goldendoodle. Who needs teddy bears when you have this dog?: http://bit.ly/2wdro82