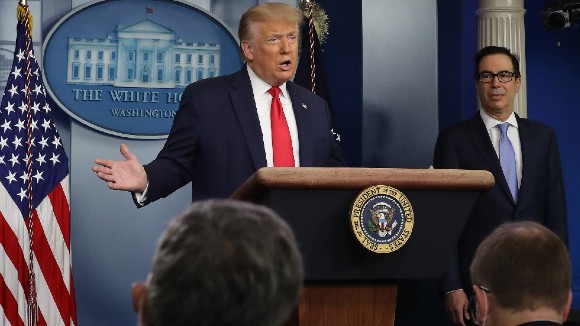 President Trump held a last-minute news conference this morning after the announcement of a strong jobs report.

Trump on the outbreak: “The crisis is being handled.” https://bit.ly/2VG7zj8

On handling the coronavirus: “It’s like life — if you don’t have confidence, you’re not going to do very well.” https://bit.ly/2BvZ7fs

He also added: “We’re putting out flames and fires, and it’s working out very well.” https://bit.ly/3glupEI

On the economy: “You’re going to have a fantastic third quarter; it’ll be a third quarter the likes of which nobody has ever seen before, in my opinion.” https://bit.ly/2VBJTw3

Trump did not take any questions at the press conference: https://bit.ly/2BwdaBF

Stocks jumped after the news of the strong June jobs report. https://bit.ly/2Zyu5vc

“President Trump on Wednesday endorsed mask-wearing in order to prevent the spread of the novel coronavirus, saying he is ‘all for masks’ despite resisting wearing one in public himself.” https://bit.ly/2Zyp59U

Trump told Fox Business: “I’m all for masks. I think masks are good.” Trump also said he would wear a mask: If he were in a “tight situation” with people.

Trump on why he doesn’t wear face masks: He said it’s because the people he sees are first tested for COVID-19.

It’s Thursday — it’s almost the Fourth of July weekend! I’m Cate Martel with a quick recap of the morning and what’s coming up. Send comments, story ideas and events for our radar to cmartel@thehill.com — and follow along on Twitter @CateMartel and Facebook.

PROGRAMMING NOTE: The Hill’s 12:30 Report will not publish tomorrow for the holiday. Have a safe, fun Fourth of July — and eat a s’more for me! 😉 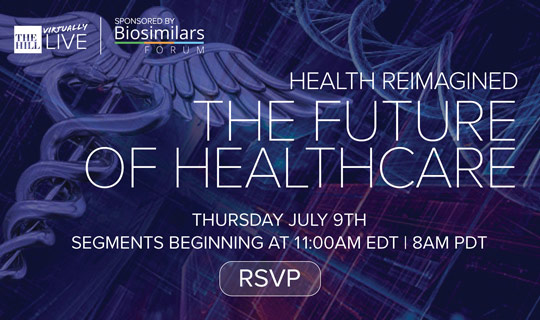 We will be bringing thoughtful leaders from across the public and private sector together to talk about lessons from the pandemic, medical breakthroughs, treatments and cures, and eliminating racial disparities. Dr. Anthony Fauci, Rep. Lauren Underwood, Dr. Patrice Harris, and more join Editor-at-Large Steve Clemons. Register Now!

The U.S. economy added 4.8 million (!) jobs in June, according to data from the U.S. Labor Department. https://bit.ly/2NOrNCP

The unemployment rate: It fell to 11.1 percent, down from an astronomical 15 percent in April.

For context: Economists had predicted a jobs gain of 1 to 3 million.

“She was taken into custody … and she’s expected to be charged with allegedly conspiring with Epstein to sexually abuse minors.”

Keep in mind about Maxwell: “Multiple young women have accused Maxwell, 58, the youngest daughter of the late British publishing magnate Robert Maxwell, of complicity in Epstein’s alleged sex trafficking ring. They say she either recruited them directly or provided logistical support, like scheduling visits to Epstein’s home.”

GETTING TRACTION — ‘HOW WE BOTCHED THE REOPENING’:

Via Politico’s Joanne Kenen, “America’s told-you-so moment: How we botched the reopening. The resurgence of COVID-19 was preventable, but the country’s rush to end shutdowns triggered disaster.” https://politi.co/2VDcEsm

It won’t be just the dogs who are having severe anxiety about the Fourth this year:

Via The Hill’s Jessie Hellmann, experts are worried about the spread of COVID-19 as people gather for the Fourth of July weekend. https://bit.ly/3eUbHU1

“Memorial Day weekend — when people flocked to beaches, pools, parties, restaurants and bars after a weeks-long lockdown — helped spur many of the outbreaks the U.S. is seeing across parts of the country. But now the stakes are even higher.”

Where we stand: “The U.S. is averaging 40,000 new cases a day, exceeding the numbers seen in May. This is partially because of increased testing, but the percentage of tests coming back positive is also going up, an indicator of a growing outbreak.”

How this could play out: https://bit.ly/3eUbHU1

The highest number of coronavirus infections in a day:

The U.S. reported more than 50,000 confirmed coronavirus cases yesterday, the highest number of cases reported in a single day. https://bit.ly/2YR9l2M 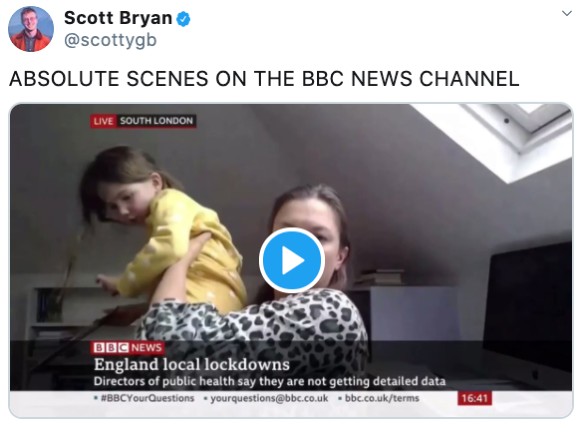 The House is out. The Senate is in. President Trump is in Washington, D.C. Vice President Pence is on his way to Tampa, Fla. for the afternoon.

11:30 a.m. EDT: President Trump spoke at the Spirit of America Showcase in the Grand Foyer of the White House. Livestream: https://bit.ly/31AI3Q4

How to have a fun holiday weekend during this weird, WEIRD year:

Via The New York Times’s Sara Aridi, “This year, Fourth of July revelers will have to swap many traditions — peppy parades, large family reunions and patriotic concerts — with low-key celebrations. But there are plenty of safe ways to commemorate America’s birthday. Here are some suggestions.” https://nyti.ms/2Zyy5vI

And to get your holiday weekend off to a good start, here’s an affectionate puppy: https://bit.ly/2ZzFr26