The Hill’s 12:30 Report: Biden, Harris’s first day as running mates | About to deliver first remarks | How Biden decided on Harris | Sights and sounds from the announcement | Throwback to Harris’s 2012 convention speech | Obama: ‘ Biden nailed this decision | Trump: ‘She was my No. 1 draft pick’ 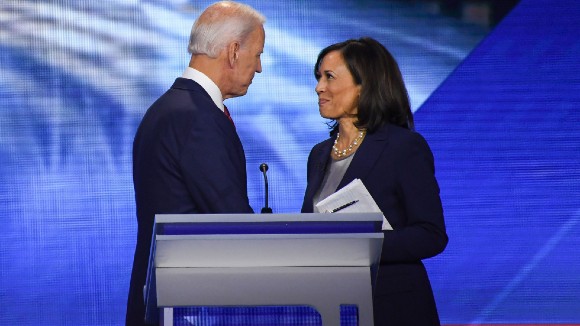 Via The Hill’s Amie Parnes and Jonathan Easley, here’s how Biden decided on Harris:

“When former Vice President Joe Biden began thinking of potential running mates this spring, one of the first people to come to mind was Sen. Kamala Harris (D-Calif.).”

“She was a friend to his late son Beau Biden, former top prosecutor for the state of California and the kind of fighter needed in a campaign against President Trump. On top of all that, she already had been through the slugfest of a presidential primary campaign, which included several direct confrontations with Biden himself.”

New — This video begins and ends with clips of Biden asking her over video chat: 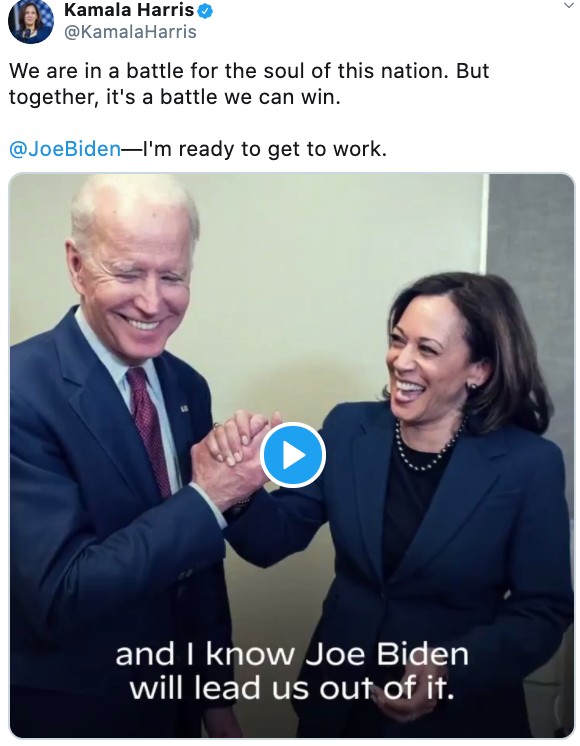 Presumptive Democratic presidential nominee Biden and running mate Harris are speaking in Wilmington, Del., together for the first time since the announcement. Livestream: https://bit.ly/3amGmrY

It’s Wednesday. I’m Cate Martel with a quick recap of the morning and what’s coming up. Send comments, story ideas and events for our radar to cmartel@thehill.com — and follow along on Twitter @CateMartel and  Facebook.

PROGRAMMING NOTE: The 12:30 Report will not publish tomorrow or Friday. Enjoy the weekend! Monday. Same time, same place. Be there. 😉

RSVP today for our Breaking Through virtual event 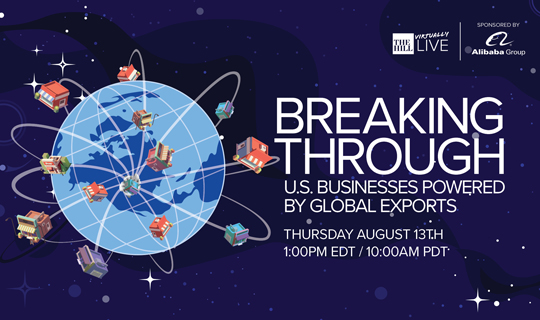 On Thursday, August 13, The Hill Virtually Live hosts a virtual event, Breaking Through: U.S. Businesses Powered By Global Exports. Global trade is messier today than years ago – a pandemic is creating unforeseen challenges, sanctions are back, and the WTO is wobbly. But global trade is still thriving in many sectors. While nations may be squabbling, businesses are finding ways to deliver their products to consumers. Rep. Rick Larsen, former Commerce Secretary Carlos Gutierrez and more join The Hill’s Steve Clemons.

Explanations for each from The Hill’s Niall Stanage: https://bit.ly/2PM8zis

Who could fill Harris’s Senate seat if Biden wins: Here’s the shortlist, via The Hill’s Cristina Marcos and Alexander Bolton: https://bit.ly/33TuGeW

The New York Times’s Jonathan Martin weighs in: “what most Dems won’t say out loud: the nature of a corona campaign makes life w this ticket w lot easier.  both biden and kamala will largely get to avoid the spontaneity at events & in gaggles that has gotten them in trouble in the past” https://bit.ly/3fSs833

I respect a pun more than anyone: 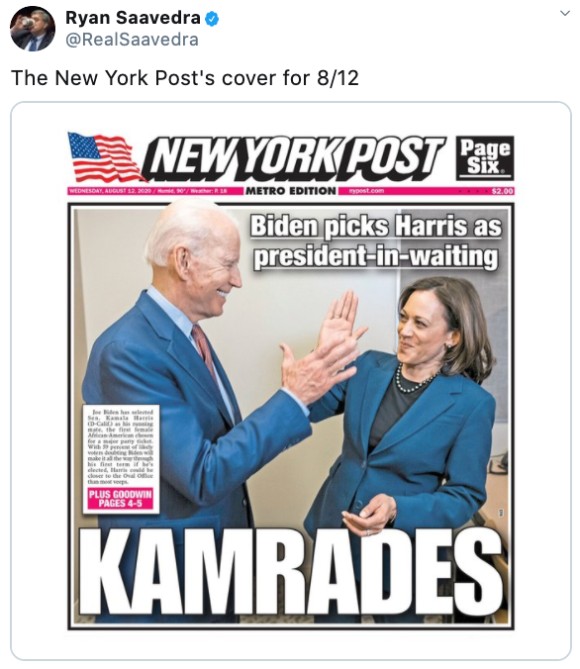 Wow, check out this visual representation of tweets about the Harris announcement: https://bit.ly/3agKMAx

Harris spoke at the Democratic National Convention in 2012: Here’s a clip from her speech: https://bit.ly/2XPfmfu 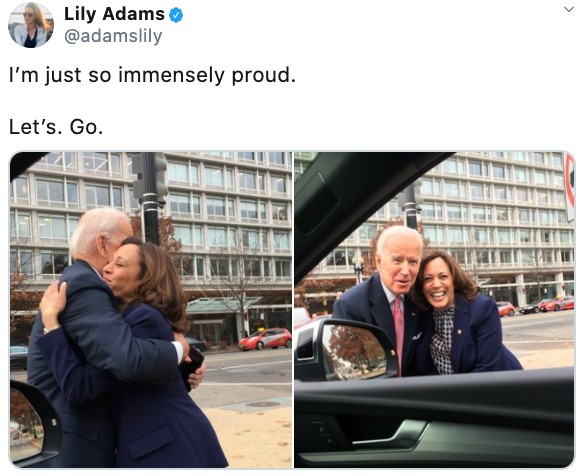 ^Here’s the article from the time: http://bit.ly/2NkUPwH 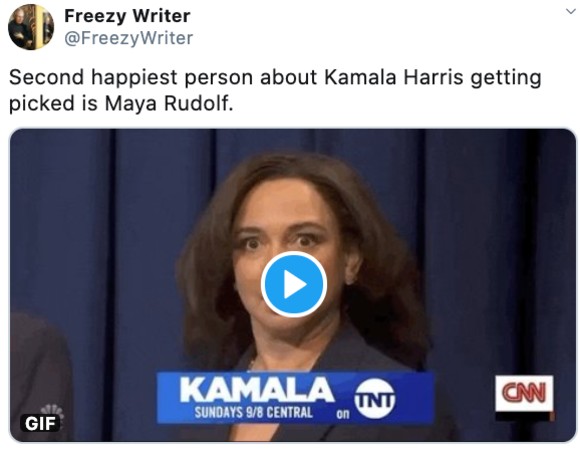 From President Trump: “She was my No. 1 pick. I mean, she was … my No. 1 draft pick, and we’ll see how she works out. She did very, very poorly in the primaries, as you know. She was expected to do well. And she ended up right around 2 percent and spent a lot of money. She had a lot of things happening. So I was a little surprised he picked her.” Trump’s full comments on Harris: https://bit.ly/3kHclb8

From White House chief of staff Mark Meadows: “Birds of a feather flock together. Two career politicians with zero accomplishments, love for the DC Swamp, and an entire campaign of running as far and fast to the political left as they can. Americans will reject this. @realDonaldTrump has delivered. He’ll do it again.” https://bit.ly/3iD31mJ

It ain’t over yet! Mikeald! Trence! Prump!:

^Hey, I never said I was skilled at writing campaign slogans 😉

Via The Hill’s Alexander Bolton, “President Trump’s pledge to ‘terminate’ the payroll tax that funds Social Security defies the conventional wisdom of staying away from what’s known as the ‘third rail’ of politics.” https://bit.ly/3gQkCqT

“Proposing a major reform to Social Security shortly before an election traditionally has been seen as the political equivalent of touching the highly electrified rail that powers subway cars.”

New polling on the $600 a week unemployment benefit:

More than half of voters in four Senate swing states are in favor of extending the expanded unemployment insurance, according to new polling from the Justice Collaborative and Data for Progress.

The numbers: 63 percent of North Carolina voters polled are in favor of extending expanded unemployment insurance during the pandemic, while 29 percent think the unemployment relief should end; 14 percent are undecided. And in the other three states: 51 percent of Maine voters, 60 percent of Arizona voters and 53 percent of Iowa voters think the benefit should continue.

RSVP today for our Breaking Through virtual event

On Thursday, August 13, The Hill Virtually Live hosts a virtual event, Breaking Through: U.S. Businesses Powered By Global Exports. Global trade is messier today than years ago – a pandemic is creating unforeseen challenges, sanctions are back, and the WTO is wobbly. But global trade is still thriving in many sectors. While nations may be squabbling, businesses are finding ways to deliver their products to consumers. Rep. Rick Larsen, former Commerce Secretary Carlos Gutierrez and more join The Hill’s Steve Clemons. 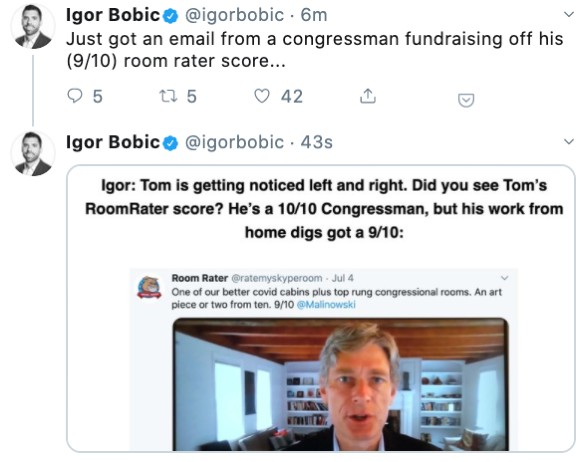 The House is out. The Senate is in. President Trump and Vice President Pence is in Washington, D.C.

And because you made it all the way to the end, here’s a little boy mimicking his favorite animal: https://bit.ly/2PKCbfX