Four test positive from the Republican National Convention in Charlotte: 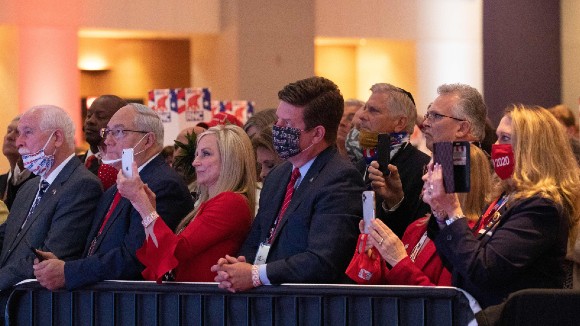 Four people have tested positive for the coronavirus after attending the Republican National Convention in Charlotte, N.C. https://bit.ly/3jqE7a2

Who: Two attendees and two staffers

From Mecklenburg County officials: “These individuals were immediately issued isolation instructions and any known close contacts were notified and issued quarantine instructions.”

The concern: “Charlotte officials had raised concerns over the lack of social distancing measures taken at even the scaled-back convention, where only a few hundred Republicans gathered to formally renominate President Trump and Vice President Pence. Video of the event showed few people wearing masks and many posing close together for photographs. “

Precautions taken: “But Republicans did take precautions, using special badges that logged their movement in case contact tracers needed to alert them about possible infections.”

Keep in mind about the magnitude of the spread so far: About 792 COVID-19 tests have been conducted so far, according to officials, with four positives.

Japanese Prime Minister Shinzo Abe has resigned due to a medical condition. https://cnn.it/2EAqqGP

Details: “Abe suffers from colitis, a non-curable inflammatory bowel disease, which was also a factor in his sudden resignation as prime minister in 2007, ending his first term after just over a year in office. On Monday morning, Abe visited Keio University Hospital in Tokyo for what was his second hospital visit in a week.”

Happy Friday! We have made it through both pandemic-era conventions. I’m Cate Martel with a quick recap of the morning and what’s coming up. Send comments, story ideas and events for our radar to cmartel@thehill.com — and follow along on Twitter @CateMartel and Facebook.

The ‘Get Your Knee Off Our Necks’ March on Washington:

Via WTOP, Thousands are gathering in Washington, D.C., today for the 57th anniversary of the March on Washington to protest police brutality. https://bit.ly/2YHQPcK

Who is speaking: “Speakers will include relatives of [George] Floyd, Breonna Taylor, Eric Garner and others killed by police. Anthony Benjamin Crump, a lawyer who represents many of them, will also address the crowd. Speakers also will include Rep. Sheila Jackson Lee (D-Tex.), Democratic National Committee Chairman Tom Perez, and singers George Clinton, Tyrese and Ne-Yo.”

FROM THE REPUBLICAN NATIONAL CONVENTION

Don’t get me wrong. I love fireworks. But there’s just something about a balloon drop at conventions…:

The theme of President Trump’s nomination acceptance speech last night was to portray Joe Biden “as a purveyor of a liberal agenda that would lead America to ruin.” Quick catchup if you missed Trump’s speech last night: https://bit.ly/3gCHpW6

This photo of the fireworks amid protests is everywhere on social media: https://bit.ly/2YKHSiR

Context and details for each: https://bit.ly/2EICYMh

Ivanka Trump on her father’s tweets: “I recognize that my dad’s communication style is not to everyone’s taste. And I know his Tweets can feel a bit unfiltered. But the results speak for themselves.” https://bit.ly/3lrNS9N

Housing and Urban Development Secretary Ben Carson on race: “President Trump does not dabble in identity politics. He wants everyone to succeed and believes in the adage ‘a rising tide lifts all boats.’ Many on the other side love to incite division by claiming that President Trump is a racist. They could not be more wrong.” https://bit.ly/3b2yTOY

Carson also addressed Kenosha: “Before I begin, I’d like to say that our hearts go out to the Blake family and the other families who have been impacted by the tragic events in Kenosha,” Carson said. https://bit.ly/31An6o3

Tidbit: Ivanka Trump told the crowd that her son Joseph built President Trump a LEGO replica of the White House. Trump has it displayed in the Oval Office.

Comparing Trump’s speech to Biden’s: “Number of times that Joe Biden said the word ‘Trump’ in his convention speech: 0

Number of times that Donald Trump said the word ‘Biden’ in his convention speech text: 41” (via The Washington Post’s Matt Viser) https://bit.ly/3hBEZZb

Walking down these stairs with so many eyeballs — and with those heels (!) — has to be stressful: Photo of President Trump and first lady Melania Trump walking down the stairs: https://bit.ly/34LooyB

Oh man, this is such an awkward moment: I’ve been there, Melania. Here is a video of first lady Melania Trump’s quick facial expression after greeting first daughter Ivanka Trump. This is pretty uncomfortable to watch. 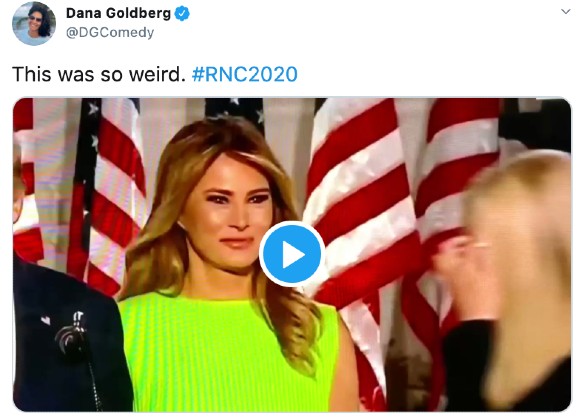 ^The Hill’s Jesse Byrnes captioned the video: “Me when I see someone I know at the grocery store” Lol, well said. https://bit.ly/32A6JXA

“For those wondering why @FLOTUS chose the bright green??” (from CNN’s Kate Bennett) Photo explanation: https://bit.ly/2YDp84D

Wow, that is a lot of people: 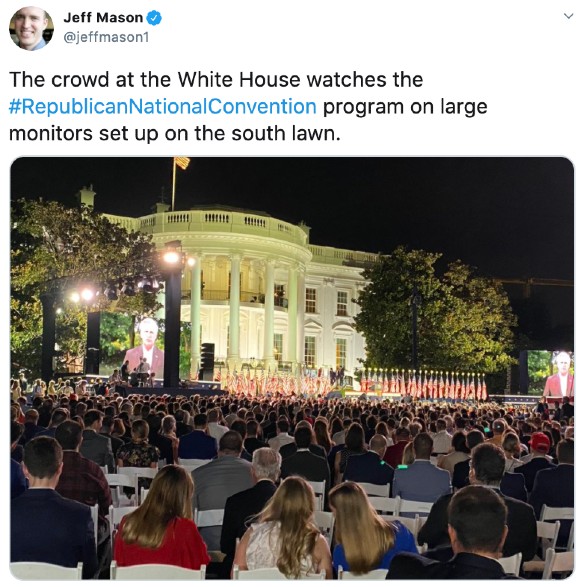 ^ Was everyone COVID-19 tested?: No. Via NBC News, White House chief of staff Mark Meadows said “a number” of guests have been tested but not everyone. Masks were not required, either. https://nbcnews.to/3b1xgku

So, who was tested?: “People in what’s considered ‘close proximity’ to [President Trump] were tested but not several hundred people in audience, who are seated right next to each other.” https://bit.ly/2YDnkZp

Members of Trump’s Cabinet sat in the front row — notice the only person in that group wearing a mask is … wait for it … Health and Human Services Secretary Alex Azar: 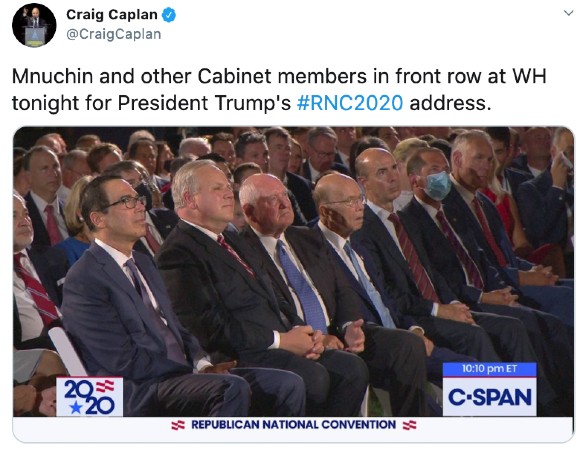 ^From the White House lawn, you can hear the protests: Video: https://bit.ly/3hC0Hw8

The protest looks like a block party: “This is the street party/protest that is on the back part of the @WhiteHouse at 15th and Constitution – lotta loudspeakers & a live band jamming out of this bus.” Watch: https://bit.ly/2EwntXO 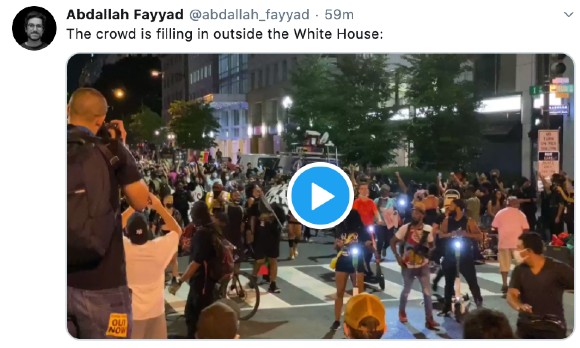 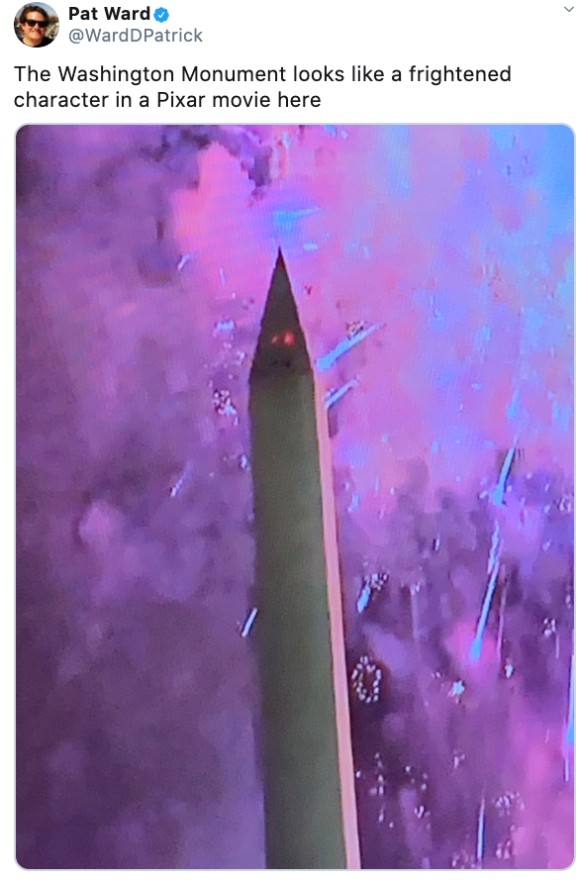 At least six people have died and thousands are without power after Hurricane Laura stormed through Louisiana. https://cnn.it/2EAC1Wn

These aerial view photos are pretty wild: Via The Associated Press, here are overheard photos of the damage from Hurricane Laura: https://bit.ly/34BwUjv

Before and after: The winds shattered the glass of a building in Lake Charles, La. Photo: https://bit.ly/3jnD3nk

WHERE THE STORM IS NOW HEADED:

Via ABC News’s Max Golembo, “Laura is still a tropical depression Friday morning, but is losing its tropical characteristics over Arkansas. However, the storm is still producing heavy rain and with the possibility of tornadoes.”

Today: “What’s left of Laura will move through Mid-Mississippi Valley and into Ohio Valley Friday evening, bringing gusty winds, a flash flooding threat and a threat for a few tornadoes.”

On Saturday: “Laura will combine with a cold front and will bring heavy rain and a threat for flash flooding to the Northeast Saturday from Philadelphia to New York City and into southern New England.” 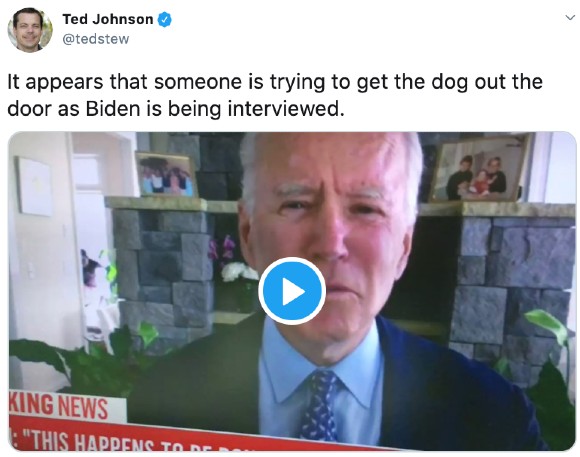 The House and Senate are out. President Trump is in New Hampshire this afternoon and Vice President Pence is in Minnesota and Michigan today.

Get that free Chipotle!:

Chipotle has launched a “Chipotle IQ” test, giving customers free food for a high score. Aha!: “The focus [of the questions] is on Chipotle’s sourcing, ingredients, recipes, and sustainability efforts.” Details from Thrillist:https://bit.ly/3hCiZNV

And to get your weekend off on the right foot, here’s a dog really handling the rain: https://bit.ly/3b0K3Ug