The Hill’s 12:30 Report: First Kennedy to lose a Massachusetts election 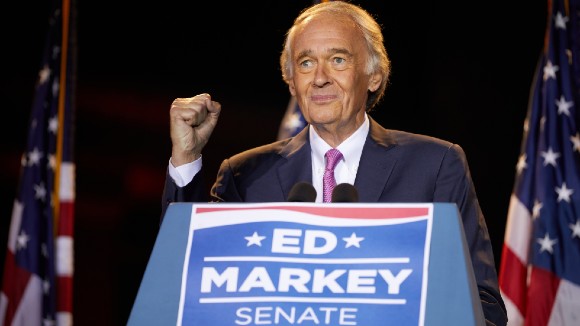 What to know about Markey’s campaign: “The 74-year-old Markey campaigned heavily on his progressive record, particularly regarding environmental issues, citing his co-authorship of the Green New Deal with Rep. Alexandria Ocasio-Cortez (D-N.Y.), who endorsed him over Kennedy. The senator’s campaign slogan read, ‘It’s not your age — it’s the age of your ideas that’s important.’” https://bit.ly/2YXUxim

Why Kennedy’s loss is noteworthy: “It marks a stunning change in fortune for Kennedy, who has been seen as a likely future presidential contender and garnered national attention in 2018 when he delivered the rebuttal to President Trump’s State of the Union address … Additionally, his last name made him a popular commodity in Massachusetts.” https://bit.ly/2YZZEPb

MORE ON HOW ED MARKEY TOOK DOWN A KENNEDY:

Via The Hill’s Julia Manchester: https://bit.ly/2YZZEPb

THIS CAN’T BE A FUN STAT FOR THE FAMILY:

FROM THEIR SPEECHES LAST NIGHT:

Markey told his supporters: “Tonight is more than just a celebration of a movement. It is a real reaffirmation of the need to have a movement, a progressive movement of young people demanding radical change, demanding justice.” Watch Markey’s full victory speech: https://cs.pn/2EPa3Xa

Kennedy told his supporters: “No matter the results tonight, I would do this again with all of you in a heartbeat. We may have lost the final vote tonight, but we have built a coalition that will endure.” Watch Kennedy’s full concession speech: https://cs.pn/32SNw3N 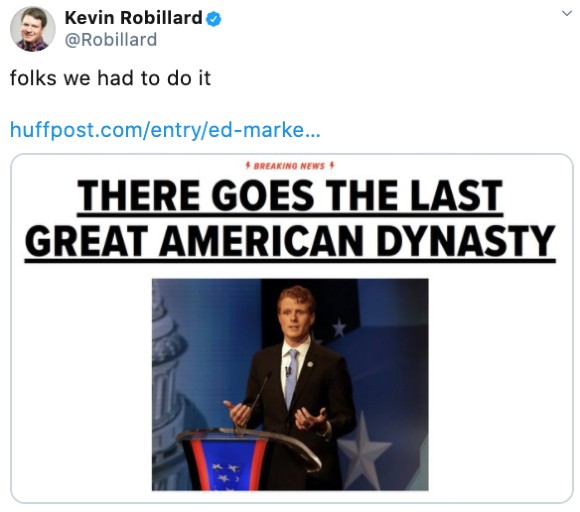 ^For those of you who don’t get the joke, this is one of Taylor Swift’s new songs. If you haven’t heard it, it’s very good!: https://bit.ly/3lGPr3P

TIDBIT — JOE KENNEDY IS NOT THE ONLY KENNEDY RUNNING FOR OFFICE:

“Amy Kennedy, wife of Patrick Kennedy, is running against Jeff Van Drew, in NJ-02.” (Via The Hill’s Julia Manchester) https://bit.ly/34XgOAY

“Rep. Richard Neal (D-Mass.), the chairman of the powerful House Ways and Means Committee, fended off a primary challenge from Holyoke, Mass., Mayor Alex Morse on Tuesday in a blow to progressives who had hoped to unseat the longtime incumbent.” https://bit.ly/3lIyAOo

Breaking — the referees, I mean ‘debate moderators,’ have been set!:

Via The New York Times’s Maggie Haberman, the Commission on Presidential Debates has chosen the moderators for each of the fall presidential debates. https://nyti.ms/3bjTbDK

Just announced — Joe Biden set a record for his fundraising:

Via The Hill’s Max Greenwood, “Joe Biden’s presidential campaign and the Democratic National Committee (DNC) pulled in a combined $364.5 million in August, more than doubling their fundraising from July and signaling a massive fundraising boon for Democrats in the days surrounding their national convention.” https://bit.ly/3bjkQVe

For context: “The staggering total marks the best monthly fundraising sum for Biden and the Democrats to date, and the best month of online fundraising in U.S. political history. Of the $364.5 million raised, $205 million came from online, small-dollar contributions, Biden’s campaign said.”

Read the analysis, published in the Journal of the American Medical Association: https://bit.ly/3jDCzcZ

Sen. Joni Ernst (R-Iowa) said on Monday that she is “so skeptical” about the coronavirus death count. https://bit.ly/2QKnLgk

She told the crowd at an event: “These health-care providers and others are reimbursed at a higher rate if COVID is tied to it, so what do you think they’re doing?”

Election Day could be a mess — here’s a doomsday scenario:

Via The New York Times’s Trip Gabriel, “What if early results in swing states on Nov. 3 show President Trump ahead, and he declares victory before heavily Democratic mail-in votes, which he has falsely linked with fraud, are fully counted?” The full story: https://nyti.ms/3jFgjzG

The numbers: “The survey, conducted by veteran pollster Ann Selzer for Grinnell College, finds Biden leading 49 percent to 41 percent, on the strength of a huge advantage among female voters, suburbanites and Americans with a college degree.” More from the poll: https://bit.ly/3lLcZEG

If you click on one thing in this newsletter, please promise me it will be this:

As the Huffington Post’s Erin E. Evans so eloquently stated, “Look at this patriot speaking truth to power.” https://bit.ly/2Gnjy0d 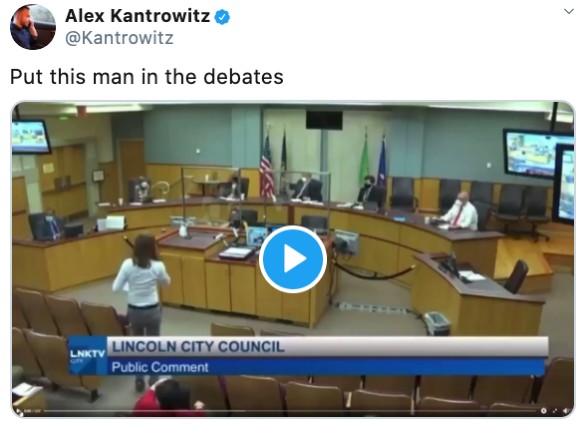 President Trump is in North Carolina this afternoon and Vice President Pence is in Washington, D.C.

11:45 a.m. EDT: President Trump left for Wilmington, N.C. He tweeted this morning: “Will soon be heading to Wilmington, North Carolina, and then will be going to Battleship North Carolina. Look forward to seeing all of my friends!” https://bit.ly/2QOBv9W

Today is National Blueberry Popsicle Day. Sure? Why not?

I feel like I have talked about chicken nuggets a lot lately, but alas…:

Via Thrillist, “Wendy’s is offering a free 10-piece order of chicken nuggets with any purchase through its app.” How long the offer is valid: Through September 27. Details: https://bit.ly/32QnNJ3

Just announced — Hey all you cool cats and kittens, look who’s back!:

“Tiger King” star Carole Baskin will compete on this season’s “Dancing with the Stars.” The full lineup: https://bit.ly/31QkJgJ

And speaking of cool cats and kittens, here are kittens who have taken up wrestling as a competitive sport: https://bit.ly/34XXJyk 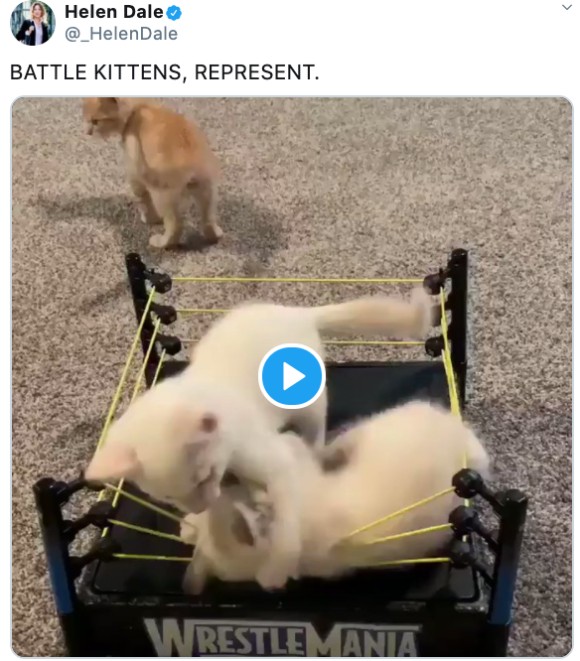