IN THE TRUMP WHITE HOUSE 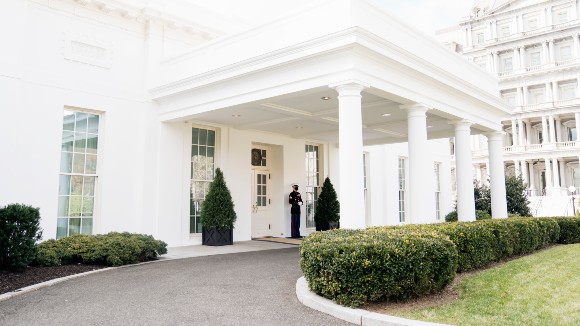 Via The Hill’s Brett Samuels, “President Trump will depart the White House Wednesday after four tumultuous years that will be defined by a mob riot and bipartisan impeachment vote in his final weeks in office.” https://bit.ly/35USD5Q

To put a bookend on his term: “There has been no public victory lap for Trump, whose last days in the White House have instead been defined by silence — in no small part because of a Twitter ban on his favorite form of social media imposed after the riot at the Capitol.”

When Trump is expected to leave DC: 8 a.m. EST tomorrow from Joint Base Andrews. https://bit.ly/3qramJY

“President Trump is preparing to issue dozens of pardons before President-elect Joe Biden is sworn in at noon on Wednesday, with the big question being whether Trump will preemptively pardon himself before he leaves office.” https://bit.ly/39Py2AS

Reportedly on that list: “The rapper Lil Wayne, who has pleaded guilty to possession of an illegal firearm, and former New York Assembly Speaker Sheldon Silver (D), who was found guilty on public corruption charges and is imprisoned in New York”

” ‘We’ve had more access to Donald Trump than any president I’ve covered,’ said Doug Mills, a photographer for The New York Times who has covered every administration since Ronald Reagan‘s.”

“The access has enabled photographers to produce what is possibly the most comprehensive portrait of any presidency. Whereas a photographer might have had a few minutes at the top of a Cabinet meeting in a previous administration, it wasn’t unusual to be in a dimly lit room with Trump and others for nearly two hours. Mills has found that Trump prefers low lighting.”

^ What a cool photo of the president: https://bit.ly/2LMekOz

It’s Tuesday — we are in the last 24 hours of President Trump’s term as president. I’m Cate Martel with a quick recap of the morning and what’s coming up. Send comments, story ideas and events for our radar to cmartel@thehill.com — and follow along on Twitter @CateMartel and Facebook.

Mitch McConnell is pointing his finger directly at Trump:

McConnell just said on the Senate floor: “The last time the Senate convened, we had just reclaimed the Capitol from violent criminals who tried to stop Congress from doing our duty. The mob was fed lies. They were provoked by the president and other powerful people.”

24 hours from now, a new president will be in office:

Via PBS, “The inauguration of Joe Biden as the 46th president of the United States is going to look vastly different than those of his predecessors, given the ongoing coronavirus pandemic and heightened security concerns after a mob of pro-Trump extremists violently breached the U.S. Capitol two weeks ago.” https://n.pr/38VDiDO

What time everything starts: 11 a.m. EST when President-elect Biden arrives at the U.S. Capitol. Biden is sworn in at noon. Here’s the full schedule with timing: https://to.pbs.org/2KshgPF

‘VIEWERS’ GUIDE TO BIDEN’S INAUGURATION DAY: EVERYTHING YOU NEED TO KNOW’:

‘AN INAUGURAL LOCKDOWN COMES AT A PRICE FOR WASHINGTONIANS:

An extra layer of caution:

All 25,000 National Guard members are being vetted by law enforcement ahead of Wednesday’s inauguration. https://cnn.it/39KuIab

Why: To prevent inside threats

Keep in mind — from acting Secretary of Defense Christopher Miller: “While we have no intelligence indicating an insider threat, we are leaving no stone unturned in securing the capital. This type of vetting often takes place by law enforcement for significant security events. However, in this case the scope of military participation is unique.”

SIGHTS AND SOUNDS AROUND THE CITY:

Context to all the security around the Capitol: The Huffington Post’s Matt Fuller tweeted, “I’ve been in the Capitol for two previous Inaugurations, nearly 10 State of the Unions, and a Papal visit. I’ve never seen security here like this.” https://bit.ly/3sFMZhK 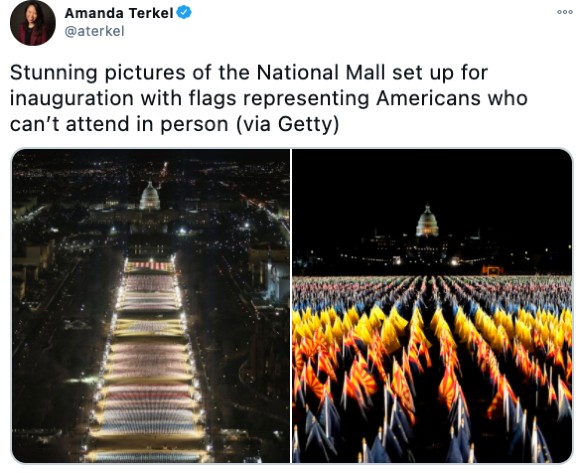 ^What the mall looks like during the day: https://bit.ly/2XUUvqY

NYPD is on its way: “200 NYPD officers board buses heading to DC to assist in security for inauguration. All volunteered.” (Via NY1’s Lindsay Tuchman) Watch: https://bit.ly/36bvn3N

Wow, the Capitol looked like the ‘House of Cards’ intro last night: Check out this shot of the Capitol building last night. Photo: https://bit.ly/39JgYwp

A one-stop shop: “The Senate Visitors Center has everything— Daily Mass for the National Guard Units stationed in the Capitol, Covid testing…” (Via CNN’s DJ Judd) Photos: https://bit.ly/3qFdyBX

The gist of what the city looks like now: Here’s a big group of National Guard members stationed in Logan Circle (Via Al Jazeera English’s Chris Sheridan) Photo: https://bit.ly/3sAHkcG

A few shots of the wild military presence in D.C.: https://bit.ly/3bSnrrD

A military marching band rehearsing over the weekend: Here’s a video: https://bit.ly/3sFPdxq 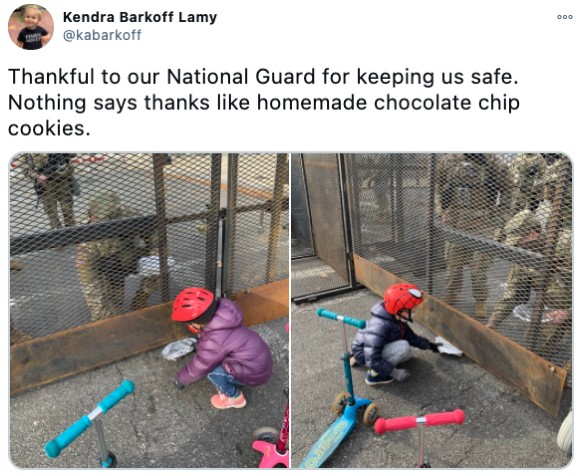 What’s it like inside the security perimeter: CNN’s Donie O’Sullivan tweeted a photo of K Street on Sunday night: https://bit.ly/35TPjYq

IN THE INCOMING BIDEN ADMINISTRATION

Via The Washington Post’s Seung Min Kim, “President-elect Joe Biden will roll out a sweeping overhaul of the nation’s immigration laws the day he is inaugurated, including an eight-year pathway to citizenship for immigrants without legal status and an expansion of refugee admissions, along with an enforcement plan that deploys technology to patrol the border.” Details: https://wapo.st/2M1YYp4

HOW BIDEN IS PREPARING FOR A SEA OF CHALLENGES:

Via The Hill’s Niall Stanage: https://bit.ly/2XUXm3a

New footage of what went on inside the Capitol on 1/6 — this is chilling and sickening:

Luke Mogelson, “a veteran war correspondent and a contributing writer at The New Yorker,” captured footage of rioters storming into the Capitol and plotting once they pushed through law enforcement and reached the floor. 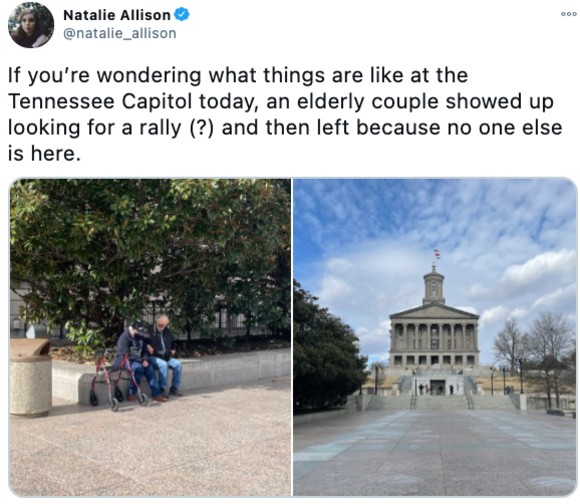 As a resident of DC, we really appreciate you!: 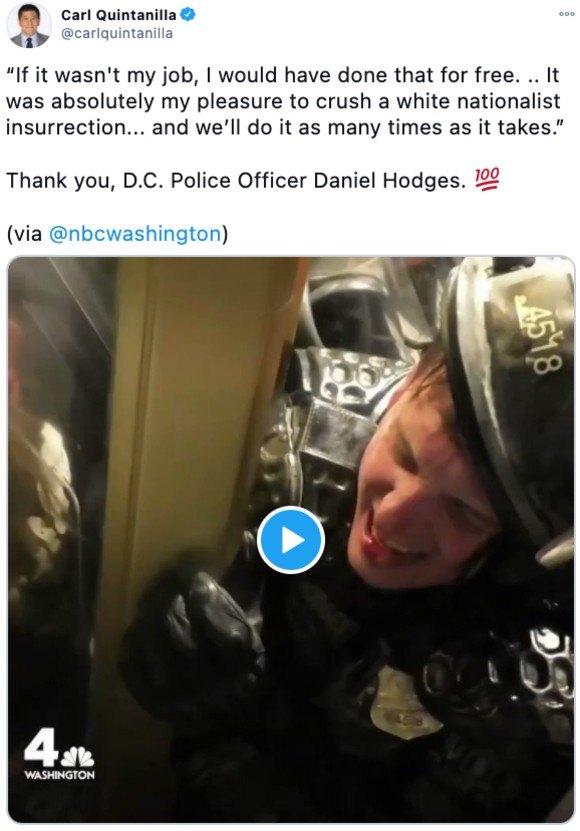 “President Trump will work from early in the morning until late in the evening. He will make many calls and have many meetings.”

2 p.m. EST: A confirmation hearing for Antony Blinken to serve as secretary of State. Livestream: https://bit.ly/2M5BDCE

^Which reminds me of an amazing applicable tweet I saw last week. “Eating popcorn happens in two distinct phases- phase one is eating the kernels one at a time in a civilized manner and phase two is ramming fistfuls of popcorn into your mouth like you’re stuffing a sleeping bag. Nobody knows how or when the transition occurs.” (Via @ronnui_) https://bit.ly/2NiYZWd

An official note regarding a lost tooth: 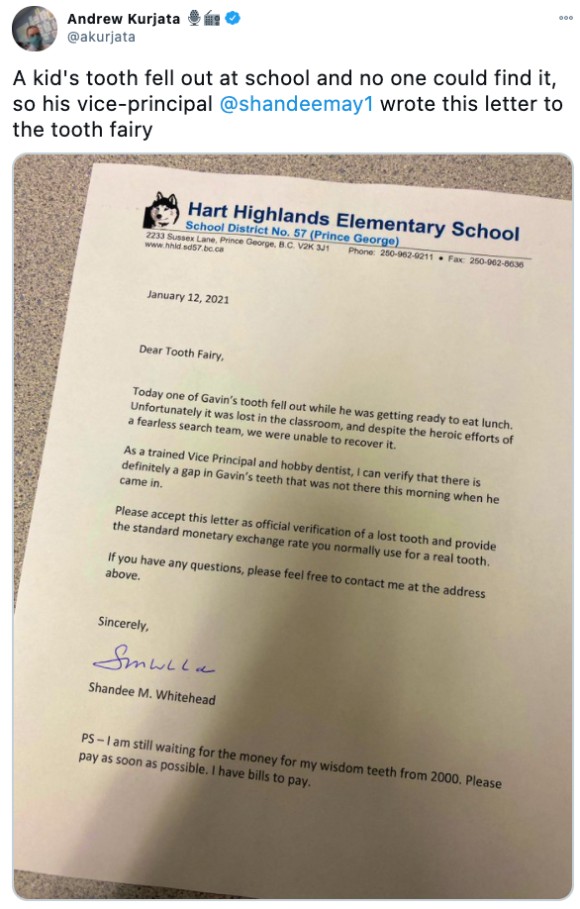 And to make you smile, here’s a dog looking for its squeaky toy. It’s gotta be close, I can just hear it!: https://bit.ly/2XQwJMy