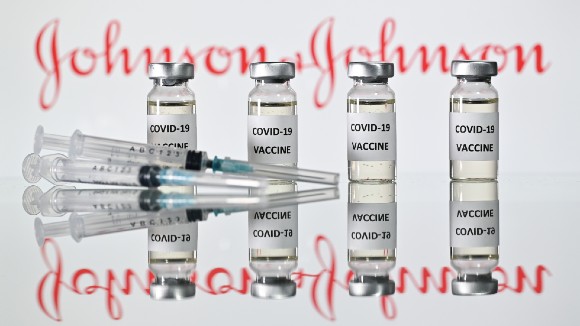 –> A midday take on what’s happening in politics and how to have a sense of humor about it.

Johnson & Johnson’s single-dose coronavirus vaccine is effective at preventing moderate to severe cases of COVID-19, according to data published this morning by the Food and Drug Administration (FDA), in a breakthrough that we all need right now. The data show the vaccine is 85 percent effective at preventing severe cases, and no one involved in the trial who got the shot was hospitalized.

The FDA’s advisory committee will meet Friday to consider whether to authorize the shot for emergency use. J&J has said it has 4 million shots ready to deliver immediately to the U.S., and another 20 million by the end of March.

Our colleague Nate Weixel has the story.

Reading between the lines: Great news as the Biden administration seeks to build vaccine capacity in its first 100 days. Less great news as signs out of South Africa suggest the vaccine is less effective against the emerging strain there. As your author has been saying for months, the light is at the end of the tunnel, but there’s still tunnel to traverse.

It’s Wednesday. I’m Reid Wilson, filling in for Cate, with a quick recap of the morning and what’s coming up. Send comments, story ideas and events for our radar to rwilson@thehill.com — and follow along on Twitter @PoliticsReid.

The Democratic Congressional Campaign Committee this afternoon plans to begin hammering Republican incumbents who accepted money from House Minority Whip Steve Scalise (R-La.) after Scalise refused in a weekend interview with ABC’s Jon Karl to acknowledge that President Biden won the election. It’s part of a broader push to make the midterms about former President Trump’s control over the GOP, and to make leaders like Scalise and Minority Leader Kevin McCarthy as toxic as possible. 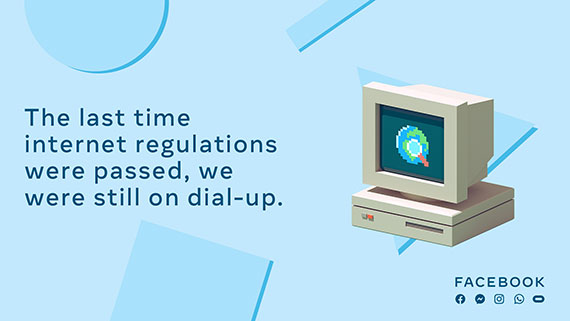 The internet has changed a lot in 25 years. But the last time comprehensive internet regulations were passed was in 1996.

Via The Hill’s Morgan Chalfant, Office of Management and Budget director nominee Neera Tanden’s confirmation is looking increasingly tentative as the few gettable Republican senators begin to come out against her. And that’s before we hear from Budget Committee chairman Sen. Bernie Sanders (I-Vt.), a frequent target of Tanden’s Twitter feed in the past who has yet to say whether he would vote.

The Biden administration is preparing sanctions on Russia to punish Moscow for the SolarWinds hack it will label as potentially “disruptive,” in the words of one senior administration official, the Washington Post reports – which means the administration can say the hack goes beyond typical cyberespionage operations. Expect an attribution statement and other measures meant to convey to Moscow that a new sheriff is in town.

The nine federal agencies that were compromised in the hack include NASA, the Federal Aviation Administration and the Departments of Transportation, State, Justice, Energy, Commerce and Homeland Security, along with the National Institutes of Health. Administration officials say the data that was stolen was unclassified.

President Biden on Wednesday will sign an executive order to improve supply chains for semiconductors – computer chips, in this Luddite’s terms – beginning 100-day reviews of the technology we rely on for computers, large-capacity batteries, pharmaceuticals and rare earth minerals. It’s a big deal for automakers, especially of the electric variety. Its likely conclusion: The U.S. is too reliant on China for some of the technology we need to compete with … China. Read more here. 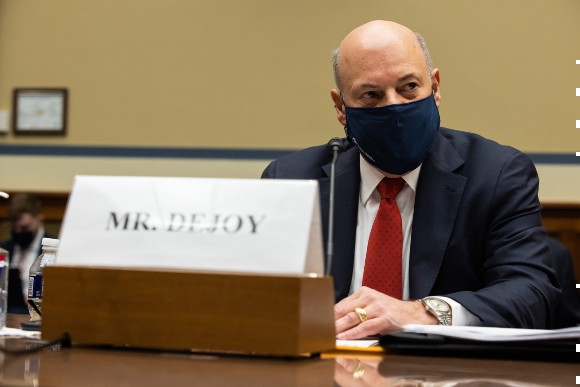 U.S. Postmaster General Louis DeJoy testifies today before the House Oversight and Reform Committee as Congressional Democrats push the Biden administration to oust him from office. Democrats want Biden to fill three vacant seats on the Postal Service’s Board of Governors with allies who could fire DeJoy, a Trump administration holdover. Watch his testimony, sure to be an unpleasant day, here.

Related: Those of us patrolling certain message boards of Capitol Hill residents have noticed a serious uptick in people complaining about mail service in recent weeks. More than a few chiefs of staff and members of Congress live in a neighborhood where mail delivery has been notably spotty – or absent – in the last few weeks.

ON THAT HIGH NOTE…:

Asked whether former President Trump should speak at the Conservative Political Action Conference on Sunday, his first political speech since leaving office, House Minority Leader Kevin McCarthy (R-Calif.) gave a quick “yes, he should” answer today. But, Rep. Liz Cheney (R-Wyo.) had a different take: “I don’t believe that he should be playing a role in the future of the party or the country,” she said from just feet away from McCarthy. 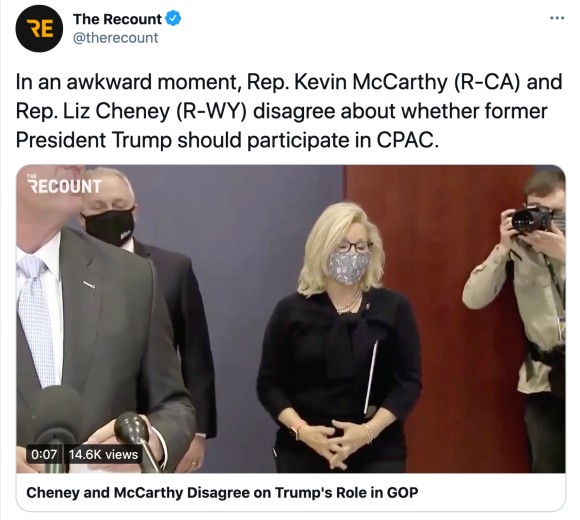 Those of you who know me know I care a lot about what happens outside the Beltway. This is the busiest time of year for most state legislatures, and boy are things moving fast. A whirlwind tour:

CALIFORNIA: Gov. Gavin Newsom (D) signed a $7.6 billion Covid relief package that includes $600 checks for those making under $30,000 a year and billions more for small business and child care aid. Also in California, the state Auditor has criticized the state Air Resources Board for mismanaging climate change programs. The Auditor now says California is on track to miss its greenhouse gas emission targets.

ILLINOIS: Former state House Speaker Mike Madigan (D), who resigned last week in what can only be described as a seismic event in state politics, wants his successor to resign. Madigan hand-picked Edward Guerra Kodatt (D) to fill his seat, but two days later he accused the 26-year old of unspecified “alleged questionable conduct” and told him to quit.

ARKANSAS: The multi-state effort by Republican legislators to tighten voting laws is hitting the state Senate here, where senators advanced a bill to tighten voter identification rules. We don’t think any Democrats are on the verge of winning office in Arkansas, but it’s part of a pronounced trend in states like…

VIRGINIA: The Virginia Republican Party will nominate statewide candidates this year at a drive-up convention at Liberty University on May 8. The state party has been engaged in an internal war over how to handle their nominating process, and state Sen. Amanda Chase (R), the Trumpiest of the potential gubernatorial candidates, had been pressing for a primary. The more traditional conservative candidates are just fine with a convention. 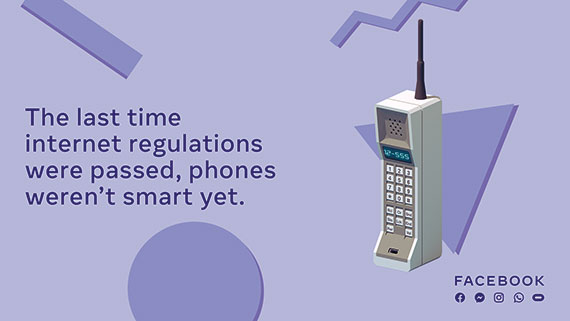 It’s been 25 years since comprehensive internet regulations were passed.

But a lot has changed since 1996. We support updated regulations to set clear guidelines for protecting people’s privacy, enabling safe and easy data portability between platforms and more.

Ghana get my shots:

The World Health Organization (WHO) and Gavi, the global vaccine alliance, said the first doses of AstraZeneca/Oxford coronavirus vaccine landed this morning in Accra, Ghana’s capital. The 600,000 doses will only cover about 1 percent of the West African nation’s population, but it’s the beginning of a drive to deliver vaccine to low- and middle-income countries. By last week, a whopping 130 countries had not received a single shot. Cote d’Ivoire receives their first shipment later this week.

Total number of vaccinations administered in the U.S.: 65 million shots have been given.

Seven-day average of doses administered: An average of 1.28 million doses. 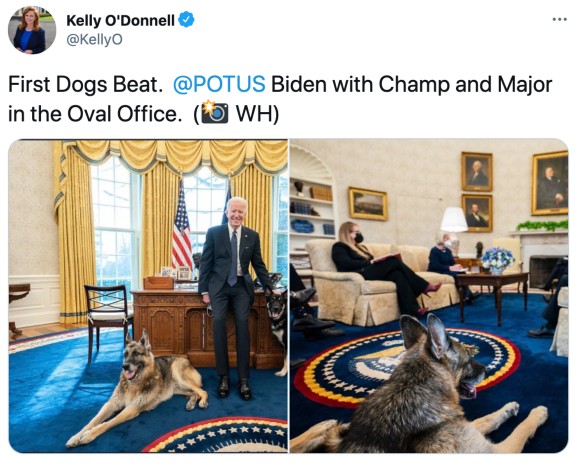 The House and Senate are in session. The House will take up the Equality Act, sponsored by Rep. David Cicilline (D-R.I.), and a public lands bill sponsored by Rep. Diana DeGette (D-Colo.). The Senate will consider former Michigan Gov. Jennifer Grahnolm’s nomination to head the Department of Energy.

President Biden and Vice President Harris meet with bipartisan members of Congress to discuss supply chains this afternoon, and Biden signs his executive order at 4:15pm. Harris swears in U.S. Ambassador to the United Nations Linda Thomas-Greenfield right as this newsletter hits your inbox. At 6:15pm, she swears in Agriculture Secretary Tom Vilsack.

If Vilsack wants to break the record to become the longest-serving Agriculture Secretary, and the longest-serving Cabinet member in U.S. history, he’s going to have to be in it for the long haul. James Wilson ran the Agriculture Department under Presidents McKinley, Roosevelt and Taft for a day shy of 16 years between 1897 and 1913.

Event invitation — Thursday: The Hill is hosting a virtual event, “Race & Justice Imperative.” Details and how to RSVP: https://bit.ly/2NRntWE

This morning: The Supreme Court heard oral argument in “Lange v. California.” The gist of the case: “Whether an officer without a warrant has probable cause to enter a home while in pursuit of a person believed to have committed a misdemeanor.” Livestream: https://bit.ly/3aJQA7h

Do you love cool maps and charts? I spent the last few days building graphics that show what happened in 2020, comparing President Biden and former President Trump’s vote shares with the members of Congress in the same districts. Check it out here. Fun fact: There are fewer split ticket districts (House Democrats who hold seats Trump won, House Republicans who hold seats Biden won) than at any time since 1920.

Well, this is pretty terrifying:

A dad turned his kids’ drawings into realistic images. Check them out: https://bit.ly/2Mf35hQ

And because you made it this far, here’s one fluffy creature: http://bit.ly/2NXl39f