Via CNN’s Kaitlan Collins, President Biden is expected to announce this afternoon that all adult Americans will be eligible for the COVID-19 vaccine by April 19, almost two weeks earlier than expected. https://bit.ly/3cTwetp

The previous date that all adult Americans would have been eligible: May 1

What Biden will also tout: That 150 million doses of the COVID vaccine have been administered.

KEEP IN MIND ABOUT BIDEN’S ANNOUNCEMENT — THAT’S ALREADY THE CASE IN MORE THAN TWO THIRDS OF STATES:

As of today, 35 states have opened COVID vaccine eligibility to all American adults. https://bit.ly/2PYensk

^ By the way: Delaware and New York opened eligibility today (!)

A bit on Hastings’s career: “Hastings started his career as a civil rights attorney and was nominated by former President Carter in 1979 as a federal judge in Florida. Nearly a decade later, he was impeached by the House for bribery and perjury and convicted by the Senate … Hastings later made an unlikely political comeback in 1992, winning a seat in the same House of Representatives that impeached him years earlier.” He then served for 15 terms. 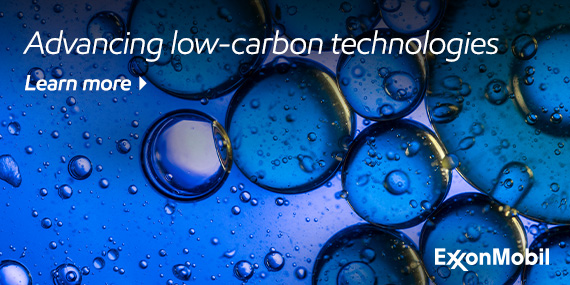 You may bypass the rules two more times, young grasshopper:

Via The Hill’s Alexander Bolton, The Senate parliamentarian ruled Monday that Democrats can pass two more bills with just 51 votes instead of the usual 60-vote threshold to avoid the filibuster. https://bit.ly/2OsH3ta

What this means: President Biden’s infrastructure package can likely pass without any Republican votes.

Add MLB to the list of ‘do not broach’ at family gatherings:

Via The Hill’s Alexander Bolton, “Republicans are spoiling for a high-profile fight with MLB as they ramp up pressure on the league’s commissioner to reverse a decision to pull the All-Star Game from Atlanta over Georgia’s new voting law.” https://bit.ly/3cSqfFe

And the fight is expanding to other states: “The fight is quickly spreading to other states as well, with Texas Gov. Greg Abbott (R) saying he won’t throw out the first pitch at the Texas Rangers’ home opener after MLB adopted ‘what has turned out to be a false narrative about Georgia’s election law reforms.’”

How this could play out: https://bit.ly/3cSqfFe

What does Friday’s attack mean for Capitol security?:

Via The Hill’s Cristina Marcos, “Lawmakers are struggling to balance maximizing security at the Capitol with wanting to maintain its traditional open campus in the wake of the latest attack on the grounds.” https://bit.ly/3fPWAOS

Lawmakers in both parties wanted the Jan. 6 security fencing to be removed: “But barely a week had passed after security officials finished taking down the outer fence to allow traffic on surrounding streets when a man rammed a car into a security barricade and hit two Capitol Police officers on Friday, killing one and injuring the other.”

The debate over what happens now: https://bit.ly/3fPWAOS

THE CAPITOL POLICE OFFICER WHO DIED WILL LIE IN HONOR IN THE CAPITOL ROTUNDA:

The Easter Bunny made the rounds at the White House yesterday. 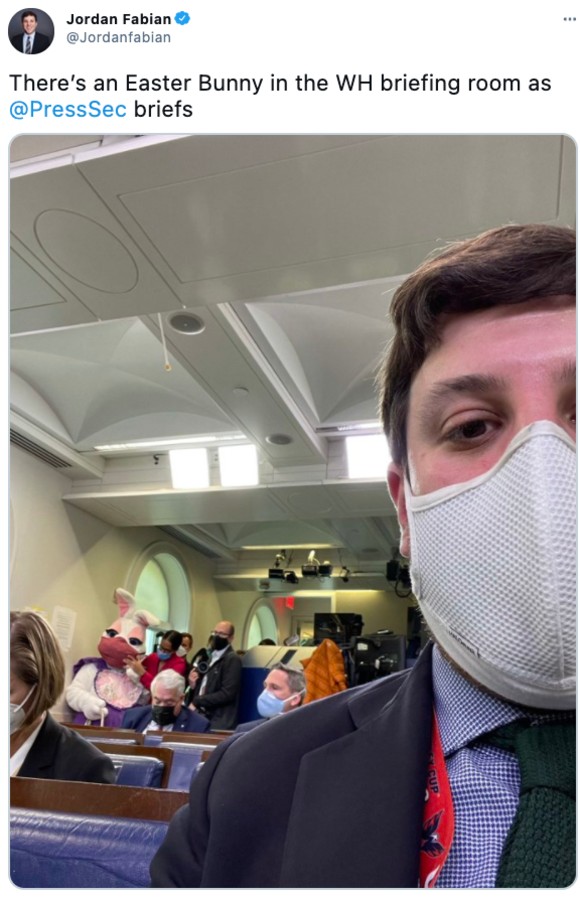 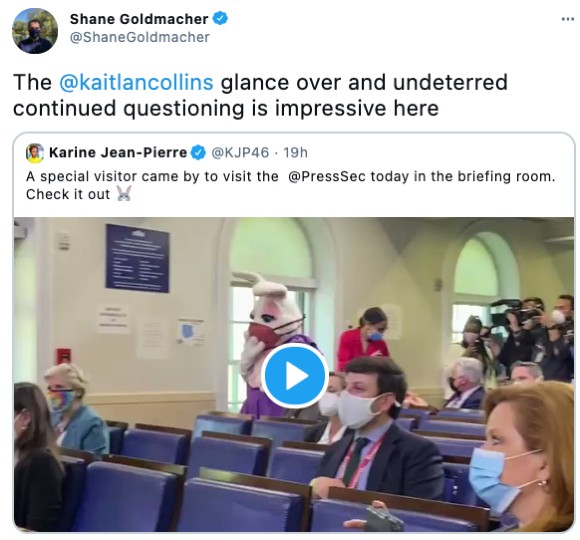 I repeat, the bunny has seized the podium: 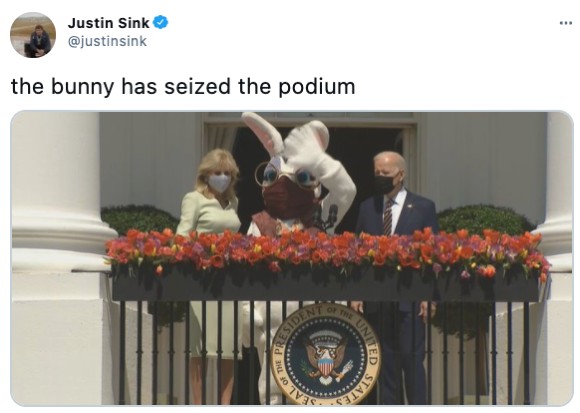 Here’s the photo to prove it: https://cnn.it/2RbCBjv

Papa Tony calms us down:

Fauci said on MSNBC’s Morning Joe: “As long as we keep vaccinating people efficiently and effectively, I don’t think that’s gonna happen,” Fauci said about a potential fourth wave. “That doesn’t mean that we’re not going to still see an increase in cases.”

A year ago now:

It’s been a full year since I started reporting the daily U.S. COVID-19 cases and deaths. https://bit.ly/39LNfnv

Total number of vaccinations administered in the U.S.: 167 million shots have been given.

Seven-day average of doses administered: An average of 3.05 million doses

Getting traction — lots of people have been zooming in to see Trump’s office: 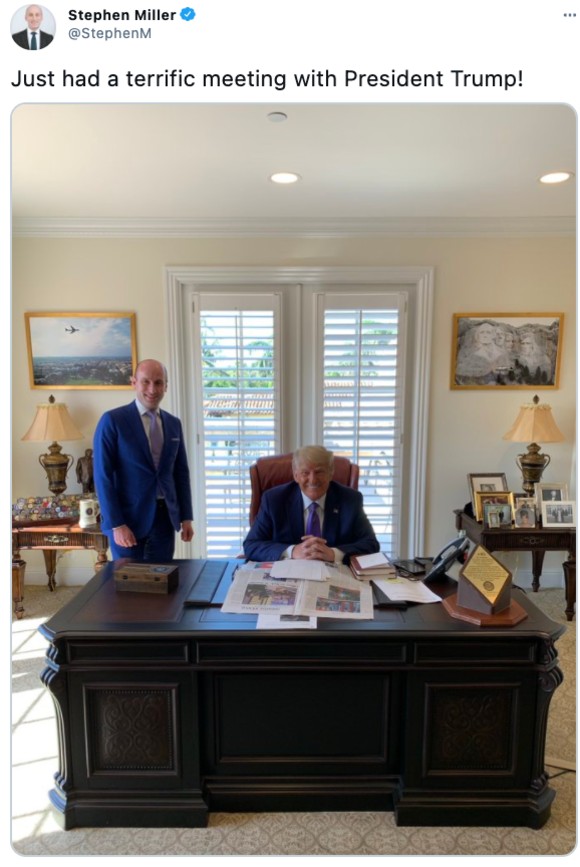 A few observations from The New York Post: Including what appears to be a Diet Coke. https://bit.ly/3dIcU1q

The House and Senate are out. President Biden is in Washington, D.C. Vice President Harris is in Chicago today.

Via Washingtonian’s Anna Spiegel, “A Huge Boardwalk-Themed Bar Is Opening at the Wharf with Games and Beach-Style Fare: The Boardwalk Bar & Arcade is slated to open by the end of the year.” What we know about the new Wharf spot: https://bit.ly/3dBwfkZ

And to brighten your Tuesday afternoon, here’s a club I really want to join: https://bit.ly/3dHSqWy