The Hill’s 12:30 Report: What the J&J vaccine pause means for COVID pandemic

Two steps forward, one step back…:

Via The New York Times’s Noah Weiland, Sharon LaFraniere and Carl Zimmer, “Injections of Johnson & Johnson’s single-dose coronavirus vaccine came to a sudden halt in much of the country on Tuesday after federal health agencies called for a pause in the vaccine’s use following the emergence of a rare blood clotting in six recipients.” https://nyti.ms/2RApSap

Which federal agencies are calling for the pause?: The US Centers for Disease Control and Prevention (CDC) and the U.S. Food and Drug Administration (FDA) https://cnn.it/3e2rRLU

What happened?: Six women between the ages of 18 and 48 developed a rare type of blood clot between six and 13 days after their vaccinations. One woman died and another is in the hospital. https://nyti.ms/2RApSap

Putting those six cases into context: More than 6.8 million doses of the Johnson & Johnson vaccine have been administered. I.e.: Roughly one in a million.

The White House says it shouldn’t affect the vaccine pace too much: “This announcement will not have a significant impact on our vaccination plan: Johnson & Johnson vaccine makes up less than 5 percent of the recorded shots in arms in the United States to date,” said White House COVID response coordinator Jeff Zients. https://bit.ly/3a8plTo

What about existing appointments?: “We are working now with our state and federal partners to get anyone scheduled for a J&J vaccine quickly rescheduled for a Pfizer or Moderna vaccine.” Read the full White House statement: https://bit.ly/3a6NHgq

What this means for daily vaccination numbers: “This is more than enough supply to continue the current pace of vaccinations of 3 million shots per day, and meet the President’s goal of 200 million shots by his 100th day in office—and continue on to reach every adult who wants to be vaccinated,” Zients said.

It’s Tuesday. The news is all pretty heavy today, so I apologize in advance. But as always, I promise to leave you on a good note at the end. I’m Cate Martel with a quick recap of the morning and what’s coming up. Send comments, story ideas and events for our radar to cmartel@thehill.com — and follow along on Twitter @CateMartel and Facebook. 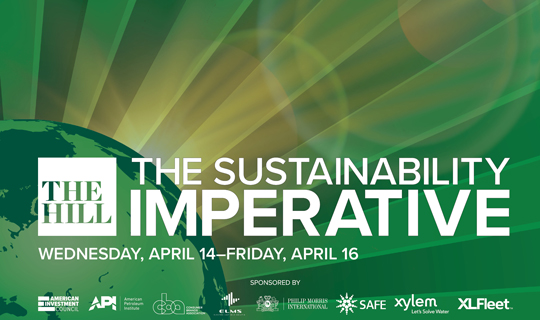 This puts it into context: “Dr. Carlos del Rio, executive associate dean at Emory University School of Medicine, says on CNN ‘you have a much higher chance of getting run over by a car’ than a blood clot from J&J. Says to alert a doctor if you develop shortness of breath, leg pain, headache within 2-3 weeks” (Via CNN’s Kaitlan Collins) https://bit.ly/3texVYf 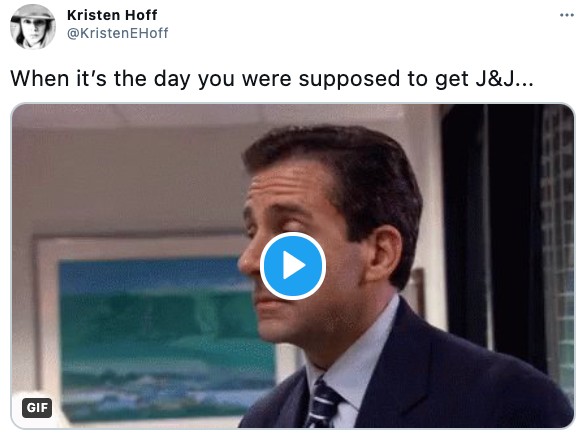 The pause in the J&J shots is raising fears of new vaccine hesitancy. What this means, via The Hill’s Reid Wilson: https://bit.ly/3g1BltE

Total number of vaccinations administered in the U.S.: 190 million shots have been given.

Seven-day average of doses administered: An average of 3.21 million doses

THE LATEST IN MINNESOTA

Daunte Wright’s death has been ruled a homicide:

The Hennepin County Medical Examiner confirmed on Monday that 20-year-old Black man Daunte Wright “died of a gunshot wound of the chest and manner of death is homicide.” https://bit.ly/3wUsFuU

REACTION FROM THE OBAMAS:

“The fact that this could happen even as the city of Minneapolis is going through the trial of Derek Chauvin and reliving the heart-wrenching murder of George Floyd indicates not just how important it is to conduct a full and transparent investigation, but also just how badly we need to reimagine policing and public safety in this country.”  Read the Obamas’ full statement: https://bit.ly/3gdcLpT

Another night of protests:

“Protesters in Minnesota clashed with police on Monday evening after the police chief in Brooklyn Center said that the officer who shot Daunte Wright during a traffic stop on Sunday meant to deploy a taser instead of her gun.” https://bit.ly/328h3Gv

“Hundreds of people flowed into the streets of the Minneapolis suburb to renew calls for police reform and an end to systemic racism in law enforcement.”

Keep in mind — the Derek Chauvin trial is happening: “Tensions in area and nation are already strained amid the trial of Derek Chauvin, a former Minneapolis police officer accused of murdering George Floyd.”

Here is video of a tense interview on CNN last night: 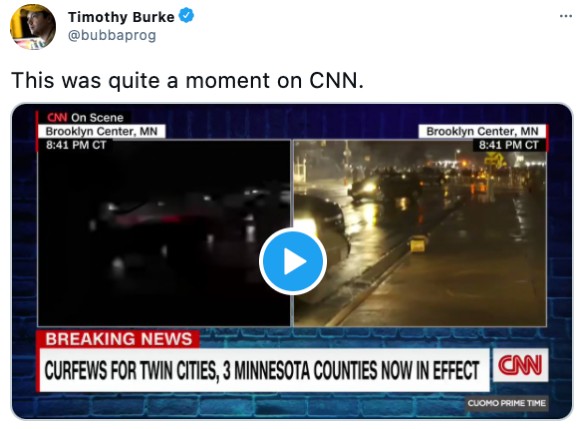 The father of Daunte Wright said he “can’t accept” that authorities are claiming that the police officer mistakenly pulled out her gun instead of a taser. 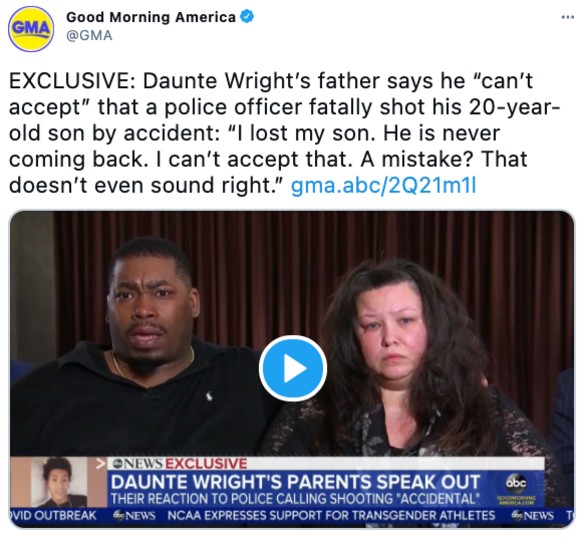 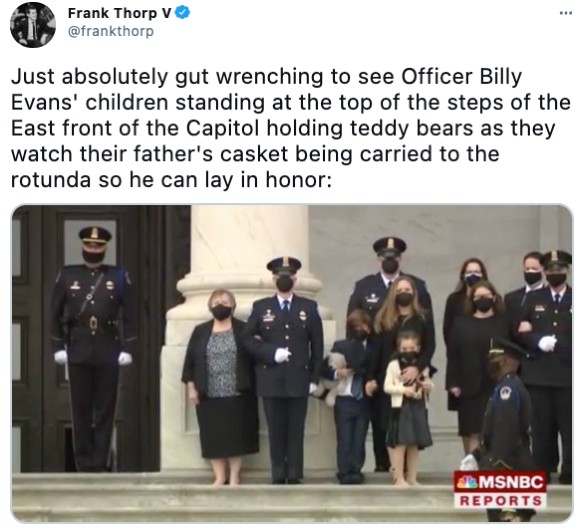 And here’s a photo of a remembrance table for Evans on the Senate side of the plaza: https://bit.ly/3a9b6h3

2 p.m. EDT: President Biden and Vice President Harris meet with members of the Congressional Black Caucus. Late this a.m. — the White House releases a list of the members who will attend: https://bit.ly/2PQMPph

We need SOME good news today:

And to leave you on a good note, here’s a monkey enjoying a few strawberries: https://bit.ly/2Rrum2J