President Biden will meet with the family of George Floyd tomorrow at the White House on the anniversary of Floyd’s death. https://bit.ly/3wtn1Px

TIMING — FLOYD POLICING BILL IS STALLED IN THE SENATE:

President Biden had set a May 25, 2021, deadline to pass the George Floyd Justice in Policing Act. Congress is expected to miss that deadline, though, as at least 10 Senate Republican votes are needed. https://cnb.cx/3ukWVMZ

Via The Hill’s Amie Parnes and Morgan Chalfant: https://bit.ly/3bNwaKO

It’s Monday.  Umm, how is this the last week of May…?  Anyway, I’m Cate Martel with a quick recap of the morning and what’s coming up. Send comments, story ideas and happy hour suggestions to cmartel@thehill.com — and follow along on Twitter @CateMartel and Facebook.

Photo of the crowd around Phil Mickelson yesterday: https://bit.ly/3495ekC

A witness in the Trump impeachment trial is suing:

Via The Hill’s Dominick Mastrangelo and Harper Neidig, “A former top diplomat who testified against former President Trump during his first impeachment trial is suing former Secretary of State Mike Pompeo and the State Department, alleging that his legal fees were not paid as promised.” https://bit.ly/3fB7c2s

Details: “Trump’s former ambassador to the European Union, Gordon Sondland, is seeking $1.8 million in damages from Pompeo and the State Department in a suit filed in federal court in the District of Columbia on Monday.”

What Sondland is alleging: “Pompeo had promised him that the government would cover the necessary legal costs of complying with a House subpoena stemming from the inquiry but later backed out of the agreement when it became apparent that the former ambassador’s testimony would be damning for the Trump White House.”

Back and ready for vaccinated crowds!:

Via The Hollywood Reporter’s Alex Weprin, “CBS’ The Late Show with Stephen Colbert will return to The Ed Sullivan Theater on Broadway on June 14, the network said Monday morning.” https://bit.ly/2QL10MS

How it will work: “All guests of the show will need to require proof that they are fully vaccinated against COVID-19, and face masks will be optional for those in the crowd. Crew members will continue to be tested for the virus on a regular basis.”

Via The Hill’s Jordain Carney, “The Senate is set to have a jammed-packed week as senators try to bring a massive piece of legislation across the finish line and huddle behind the scenes on a slew of increasingly time-sensitive issues.  The House is out of town until mid-June. The Senate is likely to leave on Thursday afternoon for a one-week break.” https://bit.ly/3oID8pI

WHAT’S ON THE MENU THIS WEEK:

China competitiveness bill: “The Senate is quietly making progress on a bill to invest more than $100 billion to counter China’s competitiveness, a rare area that has attracted across-the-aisle agreement. The Senate voted last week to start debate on the bill, and Schumer wants to get it wrapped up before the chamber leaves town.”

Jan. 6 commission: “Republicans are hardening against a House-passed bill to establish a commission to probe the Jan. 6 attack, signaling that without significant shifting it’s unlikely to get the 10 GOP votes to pass the Senate.” It’s possible the Senate could vote on the bill this week, but the China bill may keep the Senate busy.

Infrastructure: “Infrastructure talks between the Biden administration and a key group of GOP senators are bogging down over big differences between the scope of the bill, the price tag and how to pay for it.” Keep in mind: “Time is quickly running out to strike a bipartisan deal. Democrats and the White House have pointed to the end of May as the timeline for Republicans signaling whether they will get on board.”

Voting rights: “Democrats are poised to have another family meeting this week on the For the People Act, the party’s top legislative priority heading into 2022.”

Context and details for each: https://bit.ly/3oID8pI

HOW DEMOCRATS ARE SEIZING ON THE GOP’S OPPOSITION TO A JAN. 6 COMMISSION:

Via The Hill’s Max Greenwood: https://bit.ly/3bPS2oK

The gist: The chances of a bipartisan commission are increasingly low, but some Democrats think that could backfire for Republicans in the midterms.

CNN’s Kaitlan Collins tweeted, “25 states and DC have now fully vaccinated at least half their adult populations, per CDC data. The state with the highest number of adults fully vaccinated is Maine.” https://bit.ly/2SnxRrq

Total number of vaccinations administered in the U.S.: 286 million shots have been given.

Seven-day average of doses administered: An average of 1.83 million doses per day

A big motivator for Dems:

Via The Hill’s Alexander Bolton, “Democratic senators say if the Supreme Court strikes a blow against Roe v. Wade by upholding a Mississippi abortion law, it will fuel an effort to add justices to the court or otherwise reform it.” https://bit.ly/3uhzX9u

How so: “The Supreme Court’s conservative majority this week agreed to hear the Mississippi case, which could dramatically narrow abortion rights by allowing states to make it illegal to get an abortion after 15 weeks of pregnancy.”

How this could play out: https://bit.ly/3uhzX9u

A day in the life of President Biden:

The Washington Post’s Ashley Parker has an interesting glimpse into the day of President Biden. https://wapo.st/3hPBEZp

“Current and former advisers say Biden’s typical day reveals a creature of habit with well-worn routines and favorite treats, from orange Gatorade to chocolate chip cookies; a tactile politician eager to escape the Washington bubble who meets privately with people who write him letters; and the patriarch of a sprawling Irish-Catholic clan who abruptly interrupts high-level meetings to take calls from family members.”

Funny tidbit, which I can relate: “Biden sometimes takes his lunch on the go to various meetings, in what [Sen. Chris] Coons [(D-Del.)] described as ‘not quite a lunch pail, but it’s his little bag of stuff, so if he gets peckish in a meeting he can have something healthy’— often a protein bar, a peanut-butter-and-jelly sandwich and a travel-size orange Gatorade. ‘He has the tastes of a 5-year-old,’ a longtime Biden adviser quipped.” https://wapo.st/3hPBEZp

The inside look into Biden’s day: https://wapo.st/3hPBEZp 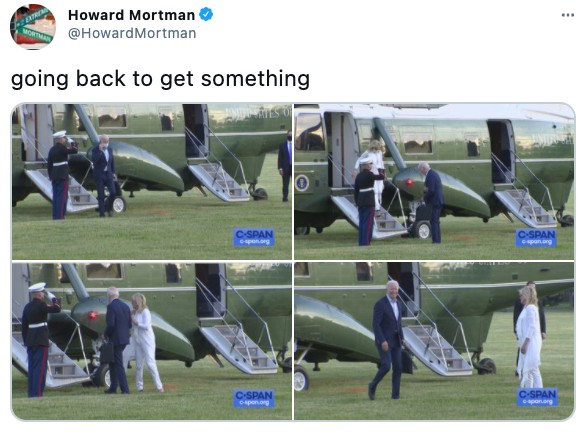 A joke too obvious to ignore: 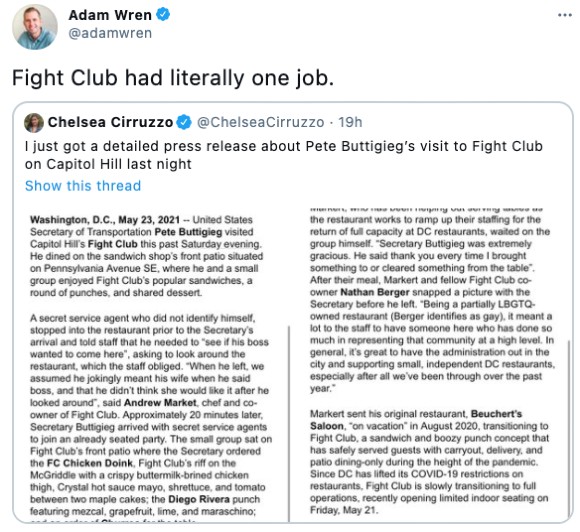 5:30 p.m. EDT: The Senate holds a cloture vote on the nomination of Chiquita Brooks-LaSure as administrator of the Centers for Medicare and Medicaid Services.

And because you made it this far, here’s a turtle looking for a comfy spot to nap: 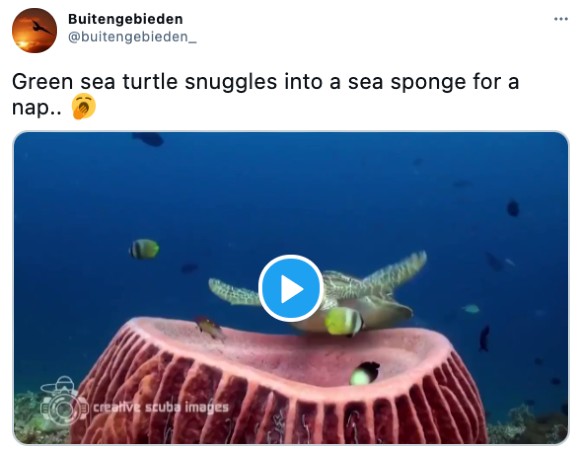