Texas House Democrats have fled to Washington to block a vote on election overhaul legislation that’s front and center on Gov. Greg Abbott’s (R) agenda, a dramatic last-ditch effort to stop a bill they see as directly targeting minority voters. Some members plan to meet Senate Majority Leader Chuck Schumer (D-N.Y.) Tuesday, and legislators tell us they have a clear message for D.C. Democrats: Help us, you’re our only hope.

“The clock is ticking for us. We really need Congress to act and to pass H.R. 1 [the For the People Act],” state Rep. Alex Dominguez (D) told your author this morning. “If [Congress doesn’t], not only will this bill take effect in Texas, similar bills will take place in other states.”

And therein lies the truth of the matter: Denying Republicans a quorum will force the GOP to make minor changes to the election overhaul bill at best. At worst, it just delays inevitable passage. Remember, back in 2003, when Democrats fled a Tom DeLay-backed mid-decade redistricting bill, the legislation passed anyway.

It’s Tuesday. I’m Reid Wilson, filling in for Cate with a quick recap of the morning and what’s coming up. Send comments, story ideas and events for our radar to cmartel@thehill.com — and follow along on Twitter @CateMartel and Facebook. 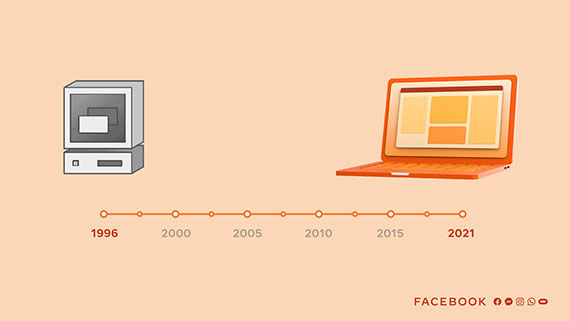 It’s been 25 years since comprehensive internet regulations passed. See why we support updated regulations on key issues, including:

Progress on the Dem-only infrastructure bill:

Via The Hill’s Jordain Carney, Democrats are getting closer to a deal on a $3 trillion to $4 trillion infrastructure package they would pass via reconciliation. Senate Majority Leader Chuck Schumer met for two hours with Budget Committee chairman Bernie Sanders (I-Vt.) on Monday night. Sen. Mark Warner (D-Va.) is emerging as a key player in the negotiations as Democrats narrow in on a topline funding figure.

And/but: A spanner in the works for the smaller, bipartisan infrastructure bill. The 11 Republicans engaged in negotiations over the $1.2 trillion spending package still want details on pay-fors. Sen. Mike Rounds (R-S.D.), one of the negotiators, said he wasn’t sure any pay-fors are locked in yet. “I think that’s still a matter for discussion,” he said. (The Hill)

Via The Hill’s Sylvan Lane, Consumer prices rose 0.9 percent in June, and the consumer price index jumped at an annual rate of 5.4 percent last month, both higher than economists had expected. The annualized inflation increase is the highest since August 2008. Energy and gas prices were way up, and food costs are increasing too. (The Hill)

Historical context: The Republican National Committee is sending out a steady stream of emails blasting the Biden administration for rising inflation. But Biden has a long way to go before he invites comparisons to Jimmy Carter, or even George H.W. Bush. See the historical chart from the Federal Reserve of St. Louis here.

Via The Hill’s Morgan Chalfant, First lady Jill Biden is headed to Tokyo to lead the U.S. delegation to the opening ceremony of the Olympic Games. It’s her second chance to lead a delegation, after she and then-Vice President Biden traveled to Vancouver to kick off the 2010 games. (The Hill) 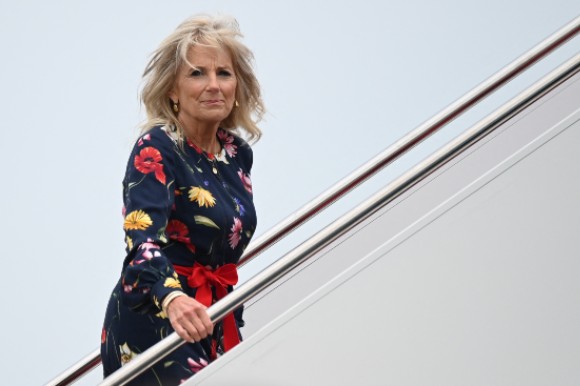 Gavin Newsom, not a Democrat:

CALIFORNIA: Gov. Gavin Newsom’s name will appear on the recall ballot in September without identifying him as a Democrat, after a judge ruled he missed an official deadline to designate his party affiliation. The judge said Newsom’s argument that the missed deadline was a good-faith error wasn’t enough to supersede crystal clear election law. (LA Times)

Thought bubble: This isn’t the first time Newsom has been the victim of a self-inflicted wound. As we’ve written before, he has tremendous advantages that former California Gov. Gray Davis didn’t in 2003, but he still needs to run a near-flawless campaign to survive.

IOWA: Deirdre DeJear (D), who lost a close race for Iowa Secretary of State in 2018 before becoming a top advisor to then-Sen. Kamala Harris, is back. DeJear has filed papers to explore a run against Iowa Gov. Kim Reynolds (R) in 2022. She’s not the only Democrat in the race, but she is the only Democrat running so far who has a national fan base. And hey, maybe her buddy the VP is looking for an excuse to go back to Iowa. (Des Moines Register)

KENTUCKY: Auditor Mike Harmon (R) is the first Republican to announce a challenge to Gov. Andy Beshear (D) in 2023. He won’t get the primary field to himself – Reps. Andy Barr (R) and James Comer (R), Agriculture Commissioner Ryan Quarles (R) and Kelly Craft, former President Trump’s ambassador to Canada and the U.N., have all been mentioned as potential candidates. (Lexington Herald-Leader) 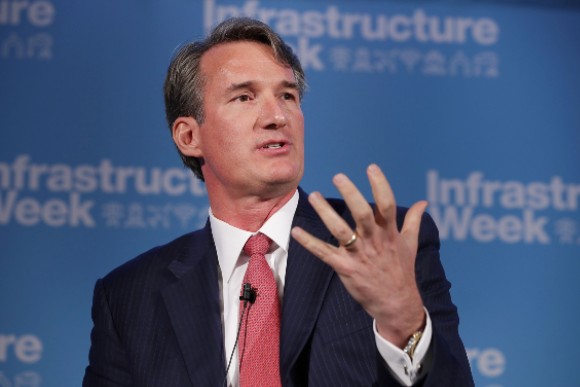 VIRGINIA: Republican gubernatorial nominee Glenn Youngkin is skipping a traditional debate hosted by the Virginia Bar Association. His stated reason: He objects to the Bar’s choice of moderator, PBS NewsHour managing editor Judy Woodruff. Woodruff’s sin was donating $250 to the Haitian disaster relief fund run by the Clinton Foundation in 2010 (a fundraising campaign that was spearheaded by former Presidents Clinton and George W. Bush). (Richmond Times-Dispatch)

U.S. officials met privately with Pfizer executives on Monday pushing for fast authorization of a booster shot, as top health experts say those extra doses aren’t necessary at the moment. Israel has started administering third doses of the Pfizer-BioNTech mRNA vaccine to some at-risk patients. Anthony Fauci isn’t sold yet, and Pfizer is gathering more information on the amount of antibody response in those who receive a third dose. 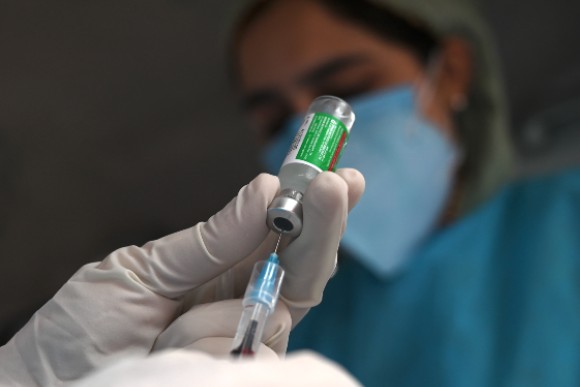 Coronavirus cases in the U.S.: 33,892,364 people have tested positive for the coronavirus.

Total number of vaccinations administered in the U.S.: 335 million shots have been given.

Seven-day average of doses administered: An average of 527,353 million doses 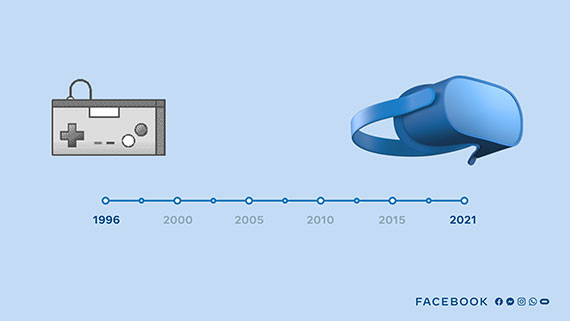 2021 is the 25th anniversary of the Telecommunications Act of 1996, the last major update to internet regulation. It’s time for an update to set clear rules for addressing today’s toughest challenges.

See how we’re taking action on key issues and why we support updated internet regulations. 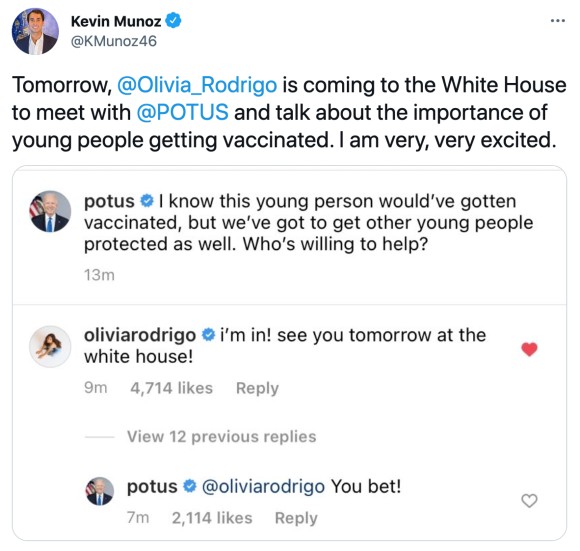 President Biden heads to Philadelphia to deliver an address on voting rights at the National Constitution Center this afternoon. Vice President Harris has no public events. The House holds a pro forma session today. The Senate is back this morning, considering the nomination of Uzra Zeya to serve as Under Secretary of State for Civilian Security, Democracy and Human Rights.

Today at 1 p.m., The Hill makes its next virtual stop on our Small Business Recovery road trip in Minneapolis. What support do minority-owned firms in the city still urgently need, and what opportunities at the federal and local levels are being created to help these businesses recover and thrive long-term? Feat. Rep. Angie Craig (D-Minn.), Minneapolis Mayor Jacob Frey, and more. RSVP. https://bit.ly/2Trjkfl

Connectivity is central to how we live, work, and play. Yet millions of Americans lack access to the benefits of this technology and are being left behind. On July 14 at 1 p.m., Sen. Ben Ray Luján, Rep. Bob Latta, FCC Commissioner Geoffrey Starks, San Jose Mayor Sam Liccardo, and more will join to discuss today’s challenges while preparing for the future of an ultra-connected world. RSVP. https://bit.ly/2SVxWn2

Nothing stops the mail:

The Senate has passed a measure honoring members of the 6888th Central Postal Directory Battalion, credited with solving a massive mail crisis for American servicemembers in Europe near the end of World War II, with the Congressional Gold Medal. The Six Triple Eight, as they were known, was the only battalion of Black women deployed to Europe during the war. Based in England, they cleared a backlog of 17 million pieces of mail twice as fast as expected. (AP)

Seven members of the 6888th are still around. Think any of them might be available to oversee USPS for a while?

And to brighten your afternoon, here’s a cat making a phone call: https://bit.ly/3jOxzG0 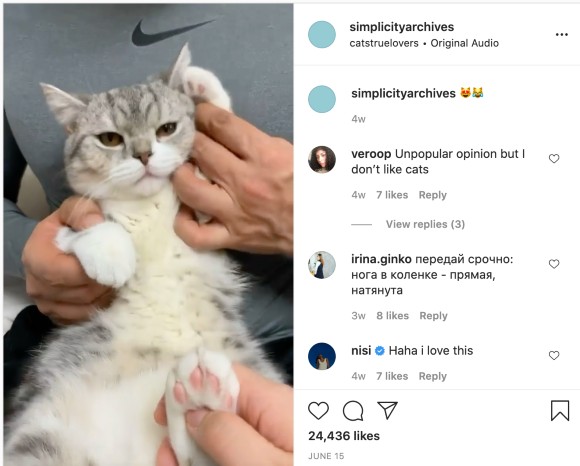 ^ Make sure you have your sound on for this.