LATEST WITH THE INFRATRUCTURE BILL

Spotted – Joe Biden on an Amazon Prime spree ordering all the victory lap decorations he can find:

Via The Hill’s Alexander Bolton, “Senate Republicans are about to hand President Biden a huge political victory by voting for a historic $1 trillion infrastructure package that the president can then tout as fulfilling a campaign pledge to restore bipartisanship in Washington.” https://bit.ly/3AcJZMz

How many Republicans are expected to vote for the bill: It could be as many as 20 Republican senators (!) 60 votes are needed to pass the bill, meaning at least 10 Republicans have to be on board.

WHEN THE BILL COULD PASS:

Senators are looking at holding a vote on the bill this weekend. https://bit.ly/3fzkz3Z

Why the vote could be Sunday instead of Saturday: “Sen. Dick Durbin (D-Ill.) said a vote to end debate was ‘possible’ on Saturday, but cautioned that it wasn’t final because senators were still haggling over up to 60 hours of time they would still need to burn through after that vote under the Senate’s rules before they could get to final passage for the bipartisan agreement.”

It’s Thursday! I’m Cate Martel with a quick recap of the morning and what’s coming up. Send comments, story ideas and events for our radar to cmartel@thehill.com — and follow along on Twitter @CateMartel and Facebook.

A MESSAGE FROM AT&T

AT&T is making a $2 billion, 3-year commitment to help connect communities to their American Dream 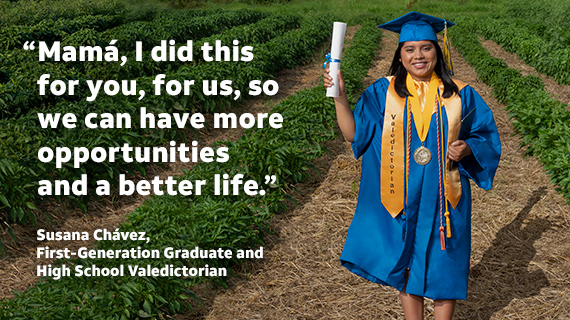 Susana Chávez became valedictorian of International High School at Langley Park while juggling numerous jobs throughout school. But what kept her powering through it all was her American Dream. With the help of accessible and affordable broadband, she was able to focus on her studies, get assistance from teachers and stay in touch with her mother back home. And thanks to Access from AT&T, we can connect low-income households like Susana’s, and more communities in areas we serve with their American Dream. Find out how.

This is amazing — ‘Rafael Nadal Falling In Love With DC Is The Rom-Com We Need.’:

The photos of Nadal being spotted around the city are pretty great.

My favorite: First, Nadal spotted by Levain Bakery. Second, he met a dog who is also named Rafa during the excursion. 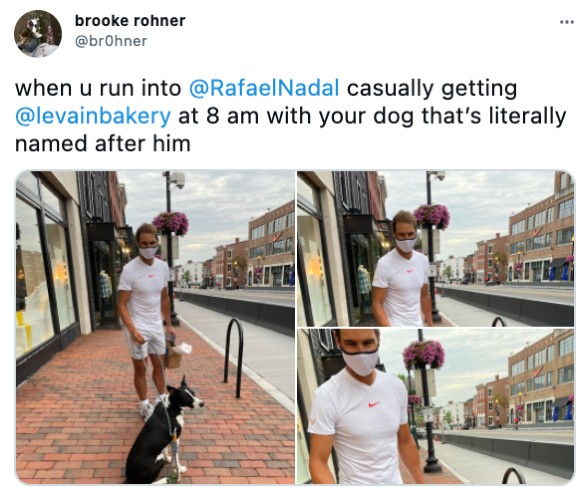 Oooh he either rented or brought a bike to tour the monuments: https://bit.ly/3AfJhhO

And took a selfie outside the U.S. Capitol: https://bit.ly/3juRs31

Via The New York Times’s Coral Davenport, “President Biden on Thursday will roll out a strategy that uses tailpipe regulations to try to rapidly shift Americans from gasoline-powered cars and trucks toward electric vehicles — a central part of his plan to cut pollution that is heating the planet.” https://nyti.ms/2WPHYrg

Biden’s reasoning — it’s not just for environmental reasons: “In addition to his concerns about climate change, the president is worried that the United States is trailing China in the manufacturing of electric vehicles. Mr. Biden also sees opportunities to grow jobs if the domestic supply chain is retooled and expanded to produce batteries and fuel cells in American factories.”

LATEST WITH THE JAN. 6 INVESTIGATION

‘Neither snow nor rain nor heat nor ~August recess~ stays these couriers from the swift completion of their appointed rounds’:

Lawmakers on the special committee investigating the Jan. 6 U.S. Capitol attack are preparing their subpoenas, despite the August recess. https://bit.ly/3AcnozN

Context and details for each from The Hill’s Rebecca Beitsch and Scott Wong: https://bit.ly/3AcnozN

President Biden signs the bill, “An Act to award four congressional gold medals to the United States Capitol Police and those who protected the U.S. Capitol on January 6, 2021,” into law. Watch live: https://bit.ly/2WZKZWb

For all the Moderna mates in the room!:

Moderna said this morning that those who received its COVID-19 vaccine will likely need a booster before the winter. https://bit.ly/3fvGqZV

Wow, this is pretty good: Moderna said that its vaccine is 93 percent effective after six months, compared to Pfizer’s vaccine with an 84 percent efficacy rate after the same time frame.

But what about delta…?: “Still, Moderna CEO Stephane Bancel said on CNBC on Thursday that the data was collected before the delta variant became prevalent in the United States, meaning the equation could change now that the delta variant is widespread.”

This is a very powerful, heartbreaking interview: 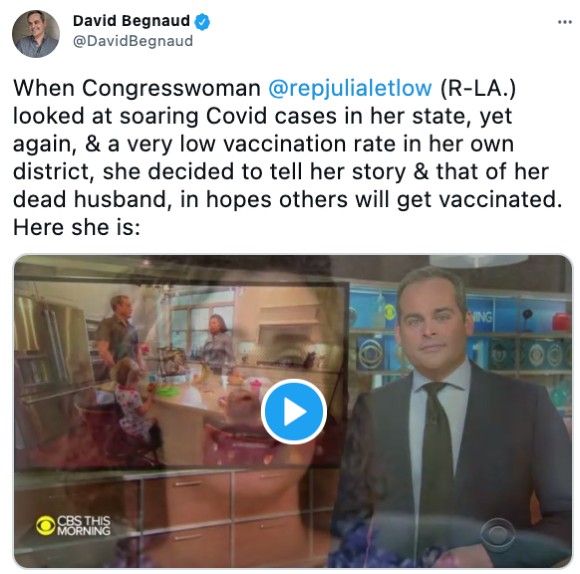 ^AND SO IS MIKE PENCE:
Former Vice President Mike Pence is urging young conservatives to get vaccinated. https://bit.ly/3AfgWIe

Pence told the Young America Foundation’s National Conservative Student Conference: “Now let me say this about the vaccine: I got the shot. My family got the shot. And I want to encourage anyone here who hasn’t gotten the shot who’s eligible to go get it. And if you’re not sure about it, go ask your doctor and get the very best advice you can.” More from Pence: https://bit.ly/3AfgWIe

Total number of vaccinations administered in the U.S.: 348 million shots have been given.

A MESSAGE FROM AT&T 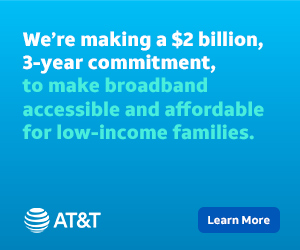 Via Business Insider’s Cheryl Teh, former President Trump’s PAC sent emails to supporters yesterday offering red-and-gold cards for “patriots” to carry in their wallets to show their support. https://bit.ly/3lAAQcz

What’s a Trump card, you ask?: “The emails did not outline exactly what entitled one to carry a ‘Trump Card.’ Clicking on the link to vote for a design led to a fundraising page.”

Photo of the cards: https://bit.ly/3lAAQcz

As a, fellow, overuser of, the comma, I, too, can relate: 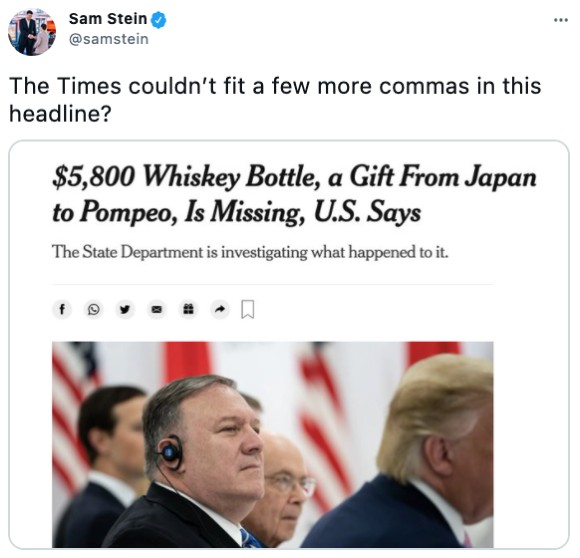 Gah, these clips get me EVERY TIME. Again, I am *not* crying, people.: 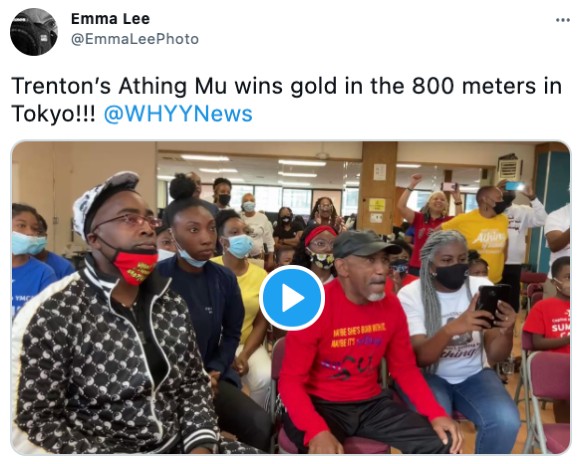 Back story from WHYY’s Emma Lee: “Trenton Track Club coach Al Jennings settles in at the Trenton YMCA to watch his protege, Athing Mu, go for the gold in the 800 meters at the Tokyo Olympics.” https://bit.ly/2WPLMsy

4:30 p.m. EDT: President Biden signs the bill, “An Act to award four congressional gold medals to the United States Capitol Police and those who protected the U.S. Capitol on January 6, 2021,” into law. Livestream: https://bit.ly/2WZKZWb

Via Popville, “Van Gogh: The Immersive Experience” is opening in Washington, D.C., on August 6. Details and photos: https://bit.ly/3yssgR0

And because you made it this far, here’s a pup who likes to take an active role in its haircut: https://bit.ly/3lyWApp