The Hill’s 12:30 Report: Sights and sounds from Election Night

Via The Hill’s Reid Wilson, “A record number of Virginia voters turned out to cast ballots in Tuesday’s elections, delivering a sharp rebuke to Democrats — and offering Republicans a preview of a path back to power ahead of next year’s midterm elections.” https://bit.ly/3mFkjnS

“Those voters chose Gov.-elect Glenn Youngkin (R), a former Carlyle Group chief executive who positioned himself alternatively as a nonthreatening suburban dad or a raging culture warrior, over former Gov. Terry McAuliffe (D), who tried to paint his rival as Donald Trump’s clone.”

Republicans are poised to sweep in Virginia: Including attorney general and the House of Delegates. https://bit.ly/3CHxJpf

Has New Jersey’s governor’s race been called?: Nope. It’s still too close to call. “With 84% of the vote in, Murphy was tied with Republican Jack Ciattarelli.” Where the race stands, from CNN: https://cnn.it/31oBIJw

Reaction from The New York Times’s Shane Goldmacher: “Credit where [it’s] due: The NRCC releasing a list of 13 new House targets the morning after the election was very smart media narrative planning”  https://bit.ly/3BKXW4K

Happy post-election Wednesday! I’m Cate Martel with a quick recap of the morning and what’s coming up. Send comments, story ideas and events for our radar to cmartel@thehill.com  — and follow along on Twitter @CateMartel and  Facebook.

More on each takeaway, from The Hill’s Niall Stanage: https://bit.ly/3CCO3aF

This is a pretty interesting data point: The Hill’s Reid Wilson pointed out, “Terry McAuliffe got a higher vote share this year (48.55%) than he did in 2013, when he won VA GOV (47.8%). Big difference: No Libertarian candidate taking 6.5% of the vote this time around.” https://bit.ly/3bF16fM

Before we knew Youngkin won: NBC’s Alex Seitz-Wald tweeted, “If Terry McAuliffe goes down, ‘I don’t think parents should be telling schools what they should teach’ goes down as the most consequential gaffe since….???” https://bit.ly/3mGROpT

The vibe at the Youngkin victory party: “This is not a ‘Trumpy’ crowd at Youngkin. It feels like a Romney 2012 primary election night. I’ve seen precisely one MAGA hat. None of the vulgar slogans of rally or meme fame. It’s well-dressed, mostly older, mostly white folks sipping wine and IPAs.” (Via NBC’s Garrett Haake: https://bit.ly/3bDBMHa 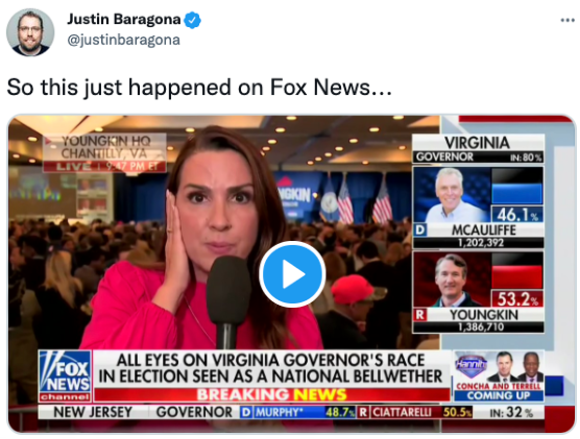 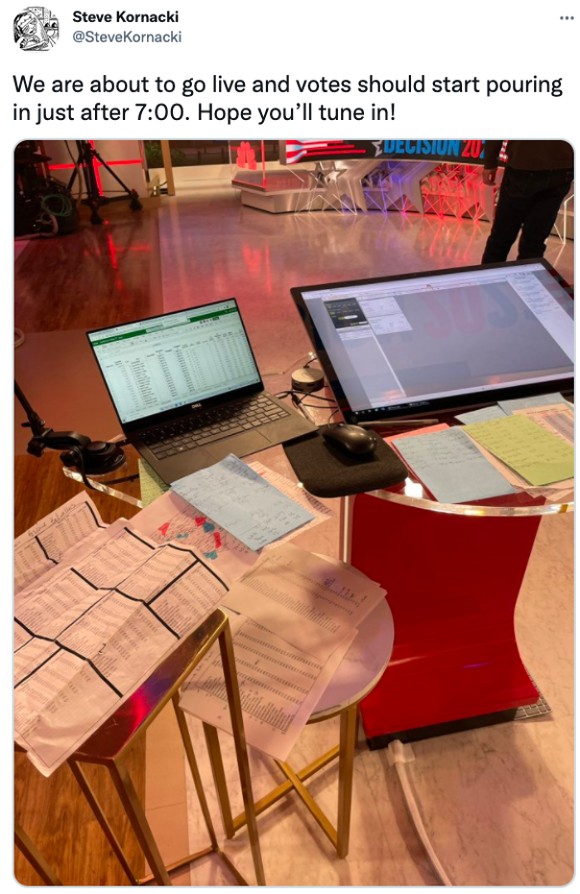 How we know: Speaker Nancy Pelosi (D-Calif.) announced the change in a letter this morning.

Yes, but: “Pelosi stopped short of announcing a Rules Committee vote on the package, which would indicate that House leaders were poised to bring the bill to the floor for a vote.”

So it’s not ~totally~ resolved.

Doesn’t Sen. Joe Manchin (D-W.Va.) oppose this?: He hasn’t been supportive of including paid family leave in the bill so far.

THIS MADE ME LAUGH:

Via The Washington Post’s Lena G. Sun and Katie Shepherd, “Pediatricians are preparing to administer the nation’s first coronavirus children’s vaccine as early as Wednesday after the Centers for Disease Control and Prevention signed off Tuesday night on giving the Pfizer-BioNTech shots to millions of kids ages 5 to 11.” https://wapo.st/3we2G1V

HOW TO GET A SHOT FOR YOUR KID:

Total number of vaccinations administered in the U.S.: 424 million shots have been given.

Seven-day average of doses administered: An average of 1.44 million doses

What they believed would happen: “They forecast the president’s son John F. Kennedy Jr., who has been dead for over 20 years, would appear at that spot, emerging from anonymity to become Donald Trump’s vice president when the former president is reinstated.” More from The Washington Post’s Meryl Kornfield: https://wapo.st/3bCcx7Z

When it was supposed to happen: Around 1:30 p.m. EDT yesterday

When they didn’t appear, what did the crowd think happened?: Some thought they would instead reappear at a Rolling Stones concert that evening.

The theory expanded past the Kennedys: “they then began to add on other dead celebrities, convinced that they, too, would appear, having faked their deaths to avoid the deep state. They began to pick out random people they encountered in the Dallas area as celebrities in disguise, claiming one man was comedian Robin Williams and another comedian Richard Pryor.” More from The Daily Beast’s Will Sommer:  https://bit.ly/3BLfJsC

SIGHTS AND SOUNDS FROM DALLAS:

The crowd was not pleased with the local news crew: Video from Protean Magazine’s Steven Moncelli: https://bit.ly/3COJgmM

One minute before the expected return of JFK Jr.: 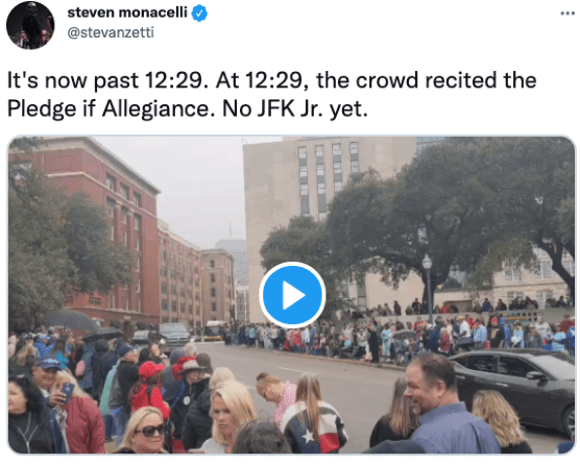 Photo of the crowd gathering the night before the expected return: https://bit.ly/3bziHWC

Wow: “The QAnon people are walking up to random people they think are dead celebrities in Dallas today and introducing themselves. So far they have seen ‘Robin Williams’ and ‘Dale Earnhardt.’” (Via NBC’s Ben Collins) https://bit.ly/3wfV7I2 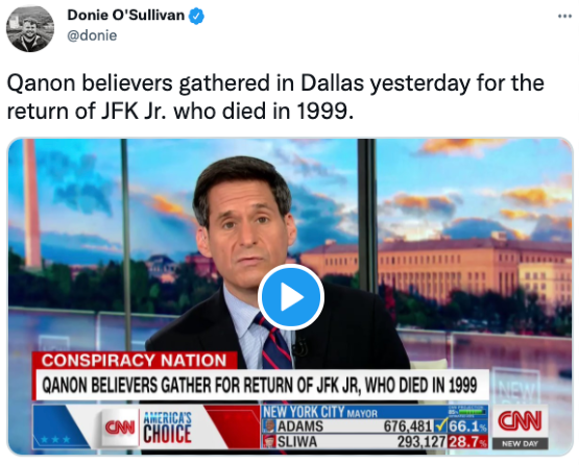 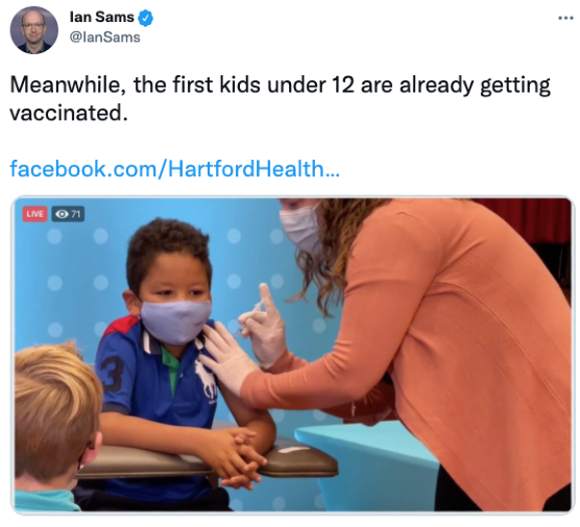 Zoos are bribing animals with M&Ms to get them vaccinated — and honestly, I get why it works:

Via The Washington Post’s Matt Blitz, “How zoos persuade animals to get the coronavirus vaccine. (M&Ms and ice cream help.)” https://wapo.st/3CHj9y1

From the Oakland, Calif. zoo’s Alex Herman: “For all of our large, exotic cats — that’s lions, tigers and mountain lions — they’re being positively reinforced with goat’s milk sprayed in their mouths …  The bears got ice cream and whipped cream. To get the chimp to stay still, we gave her marshmallows and M&M’s.

And because you read this far, here’s a dog with an incredible slo-mo reaction: https://bit.ly/3wa3bdf