Remember when Biden announced a vaccine requirement for businesses? Well, here that is:

The Biden administration just announced the details of its vaccine requirement for businesses with at least 100 employees.

From September?: Yes, Biden made the announcement in September. His administration has been hashing out the details ever since.

Who developed this rule: The Occupational Safety and Health Administration (OSHA)

The requirement: Starting on Jan. 4, businesses with more than 100 employees must require workers to either get vaccinated or be tested for COVID-19 weekly.

^ But health care workers don’t have the testing option: “A second rule issued by the Centers for Medicare & Medicaid Services requires some 17 million health care workers to be vaccinated by the same deadline, Jan. 4, but with no option for weekly testing in lieu of vaccination. The rule covers all employees — clinical and non-clinical — at about 76,000 health care facilities that receive federal funding from Medicare or Medicaid.” (Via NPR’s Andrea Hsu) https://n.pr/3GMIWr3

The administration says it has strong legal footing for this requirement: “Senior administration officials said OSHA’s emergency temporary standard (ETS) to enact the mandate is ‘well within OSHA’s authority under the law and consistent with OSHA’s requirements to protect workers from health and safety hazards, including infectious diseases.’” (Via The Hill’s Alex Gangitano)  https://bit.ly/31wXmLJ

How many workers this will cover: Roughly 84 million employees in the private sector https://nyti.ms/3ELIAik

Total number of vaccinations administered in the U.S.: 425 million shots have been given.

Seven-day average of doses administered: An average of 1.13 million doses

It’s Thursday.  I’m Cate Martel with a quick recap of the morning and what’s coming up. Send comments, story ideas and events for our radar to cmartel@thehill.com  — and follow along on Twitter @CateMartel and Facebook.

Democrats are hitting the panic button after Tuesday’s weak performance in Virginia, worrying it is a preview of the 2022 midterms, reports The Hill’s Alexander Bolton. https://bit.ly/3EJe74v

Democrats hadn’t been worried about giving up the Senate: The map is more favorable towards Democrats.

But now they are: “Biden’s approval numbers have tanked amid a gridlocked Congress, and his dismal ratings were another anchor on McAuliffe in Virginia. It was also impossible not to interpret the tight race in New Jersey as reflective of broader problems.”

^Keep in mind: Republicans only need to flip a net of five seats to gain control of the House.

How both parties are reacting: https://bit.ly/3EJe74v

Via The Hill’s Amie Parnes and Morgan Chalfant, “Many expressed frustration at the gridlock on Capitol Hill.” https://bit.ly/3k3vuVG

For example: “Terry McAuliffe, the losing Democrat in Virginia, and his allies had pressed for the House to pass a Senate-approved bipartisan infrastructure bill months ago, believing it would help him. But that bill was stuck in a standoff between centrists and moderates over the broader Biden agenda.”

Mentioning 2010 is triggering for Dems: “For some Democrats, the results brought on a sense of déjà vu, drawing flashbacks to the 2009 governor’s contest in Virginia and the ‘shellacking’ — as former President Obama dubbed it — one year later in the 2010 midterm elections.”

How Tuesday’s results is causing a reality check for Democrats: https://bit.ly/3k3vuVG

Via The New York Times’s Shane Goldmacher, “Big Donors Financed Biden’s 2020 Run. Now They Get a Chilly Reception: Some of the top Democratic contributors have become increasingly frustrated with a lack of communication from the White House — and impatient with inaction on voting rights.” https://nyti.ms/31vHMQt

Via The Hill’s Niall Stanage, “Former President Trump hailed Republican Glenn Youngkin’s victory in Virginia as a triumph, but the more compelling case is that his fortunes took a hit from the gubernatorial race.” https://bit.ly/3bIIImd

Why this wasn’t necessarily a win for Trump: “Youngkin in defeating Democrat Terry McAuliffe has provided Republicans with a new template for victory. The blueprint doesn’t require repudiating the former president — but it doesn’t require kissing Trump’s ring, either.”

This is welcomed news to Republicans who don’t like Trump: From former Rep. Charles Dent (R-Pa.), a moderate who retired during Trump’s presidency: “Youngkin was stiff-arming Donald Trump . Youngkin won by ignoring Trump and appealing to swing voters in a more traditional, thoughtful way.”

From former speechwriter to President George W. Bush, Jean Card: “I do think there is a new template, and that’s why I’m excited, personally. I have been a Republican my entire adult life, but I did not vote for Trump. I thought he was a bad leader for the Republican Party; it made me worry about the future for the party. And now there is another way.”

What this means for the future of the Republican Party: https://bit.ly/3bIIImd

Via The Hill’s Alex Gangitano and Brett Samuels, “A poor night at the ballot box on Tuesday has left some Democrats questioning how best to move forward with President Biden’s spending plans and whether the party needs to refocus its agenda to win over voters.” https://bit.ly/2ZOUp8j

THIS A.M. — JOE MANCHIN SAYS DEMOCRATS CAN’T GO TOO FAR TO THE LEFT:

Lol, the implied exhaustion in this quote: 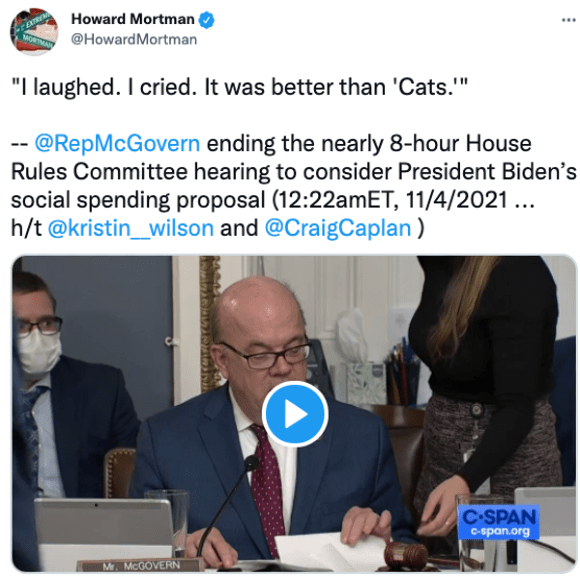 Getting traction — here’s why you keep seeing references to 12 gallons of milk: 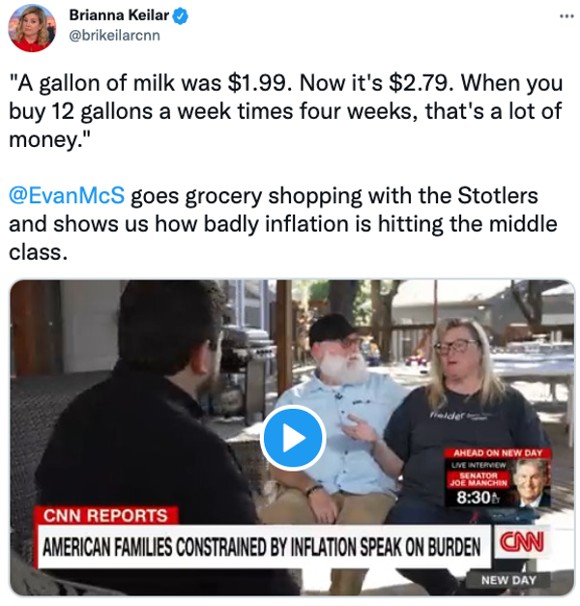 Check out some of the responses to this segment: https://bit.ly/3GR9wir

11 a.m. EDT: A cloture vote and a confirmation vote in the Senate. The Senate’s full agenda today: https://bit.ly/3BEu7D2

Today is National Candy Day! Though in my opinion, this should be on Nov. 1, the day that all Halloween candy is discounted at CVS. That’s the holiday.

And to brighten your afternoon, here’s a dog who got in a little over its head: https://bit.ly/3k84MLL