Could it be, dare I say it, INFRASTRUCTURE DAY?!:

The House has been in session since 8 a.m. ironing out the final details of President Biden’s $1.75 trillion social spending bill and climate package.

This could be THE DAY: House Democrats are planning to vote on the bipartisan infrastructure bill and the social spending bill today (!) https://bit.ly/3ELGvTF

Livestream of the House: https://bit.ly/3EKO25a

A few centrist Democratic lawmakers are now demanding to see a full Congressional Budget Office (CBO) score on the social spending bill before voting on the bills. https://bit.ly/3nZWx5I

Can they get that today?: Nope, it would not be ready today. The bill is 2,000 pages long.

Soo, what does this mean for today: That’s unclear. House Democrats can only afford three defections from their party to pass the bill.

So everything is a bit up in the air right now — again.

Oh boy: CNN’s Manu Raju tweeted a little after 8 a.m., “It’s going to be a long and slow-moving day in the House. Andy Biggs just forced a roll-call vote on a motion to adjourn the chamber.” https://bit.ly/31AeEYn

President Biden is basically begging: “I’m asking every House member, member of the House of Representatives, to vote yes on both these bills, right now. Send the infrastructure bill to my desk. Send the Build Back Better bill to the Senate.” (NBC’s Sahil Kapur) https://bit.ly/31nAXAf

Progressives think they should go for broke: Congressional Progressive Caucus Pramila Jayapal (D-Wash.) said she thinks it’s worth passing the mammoth bills even if that means Democrats risk losing the House in 2022.  In her words: “Of course it’s worth it if we’re making people’s lives better … part of what we have to do is really understand the economic frustration that people have right now. And I think that is really important for us.” https://bit.ly/3EMVLzB

Is what the House passes the ~final~ bill?: Haha, no way. “Every single lawmaker understands the BBB is going to get massively worked over by Senate (and the parliamentarian) and sent back to the House for final passage.” (NBC’s Garrett Haake) https://bit.ly/3GTI57R

^ That’s why this is an unusual holdup: Because the bill will almost certainly be tweaked and altered, NBC’s Haake adds, “Moderate D’s hung up on a CBO score at this stage seems a weirdly processy hill to die on.” https://bit.ly/3GTI57R 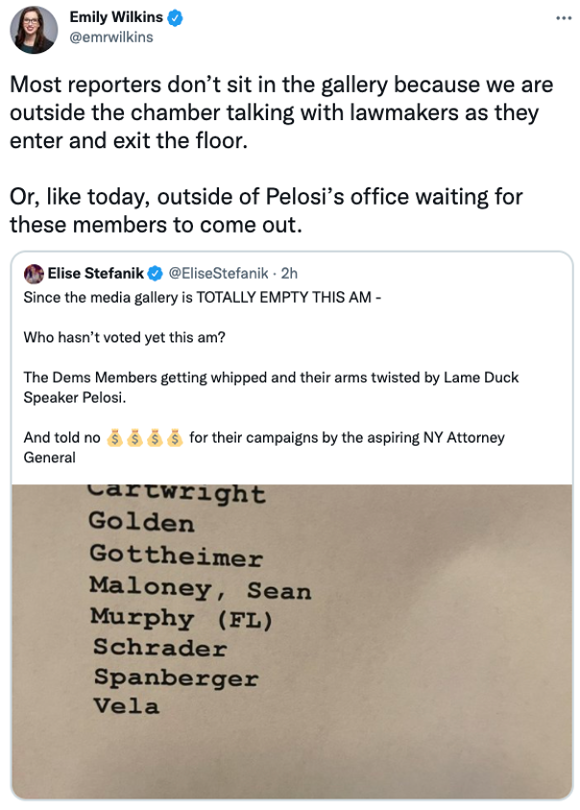 ^ Bloomberg’s Emily Wilkins added: “Also, Rep. Stefanik knows all this. So view her tweet in that context.” https://bit.ly/3o3Fyzg

INTERESTING CONTEXT TO THE BILL — THE WEALTHIEST AMERICANS GET A TAX CUT FROM DEMS:

Via The Daily Beast’s Sam Brodey, “If they’re lucky, Dems will pass a bill today that cuts taxes for rich people, after they promised—for years—to do the opposite of that. They admit this is ‘inherently contradictory.’ But they also admit they can’t stop it because, well, politics.” The full story:  https://bit.ly/3k9udMU

It’s a chilly Friday in D.C.! Sunday is the end of daylight savings, so don’t forget to change your clocks — and enjoy that extra hour of sleep 😉

I’m Cate Martel with a quick recap of the morning and what’s coming up. Send comments, story ideas and events for our radar to cmartel@thehill.com  — and follow along on Twitter @CateMartel  and  Facebook.

The U.S. added 531,000 jobs in October, as the delta COVID-19 variant surge that derailed the labor market has finally eased. https://bit.ly/3qaC94C

For context: Economists had expected a gain of roughly 450,000 jobs in October.

The unemployment rate: Dropped from 4.8 percent to 4.6 percent.

REACTIONS — HOW EACH SIDE IS SPINNING IT:

Via The Hill’s Sylvan Lane: “Democrats say the report shows the importance of beating the pandemic (that’s not false) and passing their agenda”

“GOPers say the job growth is in spite of Biden and his policies would make it worse. Some don’t acknowledge COVID/delta at all” https://bit.ly/3k4xNIj

BIDEN TOOK A BIT OF A VICTORY LAP THIS MORNING:

President Biden reacted to the news of the strong jobs report. “There’s a lot more to be done. We still have to tackle the costs that American families are facing, but his recovery is faster, stronger, and fairer and wider than almost anyone could have predicted.” (The Hill’s Morgan Chalfant) https://bit.ly/3ERbYDM

THE NUMBERS MAY NOT BE OUT OF THIS WORLD, BUT IT IS GREAT NEWS:

They’re still the dancing queeeeeens. Young and sweet, no longer 17:

Nearly 40 years since releasing their last album, ABBA is back and just released a new album (!)

ABBA posted a 2-minute 50-second video, “The Story Behind The Album”: Including what it was like to walk into the studio after 39 years. Watch:  https://bit.ly/2ZWaz0e

Via The New York Times’s Rebecca Robbins, “Pfizer announced on Friday that its pill to treat Covid-19 had been found in a key clinical trial to be highly effective at preventing severe illness among at-risk people who received the drug soon after they exhibited symptoms.”  https://nyti.ms/3nUegew

If this is sounding familiar to you: “The antiviral pill is the second of its kind to demonstrate efficacy against Covid. It appears to be more effective than a similar offering from Merck, which is awaiting federal authorization.”

Wow this is incredible if this is true: “Pfizer’s pill, which will be sold under the brand name Paxlovid, cut the risk of hospitalization or death by 89 percent when given within three days after the start of symptoms.”

Please be right about this, Scott:

In an interview with CNBC’s “Squawk Box” this morning, Pfizer board member and former Food and Drug Administration (FDA) commissioner Scott Gottlieb predicted that the end to the pandemic is in sight for the U.S. 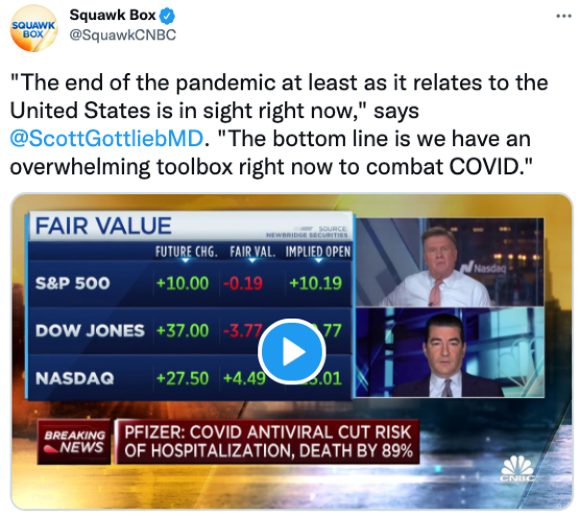 Gottlieb also put a lot of stock into the Jan. 6 vaccine mandate for businesses: “These mandates that are going to be put in place by Jan. 4 really are coming on the tail end of this pandemic. By Jan. 4, this pandemic may well be over, at least as it relates to the United States after we get through this delta wave of infection. And we’ll be in a more endemic phase of this virus.” https://bit.ly/3EMT1Cj

Total number of vaccinations administered in the U.S.: 425 million shots have been given.

‘Everybody get up it’s time to slam now … welcome to the Space Jam!’:

Via The Hill’s Brett Samuels, during Vice President Harris’s trip to NASA’s Maryland campus this afternoon, she is expected to announce the first meeting of the National Space Council will happen on Dec. 1. https://bit.ly/3o4pw8g

*Tries to hold in a laugh*: 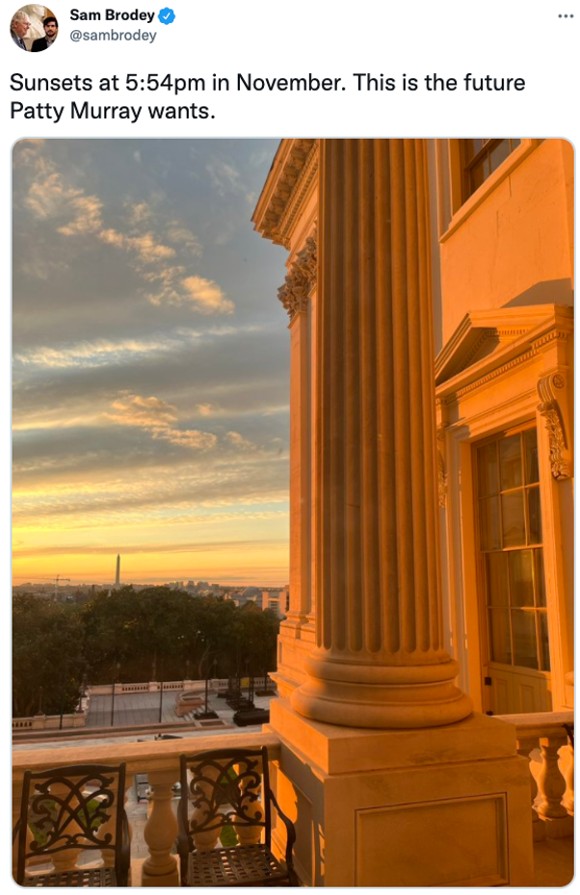 The House is in. The Senate is out. President Biden and Vice President Harris are in Washington, D.C.

And to get your weekend off to a great start, here’s a puppy who is SO ready for the game: https://bit.ly/3H3TiD0

^ Make sure your sound is on.