Three US presidents have nominated him, no big deal:

Who will be Powell’s deputy?: Fed Governor Lael Brainard, a Democrat, who is a popular choice among liberals.

More on the announcement, via The Hill’s Sylvan Lane: https://bit.ly/3oTvp8C

WHY THIS IS A PARTICULARLY IMPORTANT TIME FOR THE FEDERAL RESERVE:

Via The New York Times’s Jeanna Smialek, “Inflation has picked up sharply this year, with consumer prices increasing at the fastest pace in more than three decades in the year through October. The central bank is tasked with keeping consumer prices stable while striving for maximum employment, and striking that balance could require difficult policy choices in the months ahead.” https://nyti.ms/3Fxpg8W

It’s Monday of the holiday week! Get those stretchy pants ready! I’m Cate Martel with a quick recap of the morning and what’s coming up. Send comments, story ideas and events for our radar to cmartel@thehill.com — and follow along on Twitter @CateMartel and Facebook.

Everyone is bracing for Black Friday:

Via The Hill’s Alex Gangitano and Sylvan Lane, “Black Friday this week will kick off a crucial stretch for President Biden as the U.S. economy struggles to shake off the limits of the coronavirus pandemic.” https://bit.ly/3HJBqNP

“COVID-19 stifled the regular economic boost of the holiday season in 2020, but retailers and manufacturers are bracing for a surge of shopping and travel after three straight months of growing pressure on supply lines.”

What to expect: “Retail sales minus automobiles and gasoline during Thanksgiving week are expected to rise 10 percent from last year and 12.2 percent from 2019, according to data from Mastercard. The credit card company is projecting a 56 percent increase in apparel sales, a 40.2 percent jump in department stores sales, roughly 30 percent more spending on electronics and a nearly 40 percent increase in jewelry sales from the same time last year.”

Why the stakes are so high for Biden: https://bit.ly/3HJBqNP

BEFORE THE ANNOUNCEMENT, THERE WAS SPECULATION THAT POWELL COULD BE REPLACED:

Senate Democrats are panicking a bit:

Via The Hill’s Alexander Bolton, “Senate Democrats are growing alarmed about bad polling numbers and are looking for a better strategy for selling President Biden’s climate and social spending agenda, which Republicans are attacking as a far-left tax and spending spree.” https://bit.ly/3oTWyZl

Another worry for Democrats: “The party also feels that it is getting killed politically by Republicans on culture war issues after Democrats lost the Virginia gubernatorial contest, which hinged in part on critical race theory.”

How they are looking to change the narrative: “Senate Democratic Steering Committee Chairwoman Amy Klobuchar (D-Minn.) organized a meeting with Democratic pollsters on Wednesday to review the surprisingly strong Republican performances in Virginia and New Jersey. One person familiar with the meeting said the message from some of the pollsters was an alarming wake-up call.”

Where do they go from here?: https://bit.ly/3oTWyZl

Via The Washington Post, “Five people were killed and more than 40 were injured after a driver in an SUV plowed through a Christmas parade in Waukesha, Wis., on Sunday, officials said — a violent end to the otherwise festive scene where children were dancing in the street and a marching band played ‘Jingle Bells.’ ” https://wapo.st/3oTJoLE

Who is responsible?: One person has been taken into custody.

“[Waukesha Police Chief Dan Thompson] said the investigation was still ‘very fluid’ and that it was ‘unknown at this time whether the incident has any nexus to terrorism.’ He did not comment on a possible motive.”

What we know so far: https://wapo.st/3oTJoLE

A SCENARIO INVESTIGATORS ARE LOOKING INTO:

Via The Associated Press’s Scott Bauer, Michael Balsamo and Mike Householder, investigators are looking into whether the suspect was fleeing another crime. https://yhoo.it/3FBn00v

Get a vax, leave the mask:

In an interview on CNN’s “State of the Union,” yesterday, Anthony Fauci said vaccinated families can “absolutely” spend the holidays together without wearing a mask. https://bit.ly/3FBnALJ

In Fauci’s words: “That’s what I’m going to do with my family. And that’s what I think people should do.

“Another roughly 5 percent are in compliance by having a valid exception or an extension request, a senior administration official said, bringing the total to 95 percent in compliance.” https://bit.ly/3kYqmmv

Total number of vaccinations administered in the U.S.: 451 million shots have been given.

Seven-day average of doses administered: An average of 1.45 million doses

You know, I’ve never seen this photo before: 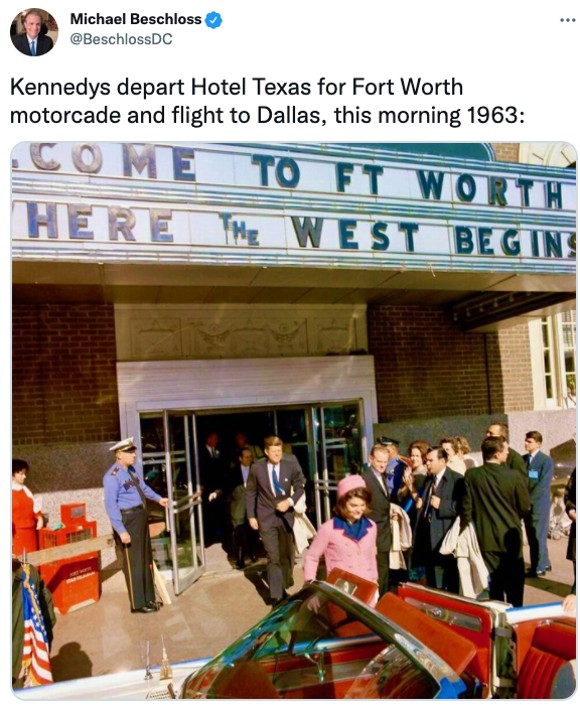 The moment the nation froze: 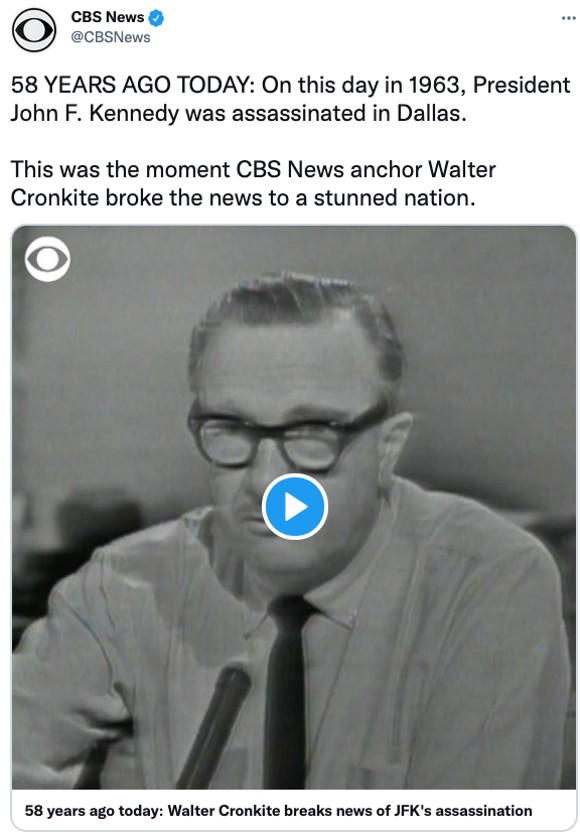 I hope she ordered the French onion soup: 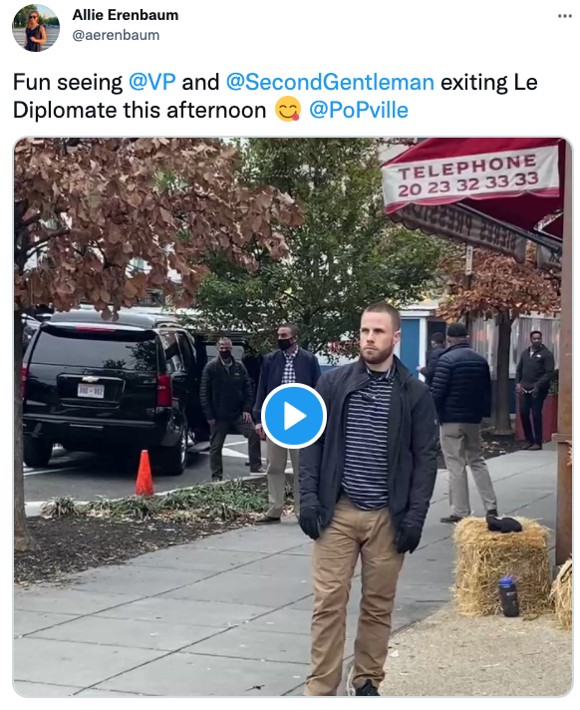 The House and Senate are out. President Biden and Vice President Harris are in Washington, D.C. Biden is heading to North Carolina this afternoon.

Via CNN, Ann Turner Cook, who modeled as the original Gerber baby in 1928, just turned 95 years old (!) Photo — do you see the resemblance?: https://cnn.it/3kYstGU

And because you read this far on Monday, here’s an otter who is absolutely fascinated by a hot air balloon: https://bit.ly/3HHRHD2