Get vaccinated and cross your fingers (and toes!):

The U.S. is bracing for the COVID-19 omicron variant to inevitably spread throughout the nation after it has been detected in more than a dozen countries.

Do the current vaccines protect against the variant?: We don’t know yet, but it’s likely it will offer at least some protection.

How long until we know?: About two weeks.

Is there anything we can do in the meantime?: Get vaccinated and boosted. President Biden also recommended that people wear masks in indoor public settings, though he did not call for mask mandates.

Who is eligible for a booster? Every American adult: All Americans 18 and up are eligible for a COVID-19 booster. Yes, but: “Data from the Centers for Disease Control and Prevention shows 80 percent of fully vaccinated people have not received one yet.”

Should we expect more lockdowns?: Not at this point. During Biden’s remarks yesterday, he emphasized vaccines, not lockdowns.

More on what to expect, via The Hill’s Peter Sullivan: https://bit.ly/3EbckVZ

THIS PARTICULAR VARIANT IS FASCINATING FOR SCIENTISTS:

Via The Washington Post’s Joel Achenbach, “When the variant now known as omicron first appeared … scientists were stunned. This was the weirdest creature they’d seen to date. It had an unruly swarm of mutations. Many were known to be problematic. … But there had never been a variant with so many of these mutations gathered in a package.” https://wapo.st/3d3RzQd

From Texas A&M University virologist Benjamin Neuman: “We have seen these mutations in other strains, in twos and threes, and each time they were a little harder to neutralize, but didn’t spread particularly well. Now, all together? It’s a complete black box.”

OMICRON WAS ALREADY IN EUROPE BEFORE THE FLIGHT BANS:

Why the timing matters: “It suggests that the variant was already present in the country for at least a week before the arrival of two flights from South Africa on Friday, and before the World Health Organization labeled Omicron a ‘variant of concern.’ ”

Via The Hill’s Niall Stanage: https://bit.ly/3xFnikn

“The Biden administration is facing heavy criticism for its decision to impose a travel ban on South Africa and several nearby countries in the wake of the omicron variant, reigniting a debate from some of the earliest days of the pandemic.” More from The Hill’s Nathaniel Weixel: https://bit.ly/3D8gZqx

Total number of vaccinations administered in the U.S.: 454 million shots have been given.

Seven-day average of doses administered: An average of 1.85 million doses

It’s Tuesday and the last day of November! I’m Cate Martel with a quick recap of the morning and what’s coming up. Send comments, story ideas and events for our radar to cmartel@thehill.com — and follow along on Twitter @CateMartel and Facebook.

Via The Hill’s Rebecca Beitsch, “Former Trump White House chief of staff Mark Meadows has reached an initial deal to cooperate with the House committee investigating the Jan. 6 attack on the Capitol, providing documents and agreeing to testify before the panel.” https://bit.ly/319xJQR

Timing: “The tenuous agreement comes as the committee announced Monday that it will hold a vote later this week to censure former DOJ attorney Jeffrey Clark after he failed to cooperate with the committee.”

Just chat, they said. Talk it through and you’ll both feel better, they said.:

^ Leaving the GOP scrambling: Via The Hill’s Cristina Marcos: https://bit.ly/3d6pZlf

Some wildly inappropriate comments started the controversy: During an event, Boebert recalled getting into a Capitol elevator when a Capitol Hill police officer ran over.

In Boebert’s words: “I look to my left and there she is, Ilhan Omar, and I said, ‘Well she doesn’t have a backpack, we should be fine.’ So we only had one floor to go and I say, do I say it or do I not? And I look over and I say, ‘Look, the jihad squad decided to show up for work today.’ Don’t worry, it’s just her staffers on Twitter that talk for her. She’s not tough in person.” Watch Boebert’s full comments: https://bit.ly/3o39OLT

More from the encounter, from CNN’s Andrew Kaczynski: https://cnn.it/3xBA7Mm

Boebert then apologized for the comments: She tweeted, “I apologize to anyone in the Muslim community I offended with my comment about Rep. Omar. I have reached out to her office to speak with her directly. There are plenty of policy differences to focus on without this unnecessary distraction.” https://bit.ly/3o4Y5wu

^ SO THE TWO SPOKE ON THE PHONE YESTERDAY — AND LET’S JUST SAY, IT DIDN’T GO WELL:

It ended with Omar hanging up on Boebert.

Omar’s account: “Instead of apologizing for her Islamophobic comments and fabricated lies, Representative Boebert refused to publicly acknowledge her hurtful and dangerous comments. She instead doubled down on her rhetoric, and I decided to end the unproductive call.” Omar’s full statement: https://bit.ly/3d6hEOt

Boebert posted a video after the call: “I told Ilhan Omar that she should make a public apology to the American people for her anti-American, antisemitic, anti-police rhetoric. She continued to press, and I continued to press back.” Watch her full response on Instagram: https://bit.ly/3o7MWuU

Via The Hill’s Alexander Bolton, congressional leaders are entering December with two monumental tasks: avoid a government shutdown at the end of the week and raise the debt limit before Dec. 15. https://bit.ly/3E8k7nB

Where government funding stands — no one is really stressing: “Democratic and Republican aides predict the short-term funding measure, which would last until Jan. 21 or Jan. 28, will pass relatively easily by the end of the week.”

The debt limit is a slightly trickier challenge: “Some budget experts have speculated that the Treasury Department might have flexibility to push the expiration of the debt limit until January or February.”

How this could play out: https://bit.ly/3E8k7nB

Via Politico’s Kyle Cheney and Josh Gerstein, “Three federal appeals judges are set to hear arguments Tuesday in a case that could determine whether Jan. 6 investigators can piece together Donald Trump’s mindset and movements as a mob of his supporters attacked the Capitol.” https://politi.co/3d1D7rU

Keep in mind: “House investigators are attempting to obtain a voluminous batch of documents concerning Trump’s meetings, call records and decisions in the weeks preceding the riot — documents they say are essential both to understanding how Trump tried to subvert the 2020 election and to preventing new threats to the transfer of power.”

Watch live — here’s a livestream of the arguments: https://bit.ly/3D7w0ZE 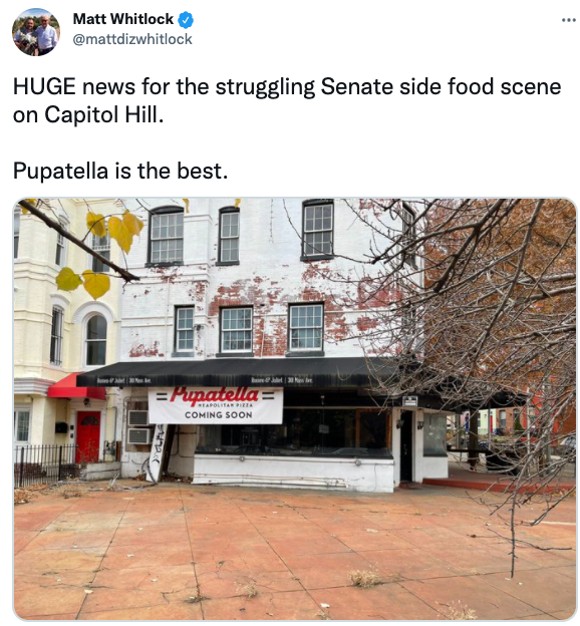 Well, this is adorable: 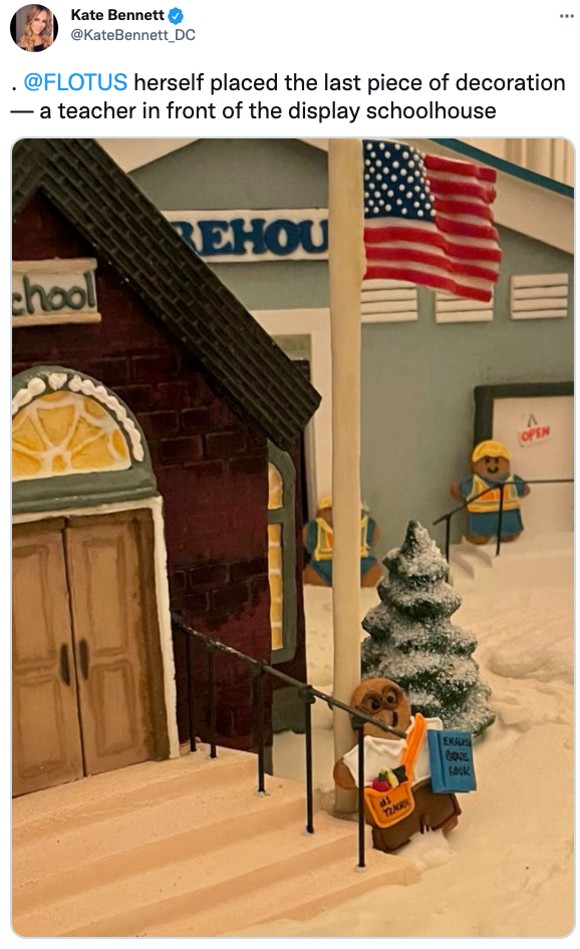 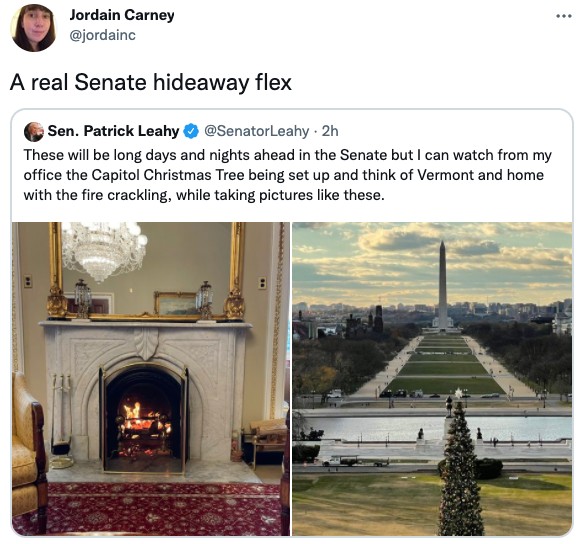 The House and Senate are in. President Biden is in Minnesota this afternoon. Vice President Harris is in Washington, D.C.

10 a.m. EST: Vice President Harris participated in a virtual rally for the Build Back Better Act.

4:30 p.m. EST: President Biden delivers remarks on the bipartisan infrastructure law and how it will improve the supply chain. Livestream: https://bit.ly/3D7UqlC

And because you read this far, here’s a high-tech cat launching pad: https://bit.ly/3CZc62N