How does everyone feel about a fourth vaccine dose?:

Via The New York Times’s Isabel Kershner, “An Israeli hospital on Monday began a study to test the safety and effectiveness of a fourth dose of a COVID-19 vaccine, as health officials continued to deliberate over rolling out fourth shots for vulnerable people nationwide.” https://nyti.ms/3FzsusS

Why this is noteworthy: Israel was an early leader in COVID-19 vaccinations and has been closely watched by other countries.

What we know about a potential fourth dose: https://nyti.ms/3FzsusS

HOW THE TEST IS BEING CONDUCTED — 150 PEOPLE HAVE BEEN GIVEN ANOTHER DOSE:

Via The Associated Press, “The trial began at Sheba Medical Center, outside Tel Aviv, with 150 medical personnel who received a booster dose in August receiving a fourth shot of the Pfizer/BioNTech vaccine. The staff receiving the additional dose were tested and found to have low antibody levels.” https://bit.ly/315jDAq

TONS of flights have been canceled:

Via USA Today’s John Bacon, Christal Hayes and Celina Tebor, “More than 7,300 flights were delayed or canceled across the nation Sunday amid the latest omicron-driven coronavirus surge.” https://bit.ly/310HOzN

Specifically: “About 1,400 flights entering, leaving or flying within the United States were canceled and about 5,900 were delayed Sunday, according to the tracking website FlightAware.”

And on Christmas Day: “More than 4,000 flights were delayed or canceled Christmas Day as days of scheduling nightmares left holiday travelers scrambling.”

So far today, 989 flights within, into or out of the United States have been canceled. The numbers from Flight Aware: https://bit.ly/32GqBvV

TIDBIT — WHAT FAUCI THINKS ABOUT A VACCINE MANDATE FOR DOMESTIC AIR TRAVEL:

“Anything that could get people more vaccinated would be welcome,” Anthony Fauci, the nation’s leading infectious diseases expert, responded on ABC’s “This Week” when asked about a COVID-19 vaccine mandate for domestic flights. https://bit.ly/3Fz2oqb

It’s Monday. I hope you all had a very Merry Christmas! I’m Cate Martel with a quick recap of the morning and what’s coming up. Send comments, story ideas and events for our radar to cmartel@thehill.com — and follow along on Twitter @CateMartel and Facebook.

PROGRAMMING NOTE: This is the last 2021 edition of The Hill’s 12:30 Report! Enjoy the holiday week and get some rest! We will be back on Monday, Jan. 3. Same time. Same place.

Via The Hill’s Tal Axelrod, “With less than a year to go until the 2022 midterms, Republicans are increasingly bullish on the prospect of a red wave that could flip both chambers of Congress and end Democrats’ unified control in Washington.” https://bit.ly/3EsJGPv

How so — it is a pretty rough situation for Dems: “Democrats find themselves on their back foot, defending their narrow House and Senate majorities – and President Biden — against a fusillade of attacks over stubbornly high coronavirus cases, inflation, the bloody Afghanistan withdrawal and more. Biden’s approval ratings have nosedived to the low 40s, portending a possible drumming at the ballot box next year — and they haven’t stopped falling.”

What could potentially happen: https://bit.ly/3EsJGPv

‘10 RACES THAT WILL DECIDE THE SENATE MAJORITY’:

Via The Hill’s Max Greenwood: https://bit.ly/3eyzgDj

Via The Washington Post’s Bryan Pietsch and Annabelle Timsit, “Coronavirus cases are being reported at record levels across the world — surpassing even last winter’s devastating peak in some places — as officials grapple with a surge caused by the omicron variant.” https://wapo.st/3euW6vE

Where the U.S. stands: “The seven-day average of new daily cases was more than 203,000 on Sunday, according to a Washington Post tally, a level not seen since Jan. 19 last year. U.S. health officials warn that the country could soon see more than 1 million new cases per day, far beyond last winter’s peak of 248,000.”

More on where we stand: https://wapo.st/3euW6vE

THE CORONAVIRUS CAN STAY IN YOUR BODY FOR MONTHS, ACCORDING TO A NEW STUDY:

Total number of vaccinations administered in the U.S.: 500 million shots have been given.

Seven-day average of doses administered: An average of 1.13 million doses

Gun control advocates are not thrilled with Biden:

Via The Hill’s Alex Gangitano, “Gun violence prevention advocates were hopeful a year ago that the Biden presidency would make progress on gun control. Instead, as his first year in office draws to an end, they are feeling disappointed.” https://bit.ly/3z3zKLf

What the Biden administration has done so far: “Like his predecessors, Biden has issued executive orders on gun violence prevention while legislation to expand background checks has failed in the Senate.” 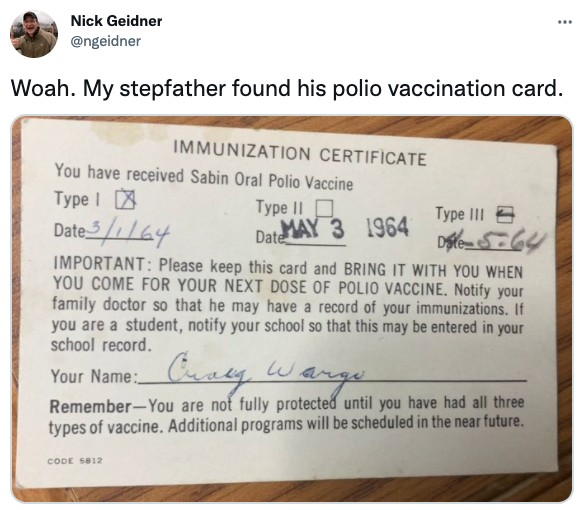 Sen. Grassley’s vacuum Beth came out to play this weekend: 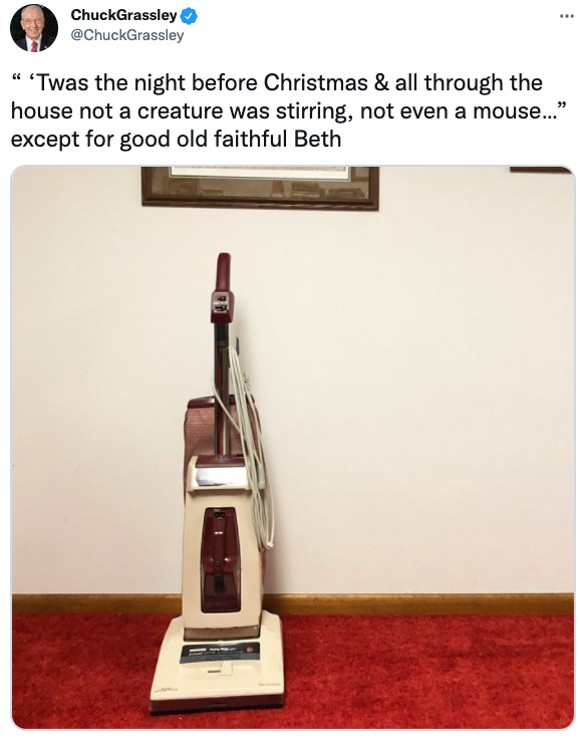 Tidbit — FLOTUS and her FLOTUS-themed tree!: 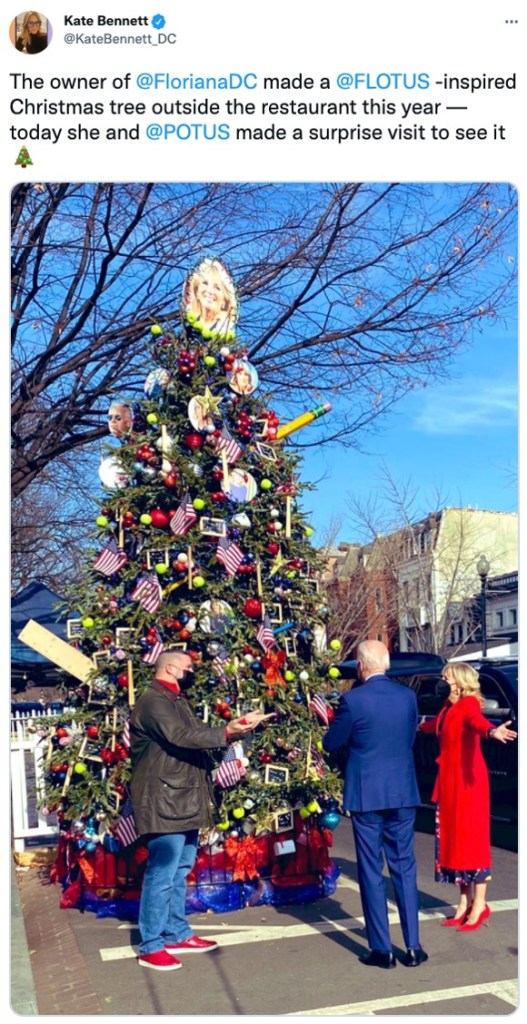 The House and Senate are out. President Biden is on his way to Rehoboth, Del.

This is pretty cool:

On Christmas, a family in Virginia moved into their new 3D-printed house built by Habitat for Humanity. https://cnn.it/3pwji33

This is a pretty cool stat: “The technology allowed the home to be built in just 12 hours, which saves about four weeks of construction time for a typical home.”

And because it’s a holiday week and you hopefully just came here for a cute animal video, I would like for you to meet Finn. Finn loves to drop his toys into the bath.

Here is a running list of the items Finn has dropped: https://bit.ly/3mkHKCE