The Hill’s 12:30 Report: Djokovic may not compete in French Open over vaccine requirement

Djokovic could ALSO be barred from the French Open:

Via Reuters, Tennis star Novak Djokovic, who was deported from Australia over the weekend over his unvaccinated status, may also be barred from competing in the French Open. https://es.pn/3GBEefh

How we know: “France’s vaccine pass law, approved by parliament on Sunday, will require people to have a certificate of vaccination to enter public places such as sports venues, restaurants, cafes, cinemas and long-distance trains.”

Novak Djokovic just returned to his home country, Serbia, after losing his Australian visa to compete in the Australian Open.

When he landed: He was greeted by fans, according to CNN. https://cnn.it/3qAGWMs

‘AN UNPLAYED AUSTRALIAN OPEN IS A TURNING POINT FOR NOVAK DJOKOVIC’:

Via The New York Times’s Christopher Clarey, “Djokovic has rebounded from demoralizing periods in the past, but talented players are coming behind him, and his anti-vaccine stance has made him a global target.” https://nyti.ms/3tvUkmV

It’s Monday — today is Martin Luther King Jr. Day! I’m Cate Martel with a quick recap of the morning and what’s coming up. Send comments, story ideas and events for our radar to cmartel@thehill.com — and follow along on Twitter @CateMartel and Facebook.

Four Florida Republicans could be fighting for the GOP presidential nomination in 2024. FOUR!:

Via The Hill’s Max Greenwood, “Florida is emerging as the epicenter of the early fight for the GOP presidential nomination as speculation grows about the possibility of as many as four Republicans from the Sunshine State pursuing the party’s nod in 2024.” https://bit.ly/3txcbKb

Besides the internal Republican bloodbath it could cause in the state: “[It] also underscores the extent to which the Sunshine State has become a hub for the conservative movement in recent years.”

How the dynamic will change if Trump does or doesn’t run: https://bit.ly/3txcbKb

Interesting read — ‘Who Is King of Florida? Tensions Rise Between Trump and a Former Acolyte’:

Via The New York Times’s Jonathan Martin and Maggie Haberman, “For months, former President Donald J. Trump has been grumbling quietly to friends and visitors to his Palm Beach mansion about a rival Republican power center in another Florida mansion, some 400 miles to the north.” https://nyti.ms/3Ifu586

“Gov. Ron DeSantis, a man Mr. Trump believes he put on the map, has been acting far less like an acolyte and more like a future competitor, Mr. Trump complains. With his stock rising fast in the party, the governor has conspicuously refrained from saying he would stand aside if Mr. Trump runs for the Republican nomination for president in 2024.”

What started this feud: COVID-19 policies.

More on the tension between Trump and DeSantis: https://nyti.ms/3Ifu586 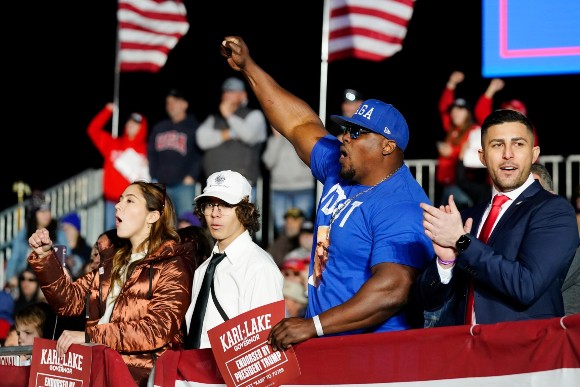 “But for the thousands of his most faithful followers — some of whom traveled to the rally site at Canyon Moon Ranch from neighboring states — it was a chance to imagine and push for the former president’s own attempt to regain office. Attendees called for Trump to run again in 2024. Many doubted he was truly ousted from the White House in the first place.”

The full story and photos from the rally: https://politi.co/33Lye53

This is a pretty remarkable turnout for a former president: https://bit.ly/33JGu5f

Traveling in style: The Daily Mail’s Nikki Schwab tweeted, “This is apparently how Trump gets around these days.” Photos of a helicopter passing over: https://bit.ly/3Al00Sd

What a horrible situation in Texas:

Via CNN, “The FBI on Sunday identified Malik Faisal Akram, a 44-year-old British national, as the man who held four people hostage at a Texas synagogue in an hours-long standoff Saturday before a rescue team entered the building and killed the suspect.” https://cnn.it/3tACeQO

What we know: Via The New York Times’s Melina Delkic: https://nyti.ms/3GFJVc6

Is this the final wave? TBD: 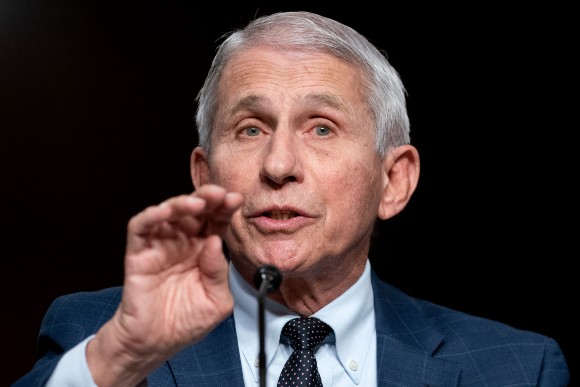 Via CNBC’s Karen Gilchrist, “White House chief medical advisor Dr. Anthony Fauci said Monday it is still too soon to predict whether the omicron Covid-19 variant will mark the final wave of the coronavirus pandemic.” https://cnb.cx/3txrIJZ

If it is the end of the pandemic, then what happens?: “[Even] if omicron does emerge as the final variant of COVID-19, it is unlikely that it would mean endgame for the virus entirely, Fauci said. Rather, it will remain present in society at an endemic level.”

Total number of vaccinations administered in the U.S.: 527 million shots have been given.

Seven-day average of doses administered: An average of 1.33 million doses

*Runs from a far distance* Did someone say ‘one-pound mozzarella stick?!:

NJ.com posted a photo of a single mozzarella stick that weighs one pound. Photo of the beautiful creation — of course it’s sprinkled with more cheese: https://bit.ly/3Kl8g96

The Bidens stopped by a food bank this weekend: 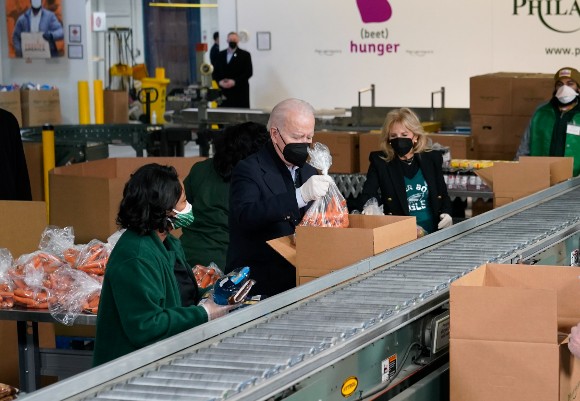 More on the stop: https://abcn.ws/3GEvh4D

The House and Senate are out. President Biden is in Delaware. Vice President Harris is in Washington, D.C.

And to brighten your afternoon, here’s a dog who is not a fan of the singing: https://bit.ly/3fuS5rE