Imagine dropping your favorite food on the ground. It has spilled everywhere, but it’s too good to just leave there. So, you pick up whatever pieces you can.

That is the Democratic Party right now:

Via The Hill’s Alexander Bolton, “In the wake of a failed effort to pass voting rights legislation, Democrats are turning their attention back to reviving President Biden’s stalled Build Back Better Act, which hit a wall in December when Sen. Joe Manchin (D-W.Va.) announced he couldn’t support it.” https://bit.ly/33z2y38

The progress made this week: “Biden gave the legislation new momentum this week when he announced he’s willing to sign whatever ‘chunks’ of the climate and social spending bill can get through Congress.”

From a Democratic senator: “I think we should tell Sen. Manchin, ‘You won, write the bill and tell us what you can support.’ That way he would stop dancing around.”

Where Manchin stands — *pulls out a blank piece of paper*: “Manchin on Thursday told reporters that he’s ready to rip up the Build Back Better Act. ‘We’re going to start with a clean sheet of paper and start over,’ he said.”

A LIGHTER TIDBIT — WHAT BETTER WAY TO DRESS UP A BILL THAN A SHINY, NEW NAME?:

The Wall Street Journal’s Andy Duehren tweeted, “’We may have to rename it,’ [Speaker Nancy Pelosi (D-Calif.)] says of BBB.” https://bit.ly/3fN4kzS

So, naturally, Twitter users had a lot of fun with this quote. Here are some of my favorites:

From The Economist’s Steven Mazie: “Build Back Betterer” https://bit.ly/3AhSgjK

I could go on for hours, but I should probably get on with the news. Here are more ideas for what to rename it: https://bit.ly/3Amnje9

Happy Friday of what feels like a never-ending month (!) I’m Cate Martel with a quick recap of the morning and what’s coming up. Send comments, story ideas and events for our radar to cmartel@thehill.com — and follow along on Twitter @CateMartel and Facebook.

Via CNN’s Melissa Alonso, “Meat Loaf, the larger-than-life singer whose bombastic rock opera ‘Bat Out of Hell’ is one of the best-selling albums of all time, has died at age 74, according to a statement on his verified Facebook page.”

Some of the tributes to Meat Loaf: https://cnn.it/3ImTtJm

GBH Archives tweeted, “Meat Loaf auctioned picture discs of his album Bat Out of Hell (along with Dale Dorman of WVBF) as a fundraiser for @GBH in 1978.” Watch: https://bit.ly/35bUOV7

A weekend for rallies:

Sunday: 20,000 people are expected to protest vaccine mandates in a Washington, D.C., rally this weekend. Robert F. Kennedy Jr. is expected to speak. Details and what to expect: https://bit.ly/3nMeXHI

Hey, an election-related bill that GOP leaders and Biden both like:

Via The Hill’s Jordain Carney, “Momentum is growing for making changes to an archaic election law after former President Trump and his allies tried to overturn the Electoral College results.” https://bit.ly/3rACX1v

Timing: As Democratic leaders were working on the failed voting rights bills, reforms to the Electoral Count Act have been quietly discussed for weeks.

Do we know what the proposal would do?: “The group’s talks are still in the early stages, with staff-level talks also happening. They don’t yet have a proposal and aren’t publicly putting a timeline on when they’ll get there. Instead, members have exchanged ideas on what they wanted included in potential legislation.”

Pretty please with a cherry on top: 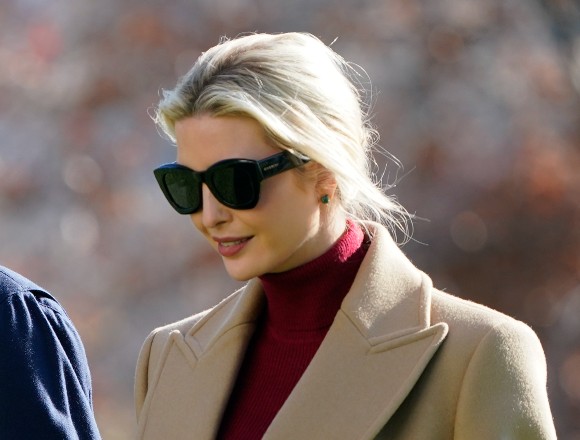 Via The Hill’s Rebecca Beitsch, the House select committee investigating the Jan. 6, 2021 attack on the U.S. Capitol has asked former President Trump’s daughter, Ivanka Trump, to voluntarily meet with them. https://bit.ly/3fICJ35

Why this is noteworthy: It’s the first official request for a member of the Trump family.

What the select committee wants to discuss — excerpt from the letter to Trump: “The Select Committee wishes to discuss the part of the conversation you observed between President Trump and Vice President Mike Pence on the morning of January 6th. Similarly, the Select Committee would like to discuss any other conversations you may have witnessed or participated in regarding the president’s plan to obstruct or impede the counting of electoral votes.”

Has Ivanka Trump responded?: Nope, not yet.

NEW — THE COMMITTEE HAS A LOT OF TRUMP WHITE HOUSE FILES:

Politico’s Kyle Cheney tweeted, “The Jan. 6 committee now has more than 750 pages of Trump White House files that the former president tried to shield from investigators.” What we know: https://bit.ly/3fLJEbE

Wow — ‘CDC: Unvaccinated seniors 50 times more likely to be hospitalized than those with boosters’:

Via The Hill’s Lexi Lonas, “Adults ages 65 and older who are not vaccinated against COVID-19 are nearly 50 times more likely to be hospitalized than seniors who have received a full vaccine course and a booster shot, according to data released by the Centers for Disease Control and Prevention (CDC).” https://bit.ly/3AlBMH9

See for yourself — here’s the data: https://bit.ly/3AoDFmK

‘Covid Hospitalizations Plateau in Some Parts of the US, While a Crisis Remains in Others’:

Via The New York Times’s Lauren Leatherby and Albert Sun, “Fewer people in the United States are being admitted to hospitals with the coronavirus than a week ago, suggesting that the record-breaking surge in hospitalizations driven by the Omicron variant could soon decline, following recent case trends. But the country remains far from the end of the Omicron wave, and in many areas it could be weeks before the strain on hospitals subsides.”

Graphics of where we stand with hospitalizations: https://nyti.ms/33EyMdc

Total number of vaccinations administered in the U.S.: 532 million shots have been given.

Twitter user @panoparker tweeted a photo of bathroom sinks made from Le Creuset Dutch ovens. The tweet has more than 64,000 likes so far. Photo: https://bit.ly/33F0PJx

This footage is still so surreal: 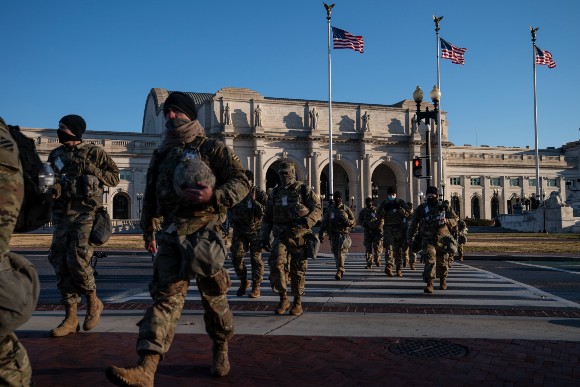 Yesterday, CNN’s Manu Raju tweeted a video of the military troops in Washington, D.C., for last year’s inauguration. Watch — it is still so chilling to see: https://bit.ly/3FTNAl3

The snowy owl decided to pop by the Senate office buildings:

NBC’s Frank Thorp V tweeted a video of the owl: “it is currently flying between the Dirksen and Hart Senate office buildings” Video: https://bit.ly/33SW5j9

The Senate is out. The House is meeting for a pro forma session. President Biden is in Washington, D.C., and is leaving for Camp David this afternoon. Vice President Harris is in California today.

Are we sure that’s necessary? *nervously chuckles to fill the dead air*:

Other top Netflix shows with new seasons coming soon: “[co-CEO and chief content officer Ted Sarandos] called out ‘Bridgerton,’ the second most-viewed Netflix original TV show, with the Season 2 set to bow in March, and ‘Stranger Things,’ with Season 4 slated for this summer.”

And to get your weekend off to a good start, here’s a dog who works for the TSA. It’s his last day before retirement and he has one last bag to sniff: https://bit.ly/33EDebJ