Pedal to the metal. I want to see you hustling!:

Via The Hill’s Alexander Bolton, “Democrats on the Senate Judiciary Committee are urging President Biden to speed up his process for picking a nominee to the Supreme Court so that nothing is left to chance in a 50-50 Senate where one medical emergency is already putting a strain on the Democrats’ narrow majority.” https://bit.ly/3LAoiwE

Do Democrats have a strong preference on who Biden selects?: Not really. They seem to like all the names that have been floated. They’re more concerned about the time frame.

Better! He said he is planning to return to work “in just a few short weeks.”

In his words: “I’m proud to report then I’ll be back on the floor of the United States Senate in just a few short weeks to vote on important legislation, and to consider a Supreme Court nominee.” https://bit.ly/3JvZSCF

WHAT ELSE IS HAPPENING ON CAPITOL HILL THIS WEEK:

–  A confirmation fight for Robert Califf to lead the Food and Drug Administration (FDA).

–  The Senate will work on postal reform.

Context and details for each from The Hill’s Jordain Carney: https://bit.ly/3JshK17

It’s Monday — Happy Valentine’s Day! I’m Cate Martel with a quick recap of the morning and what’s coming up. Send comments, story ideas and events for our radar to cmartel@thehill.com — and follow along on Twitter @CateMartel  and Facebook.

Washington, D.C., Mayor Muriel Bowser (D) announced that the city will end its requirement for people entering businesses to show proof of vaccination starting this week and will lift its mask mandate for businesses starting on March 1. https://bit.ly/34Veext

Via The New York Times’s Anton Troianovski, Marc Santora and Christopher F. Schuetze, “Even with Russian warships massing off Ukraine’s Black Sea coast and the United States warning that Russian ground forces are poised to strike from multiple directions, Russia’s top diplomat said on Monday that the possibility for a diplomatic resolution to the crisis was ‘far from exhausted.’ ” https://nyti.ms/3sYi9C3

WHAT WE KNOW ABOUT TIMING FOR A POSSIBLE RUSSIAN INVASION OF UKRAINE:

It could happen “any day now,” according to national security adviser Jake Sullivan. 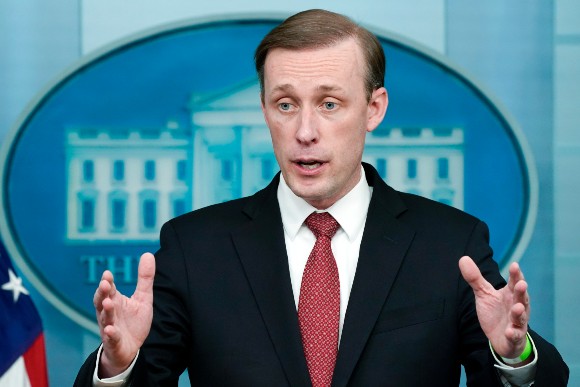 More from Sullivan’s appearance on CNN’s “State of the Union:” https://cnn.it/3HRvG4e

TIDBIT — THIS TABLE COULD DOUBLE AS AN OLYMPIC CURLING RINK:

Financial Times’s Max Seddon tweeted, “[Russian Foreign Minister Sergei Lavrov] reporting to [Russian President Vladimir Putin] on Russia’s quest to get western countries to agree to its security demands. Look how long the table is!” Photo of the table: https://bit.ly/3v4kE8z

The bridge is back open!:

Via The Associated Press’s Rob Gillies and Corey Williams, “The busiest U.S.-Canada border crossing, meanwhile, was open again Monday after police removed the last of the protesters who had bottled up the Ambassador Bridge for nearly a week in a demonstration against Canada’s virus restrictions.” https://bit.ly/3oNy2d5

Does that mean the protests are over?: Nope, “a larger protest in the capital, Ottawa, [persists] as city residents seethed over authorities’ inability to reclaim the streets.” 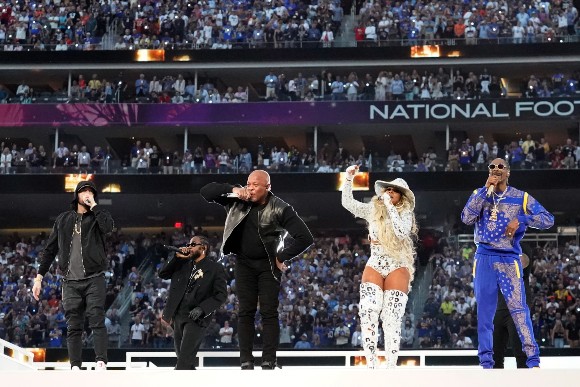 Tell us your age without telling us your age: The Washington Post’s Matt Viser tweeted, “That halftime show was made for those who recognize these items.” Photo of the items in question: https://bit.ly/3uSRzN0

I’ve seen this tweet passed around quite a bit: NBC’s Garrett Haake tweeted, “If you knew all the words to that halftime show performance, it’s probably time to start getting ready for bed.” https://bit.ly/3GSucFI

Eminem took a knee during the halftime show: https://cbsn.ws/3gP5tY8

Wow, YES: Here’s a photo of Martha Stewart at the Super Bowl. She’s posing for what appears to be a spontaneous photo with Guy Fieri. Photo: https://bit.ly/3JoZcii

A QUICK CATCH-UP ON THE COMMERCIALS:

Via Yahoo Sports’ Liz Roscher, here are some of the best and worst commercials: https://yhoo.it/34D3ILn

From The Hill’s Dominick Mastrangelo: https://bit.ly/3HO6YC4

This is a very good read:

Stat News’s Helen Branswell writes, “Two years into the Covid-19 pandemic, it’s easy to lament all that has come to pass. The devastating losses. The upending of what we regarded as normal ways of life. The sheer relentlessness of it all.”

“But let’s stop for a moment and consider something else that may have escaped you: You have witnessed — and you are a beneficiary of — a freaking miracle. That miracle is the development, testing, manufacturing, and global distribution of Covid vaccines.”

More on “why Covid-19 vaccines are a freaking miracle”: https://bit.ly/3rN1bab

Pfizer is putting a pin in it for now:

Via NBC’s Berkeley Lovelace Jr., Pfizer and BioNTech are delaying their Food and Drug Administration (FDA) request to authorize the COVID-19 vaccine for children under 5 years old. https://nbcnews.to/3uQ5OCi

Why?: “Pfizer said on Friday that it will wait for its data on a three-dose series of the vaccine, because it believes three doses ‘may provide a higher level of protection in this age group.’”

What’s the timing now?: The data on a third dose is expected in April.

What this means for families: “The move means that vaccines for this age group will not be available in the coming weeks, a setback for parents eager to vaccinate their young children.”

More on what we know: https://nbcnews.to/3uQ5OCi

Total number of vaccinations administered in the U.S.: 547 million shots have been given.

This is an entertaining thread: 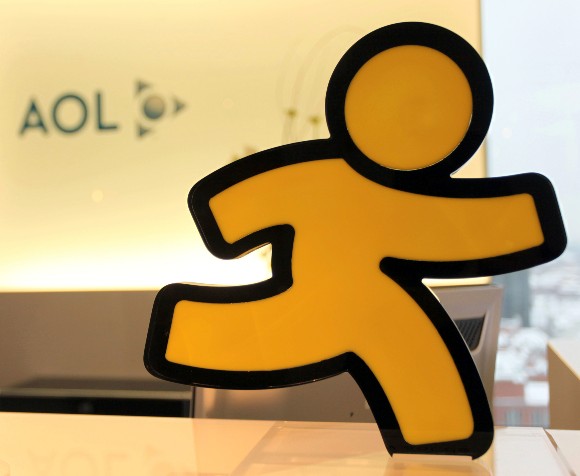 Stand for America’s Kassy Dillon tweeted, “In honor of that nostalgic halftime show, everyone spill your AIM screen names.” Enjoy the responses: https://bit.ly/3gPdz2Y

Starbucks tweeted, “Reasons the Starbucks app is better than a dating app: No photos of people holding fish, Won’t ghost you or leave you on read, Always remembers your birthday, Knows your coffee order by heart.” https://bit.ly/3HOphXv

The White House is decked out for Valentine’s Day: 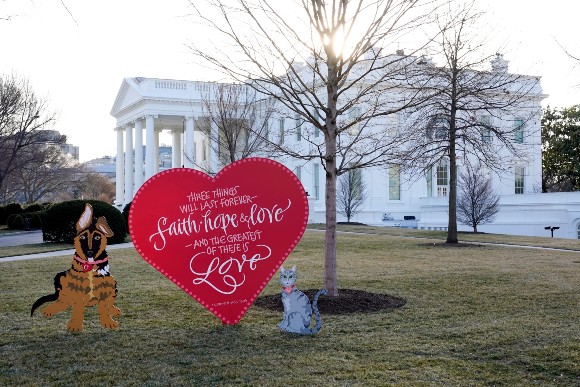 The House is out. The Senate is in. President Biden and Vice President Harris are in Washington, D.C.

And to brighten your Monday, here’s a dog auditioning for The Lion King: https://bit.ly/3oPk1f4