President Obama asked Hillary Clinton to stay on for an extra year as secretary of State after he won reelection.

Obama was worried at the time about losing both Clinton and Leon Panetta, his outgoing Defense secretary, according to an excerpt released Thursday of HRC: State Secrets and the Rebirth of Hillary Clinton by The Hill’s Amie Parnes and Politico’s Jonathan Allen.

{mosads}Would you reconsider, perhaps stay another year? Obama asked  Clinton aboard Air Force One during a trip to Southeast Asia on Nov. 19, 2012.

No, said Clinton, who had decided to leave public office and is now widely expected to run to succeed Obama in 2016.

Obama pressed Clinton one more time during the flight, asking if she might stay just a little longer, if not a year.

Clinton again said that didn’t suit her, and Obama gave up, according to the book, which will be released in February by Crown Publishing.

Clinton left the Obama administration on Feb. 1 and has since kept a relatively light schedule.

She joined the Bill, Hillary and Chelsea Clinton Foundation earlier this year and has been advocating causes for women and girls, among other issues.

She has also given several paid speeches and campaigned this week with Terry McAuliffe, an old friend of the Clintons who is the Democratic candidate for governor in Virginia.

By leaving Foggy Bottom at the beginning of Obama’s second term, Clinton gave herself time to decide whether to make a second run for the White House in 2016.

Most observers think the Democratic nomination is hers for the taking. On Wednesday, a letter encouraging her to run signed by every female Democratic senator became public. The letter was organized by Sen. Barbara Boxer (D-Calif.) and was intended to be a private show of support from Clinton’s former colleagues in the Senate.

Its existence was revealed by Sen. Kay Hagan (D-N.C.), who mentioned it at an event earlier this week. 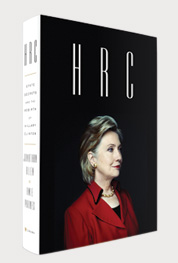 The following is excerpted from the upcoming HRC: State Secrets and the Rebirth of Hillary Clinton:

“High above the jungles of Southeast Asia on November 19, 2012, in the president’s private cabin aboard Air Force One, President Barack Obama and Secretary of State Hillary Clinton reminisced like longtime friends about their last five-plus years together, dating back to the 2008 campaign.

But as they sat in the cabin, one on one, he wanted to ask her about the future, too.

Hillary had long since told Obama that she didn’t plan to stick around for his second term. But now, after winning re-election, he didn’t want to let her go.

Hillary had proved herself a vital ally during the first term and the pair of one-time rivals had gotten into a rhythm. Why end a good thing? Also, Defense Secretary Leon Panetta had told Obama on Election Day that he was leaving — meaning the president would have to find new lieutenants for both of the top seats in his war council if he couldn’t convince Hillary to stay put.

Would you reconsider, perhaps stay another year? Obama asked.

No, Hillary said. It was time for her to leave public office.

Even though he had refused repeatedly to take no for an answer in getting her to take the job in the first place, Obama pressed just once more, lightly, asking if she might stay just a little longer. That didn’t suit her, either. Obama gave up.”

by Natalie Prieb 1 day ago
News  /  1 day ago
Administration

When will Americans feel the impact of the Inflation Reduction Act?