An overwhelming majority of Americans believe that cities that arrest illegal immigrants for crimes should be required to turn them over to federal authorities.

The poll shows that President Trump has broad public support in his effort to crack down on sanctuary cities.

A survey from Harvard–Harris Poll provided exclusively to The Hill found that 80 percent of voters say local authorities should have to comply with the law by reporting to federal agents the illegal immigrants they come into contact with.

{mosads}As it stands, hundreds of cities across the nation — many with Democratic mayors or city councils — are refusing to do so.

Kelly is expected to hire thousands of new immigration enforcement agents with broad authority to detain and deport those in the country illegally, potentially setting up a showdown between the federal government and sanctuary cities.

The Harvard–Harris Poll survey found strong support for an overhaul of the nation’s immigration laws, with 77 percent saying they support comprehensive immigration reform against only 23 percent who oppose.

“While there is broad support for comprehensive immigration reform, there is overwhelming opposition to sanctuary cities,” said Harvard–Harris co-director Mark Penn. “The public wants honest immigrants treated fairly and those who commit crimes deported and that’s very clear from the data.”

The finding is one of several in the survey that show Trump has support for some of the controversial immigration proposals that were a hallmark of his campaign. 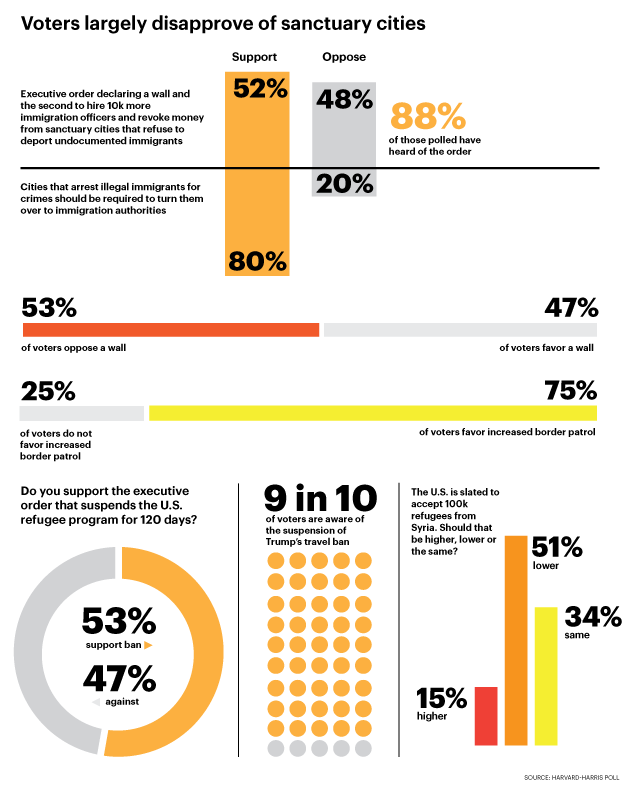 A majority — 52 percent — say they support Trump’s two executive orders allowing for the construction of a southern border wall, increasing the number of immigration officers by 10,000 and finding a way to revoke federal funds for sanctuary cities.

The crackdown on sanctuary cities is the most popular feature of those actions, followed closely by the directive to increase the border patrol, which is backed by 75 percent of voters.

The wall is the most divisive element of Trump’s plan, with 53 percent opposing its construction.

Kelly has said the administration will roll out a “tighter, more streamlined version” of the executive order some time soon.

Trump’s new order is expected to target the same seven countries but will not include people who already have a visa to travel to the U.S. It will also exempt green card holders who are citizens of one of the countries in question.

Fifty-six percent say they support the specific aspect of Trump’s order that pauses immigration from the seven countries on the terrorism watch list until a new vetting system is in place.

Support for that policy goes up to 60 percent when the seven nations are described as “Muslim majority countries.”

Voters are worried that the federal judge’s suspension of Trump’s order — a ruling that was upheld this month at an appeals court in San Francisco — could put the nation at risk.

A plurality — 38 percent — say the federal judge’s suspension makes the nation less safe. Thirty-six percent said the court’s ruling will have no impact, and 26 percent said it will make the country safer.

The survey also found there are deep concerns among Americans over refugees fleeing their homelands for safety in the U.S.

Forty-seven percent said allowing refugees into the country has a negative impact on the nation, compared to only 33 percent who said it has a positive effect.

“Americans support both comprehensive immigration reform and stronger vetting and reduced refugees — they want a mix of compassion, strong borders,” said Penn. “They see ISIS as the greatest threat to the country and that is spurring concerns about refugee migration.”

The online survey of 2,148 registered voters was conducted between Feb. 11 and 13. The partisan breakdown is 39 percent Democrat, 30 percent Republican, 27 percent independent and 5 percent other. The Harvard–Harris Poll survey is a collaboration of the Harvard Center for American Political Studies and The Harris Poll.

Harris calls for tighter gun restrictions ‘to end this horror’

Why some aren’t buying Democrats’ ‘go vote’ message on abortion